Azadi March shall be carried out at any cost, says Maulana

Maulana has announced to lead the Azadi March at any cost. The government has allowed the protest to be carried out according to the law and verdicts of the IHC and SC. 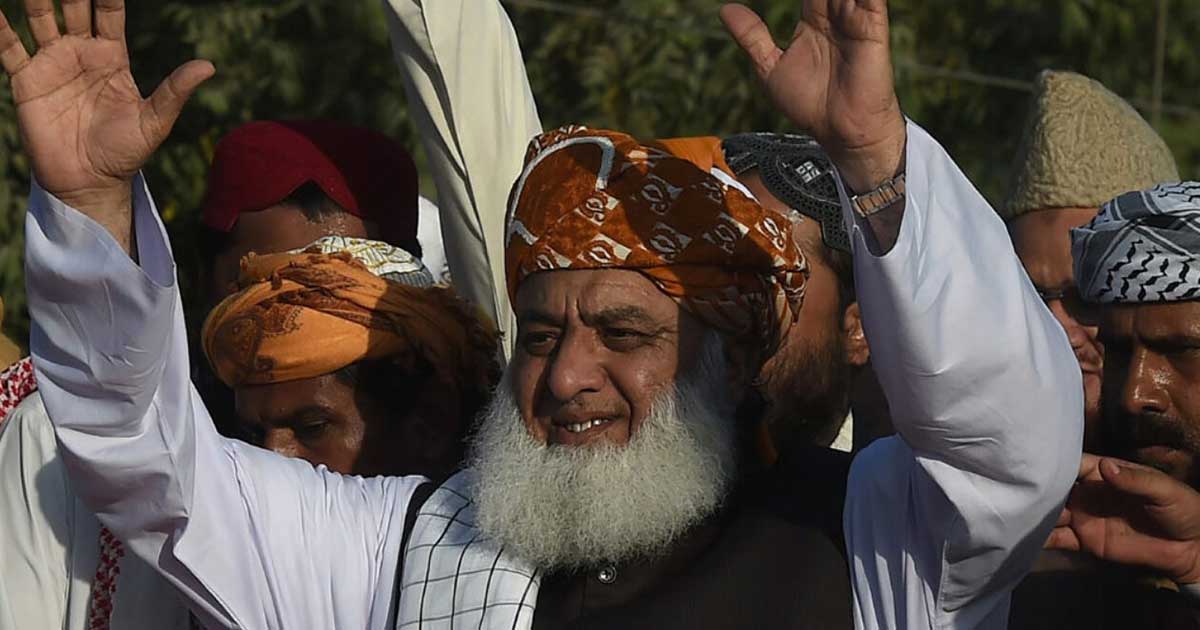 Maulana Fazlur Rehman, chief of the Jamiat Ulema-i-Islam (JUI-F), has once again clarified that he will hold a protest in the federal capital at any cost. He has ruled out any change in the schedule of ‘Azadi March’ “come what may”. Sources claim that the JUI-F was advised to review its decision since Pakistan can not afford a disruption at the moment. However, Maulana has refused to consider any suggestions and has announced to topple the government which, he believes, was elected though unfair means.

He was talking to journalists at Gulshan-i-Shaheed Jamia Islamia on Friday, when he revealed that the houses of his party’s central committee members and those of provincial leaders were being raided throughout the country.

Moreover, Maulana said he was not hopeful about the success of talks being held with the government. “If barricades and other obstacles are placed, it will trigger clashes. But come what may, the march will take place. No matter if highways remain closed for one month, we will move to Islamabad,” the JUI-F chief expressed his resolve.

After criticism from all walks of life, Maulana changed the date and announced to lead a march in Islamabad on 31st  October

He accused the government of harassing transporters, small shopkeepers and petrol pump owners. The allegation has been rejected by the government.

Prime Minister Imran Khan announced on Wednesday that the marchers would be allowed to proceed with their protest and that the opposition agreed to hold talks with the government’s negotiating team. The premier reportedly made it clear that it was the opposition’s right to hold protests since Pakistan is a democracy.

Maulana who wanted to be political relevant from the outset has now found some space to demand something substantial from the government. There is a growing perception created through some media houses, anchors and social media accounts as if Maulana has a tremendous political support from across the country. Political commentators believe that such perception is quite misleading. “PM Imran Khan is an elected member of the assembly and an elected PM. How can a party whose chief could not manage to become a member of the assembly threaten the government to topple?” asked a political analyst.

It is important to recall that in July the JUI-F’s chief announced to topple the government if the premier and his cabinet do not step down. He also said that it was the last protest in Quetta and there was going to be freedom march in the months to come. He said: “this is our last long march and next will be our Freedom March in Islamabad if the PTI government does not resign in August. After holding 14 successful million marches across the country, today we have arrived in Quetta and this sea of people shows what the people of Pakistan want.”

After consultation with the opposition parties, Maulana postponed his proposed Azadi March from August to October. Initially, it was 27th Oct which Pakistan celebrates every year as Kashmir Solidarity day. After criticism from all walks of life, Maulana changed the date and announced to lead a march in Islamabad on 31st  October.

Pakistan Muslim League-Nawaz (PML-N) and Pakistan People’s Party (PPP) have announced to join the March. There is a widely held perception that both parties are becoming a part of the protest due to their respective disagreements with PM Imran. Reliable sources told GVS that the premier has declined all the requests of giving any concessions to former President Asif Ali Zardari and Former Prime Minister Nawaz Sharif in corruption cases. Through these protests, sources claim, the PPP and PML-N are pressuring the premier to sign a deal with them.

Read More: Is Maulana Fazlur Rehman Eager to be Arrested?

But both parties have rubbished such claims and maintained to be the guardians of masses. “We are heading towards Islamabad because we want to save this country,” said PML-N’s senior leader Ahsan Iqbal.

Shibli Faraz, the Leader of the House in the Senate, recently remarked that the JUI-F appears to want to be arrested in order to “emerge as a hero”, however, the Imran Khan-led government has no intention of arresting Maulana Fazlur Rehman.

Meanwhile, the PTI-led government has banned a subsidiary group of JUI-F – Ansarul Islam – with an immediate effect and the federal government has sent a summary to the authorities concerned in this regard. In no time, the parade and ‘salute’ simultaneously turned into scare and joke across social media.