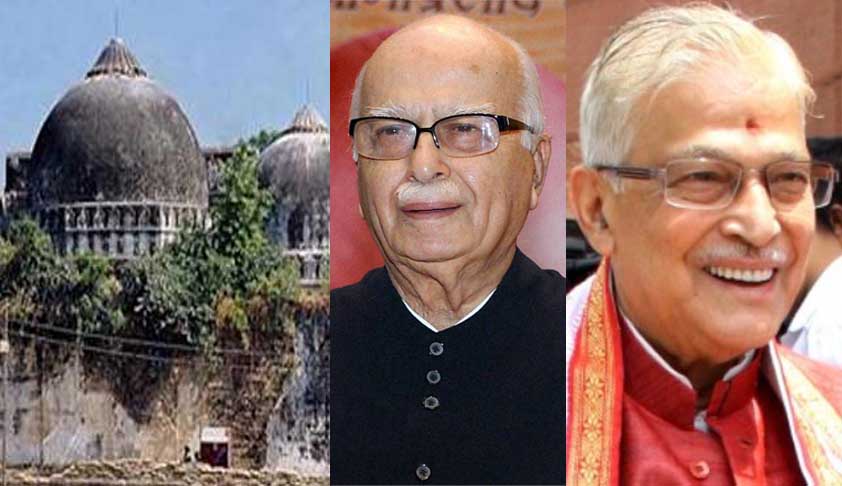 A day after a special CBI court charged the Union Minister for Water Uma Bharti, as well as Lal Krishna Advani and M M Joshi (prominent leaders of the ruling Bhartiya Janta Party) over the Babri Masjid case, cabinet members of the government have come out in full support of the accused.

Union Minister M Venkaiah Naidu expressed his confidence in the acquittal of the trio. The three BJP stalwarts were charged with criminal conspiracy of inciting violence in 1992 which led to the demolition of the mosque. The allegations, however, were vehemently denied by one of the accused, Minister Uma Bharti.

The Firstpost quoted that BJP MP Sakshi Maharaj said “no power on earth” could stop the construction of the Ram temple in Ayodhya.

“It was an open movement like the movement against the emergency. I don’t see any conspiracy,” she said.

She asserted that she was present there just like so many other political workers from BJP and other parties.

BJP leaders including the accused have wanted to build a temple on the site of the razed mosque, something which petrifies the Muslims.

The Congress has demanded the resignation of Uma Bharti in order for the inquiry to be fair and transparent.

Uneasiness has again crept in after the appointment of the bigoted Yogi Adityanath as chief minister of Uttar Pradesh.

Violence over the mosque started as back as 1853, but the British Colonial administration constructed railings to split the places of worship, allowing the inner area for Muslims and outer for Hindus. This was practiced for 90 years.

The suspicions regarding him are not unfounded. According to NDTV Yogi Adityanath offered prayers at the makeshift Ram temple at the disputed Ram Janmbhoomi – Babri Masjid site for nearly 10 min. Besides, he greeted the BJP heavyweights with flowers when they appeared in the CBI court. This is something which would not allay the fears of the Muslims. They would see a potent state-backing of violence perpetrated on the Muslims; a severe dent to India’s secular credentials.

The issue of the Babri Mosque has been an incendiary one the Hindus and Muslims of Ayodhya, Uttar Pradesh. The demolition on 6th December 1992 led to violent riots which resulted in the loss of about 2,100 lives. The issue arose out of the belief that the mosque which was constructed by the Mughal Emperor Zaheer Uddin Babur in 1528 stood on the birthplace of Lord Rama. Violence over the mosque started as back as 1853, but the British Colonial administration constructed railings to split the places of worship, allowing the inner area for Muslims and outer for Hindus. This was practiced for 90 years.

However, in 1949 peace between the two communities was impeded as Lord Rama’s idol was placed inside the mosque, leading to many legal feuds for decades. Nehru was perturbed at the placement of the idol. “I am disturbed at developments at Ayodhya,” Nehru said in a telegram on Dec. 26, 1949, to Govind Ballabh Pant, chief minister of United Provinces, which roughly included what is now the state of Uttar Pradesh. “Earnestly hope you will personally interest yourself in this matter. Dangerous example being set there which will have bad consequences.”

The events leading up to the demolition were bloody, to say the least, as scores of Muslims were killed over rumors of inciting violence in the city in October 1990.

The issue achieved national status in the 1980’s when the Vishva Hindu Vishwa Hindu Parishad got its act together to confront the “Islamic Threat”. In 1984, A committee was formed spearheaded by Vishwa Hindu Parishad party (VHP) under the leadership of Bharatiya Janata Party leader Lal Krishna Advani. The aim of the committee was to set free the birthplace of Lord Rama by constructing a temple in honor of the Lord. In 1986, after almost five decades, a district judge ordered to open the gate and allow Hindus to worship inside the mosque which was once announced as the disputed structure. In less than 60 minutes of the court’s order, the gates were opened. In protest of the order, Babri Mosque Action Committee was formed.

The ascendancy of the BJP hastens the process of evicting the mosque. The BJP saw its seats in Parliament jump to 85 from two, according to election commission results. It used its new power to support the new government and give it a working majority in Parliament. That gave the BJP huge leverage which it would exercise, over Ayodhya, in the following months. It eventually formed the government in Uttar Pradesh in 1991.

The events leading up to the demolition were bloody, to say the least, as scores of Muslims were killed over rumors of inciting violence in the city in October 1990.

With the central government in tatters after the death of Rajiv Gandhi, and the inability of the then newly appointed PM, Narisma Roa to control the situation resulted in the carnage of 6th December 1992.

Today, after a lapse of 25 years, Hindu vigilante is on the rise; intolerance is creeping in as evidenced by the marginalization of Dalits. India highly touted secular and democratic credentials are being compromised. Seemingly it appears that democratic norms and accountability mechanisms are strong enough to apprehend leaders of the ruling party, but the vociferous backing by BJP raises doubts on its willingness to ensure that justice is done. The rise of Hindutva ideology is well and truly complete.

US airstrikes are killing more civilians than terrorists