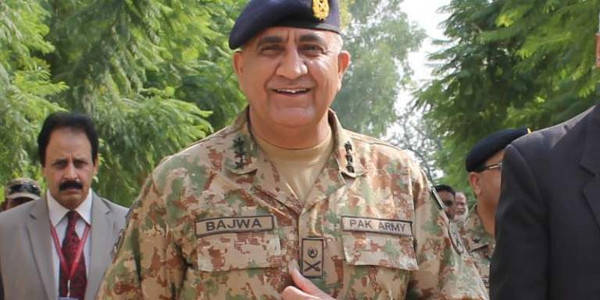 In what appears to be a surprise for the political commentators of South Asia, a think tank has divulged that Pakistan’s military was in a bid to cement ties with its arch-rival, India. The UK-based Royal United Services Institute (RUSI), in its chilling report, has stated that the General Bajwa-led military is reaching out to India because it believes that the way to peace and prosperity is through cooperation with Narendra Modi-led country.

The findings also mention that Pakistan’s military was eyeing better relations with India, though the state oppression in the restive region of Kashmir was underway. The study alludes to Chief of the Army Staff Gen Qamar Javed Bajwa’s invitation to Sanjay Vishwasrao, the Indian military attaché, and his team to attend the Pakistan Day military parade in Islamabad, which they honored.

Weeks after the March parade, Gen Bajwa had said that the Pakistan military wanted peace and dialogue with India. What gives credence to the mature gesture extended by the military is the fact that during a visit to Britain in 2017, Gen Bajwa addressed a gathering at RUSI and announced that the Pakistan army was no more insecure now and feels confident about its future.

But Pakistan’s military has also warned India not to confuse its wish for peace, with its weakness. In July 2016, General Bajwa had blatantly remarked that the Nasr missile had put cold water on cold start – a doctrine of Indian military against Pakistan.

Taking a strong exception to mending ties with its eastern neighbor, Gen Bajwa had also welcomed Indian participation in Pakistan’s multi-billion dollars infrastructure project, the China-Pakistan Economic Corridor (CPEC). Although both the nuclear-armed neighbors have been constantly engaged in border skirmishes, the report highlights that efforts have been made in past to forge relationships and Pakistan military’s efforts are well acknowledged in New Delhi as well.

The wide-scale operations launched by the military in Federally Administered Tribal Areas (FATA) have brought security and stability on the western border, with Afghanistan and according to the report, the military is now encouraged to approach India to boost the regional trade.

Not just the role of Gen Bajwa is portrayed in favorable light, for having defied the baggage of history, and to move forward, Major General Ahmed Hayat, the Ex-Director General of Analysis wing of the Inter-Services-Intelligence (ISI), has also been mentioned in the report with the hopes that his plan ‘could come to fruition this year’. But if this plan was first devised by the ex-head of the Analysis wing in Intelligence (ISI) then it clearly bears an institutional mark – instead of just Gen. Bajwa’s personal thinking.

The RUSI report, authored by the military analyst, Kamal Alam, terms the strategy to reach out to India, devised by Gen Hayat as ‘India Plan’; believed to have been made in 2013. Moreover, the report also underlines the role of Lieutenant General Aamir Riaz, formerly heading Southern Command at Quetta, and currently serving as Corps Commander Lahore, stating that the senior official headed the first ever high-level contact group with India as Director-General Military Operations.

The study alludes to Chief of the Army Staff Gen Qamar Javed Bajwa’s invitation to Sanjay Vishwasrao, the Indian military attaché, and his team to attend the Pakistan Day military parade in Islamabad, which they honored.

Kamal’s observations regarding Gen Aamir seem to be factual as the said military general had invited India to join China Pakistan Economic Corridor (CPEC). When tensions were running high between Pakistan and India, in 2016, Gen Aamir had asked India to take part in CPEC and ‘share the fruits of future development by shelving the anti-Pakistan activities and subversion’.

The report also notes that so far, India has rejected Pakistan’s offer of a transit trade dialogue on Afghan-Indian commerce but hastens to add that a continuous effort by the top brass of military can turn the table and cajole India to talk to Islamabad. Having the backdrop of Sub-Continent’s partition in mind, Pakistan and India have always been uneasy neighbors but sporadically, their leaders have tried to come close at a personal level to reflect the empathy in state relations.

In the 1980s, Gen Ziaul Haq, and then Indian Prime Minister, Rajiv Gandhi, came close, however dialogue gets stuck when it comes to talking details. Benazir Bhutto and Nawaz Sharif in 1990’s and Musharraf between 1999 and 2007 faced similar deadlocks. Indian policy makers have often defined Pakistan Army as the stumbling block; they have tried courting Pakistani civilian leadership – like Asif Ali Zardari & Nawaz Sharif – for making inroads. Pakistani analysts point out that Indians rely upon Pakistani politicians to isolate Pakistani institutions like Foreign Office and Army that come up with structured ideas for discussions. Another view is that Indias play with optics to send the message the international community and lay publics that they are very eager to engage Pakistan but in reality they don’t see it in their interest to engage a strong Pakistan – and will rather wait for a weekend and divided Pakistan to negotiate with. Indian hostility towards CPEC thus reflects that strategic mindset.

In the 1990s Nawaz Sharif and then Indian President Atal Bihari Vajpayee maintained a cordial relationship. Moreover, retired Gen Pervez Musharraf and Atal Bihari Vajpayee also came close at a 2002 summit in Agra over the issue of Kashmir, despite the fact that both the countries were locked in an eyeball-to-eyeball standoff in Siachin, a few years ago.

The report, which can be pleasant for the doves across Pakistan and India, and shocking for the Hawks in the region, visibly implies that the much talked about ‘Bajwa Doctrine’ was at play. Though the details about the doctrine, believed to be the perspective of the incumbent military chief, have not been revealed, Major Asif Ghafoor, the Director General of Inter-Services Public Relations, had expressed in a press conference that the doctrine pertains to the security-related matters.

Federally Administered Tribal Areas (FATA) have brought security and stability on the western border, with Afghanistan and according to the report, the military is now encouraged to approach India to boost the regional trade.

“Every army chief has their own perspective and General Bajwa’s is to promote peace which existed in the past. That is what the Bajwa doctrine is,” revealed the ISPR DG in March. Having the RUSI report in mind, the implementation of Bajwa Doctrine seems to be in effect as in a recent address, Gen Bajwa had expressed that Pakistan believes the route to peaceful resolution of Pak-India disputes runs through comprehensive and meaningful dialogue.

But Pakistan’s military has also warned India not to confuse its wish for peace, with its weakness. In July 2016, General Bajwa had blatantly remarked that the Nasr missile had put cold water on cold start – a doctrine of Indian military against Pakistan.

Whether the efforts of Pakistan’s military become futile or fruitful is a matter of time, however, the establishment, believed to be the major obstacle to stronger Pak-India ties, has proved that the ball was in the court of India to usher a new era of development with Pakistan or to continue harboring the grudge.