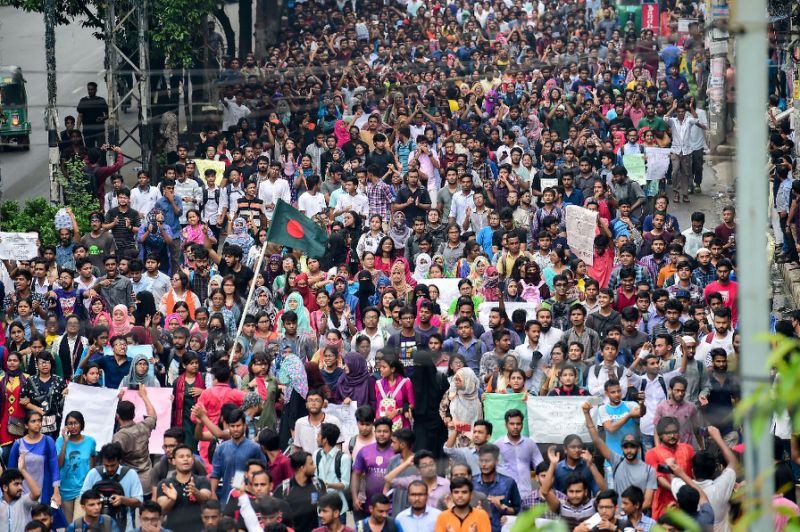 Bangladesh on Monday promised to introduce the death penalty for deliberate road deaths in a bid to quell more than a week of demonstrations calling for better road safety, as new student-led protests were met with tear gas and rubber bullets. Over the weekend scores of people were hurt as police fired tear gas and mobs apparently loyal to the government attacked demonstrators, photographers, and even the US ambassador’s car.

The tens of thousands of teenage school pupils and university students who have paralyzed the capital Dhaka and elsewhere for the past nine days and torched eight buses are pressing for better road safety after a speeding bus killed two teenagers on July 29. The latest clashes on Monday in the Rampura neighborhood saw police use tear gas to dispel hundreds of students from a private university, local police chief Rafiqul Islam told AFP.

The lengthy standoff, attracting foreign media interest and criticism from the UN and rights groups, has turned into a major test of Prime Minister Sheikh Hasina’s government ahead of December elections

“They tried to set ablaze a police camp. We fired tear gas to disperse them,” he said, adding four police officers were injured. Students told AFP that police fired rubber bullets at protesters in Bashundhara neighborhood, which is home to two private universities, and that members of the student wing of the ruling Awami League party attacked the protesters with sticks and bricks. “The situation is very bad.

We have carried at least three students to the nearby Apollo Hospital,” one student, Z. Mallick told AFP. At least 40 people were injured during the clashes at Bashundhara, reported local English-language newspaper Daily Star. The lengthy standoff, attracting foreign media interest and criticism from the UN and rights groups, has turned into a major test of Prime Minister Sheikh Hasina’s government ahead of December elections. On Monday the law and justice minister Anisul Huq told AFP the cabinet has approved a new law allowing for the death penalty “if an investigation finds that the death in a road accident has been caused deliberately”.

The protests took a violent turn in Dhaka on Saturday, with more than 100 people hurt as police fired rubber bullets at demonstrators, according to students and doctors who treated the injured. The authorities have shut down mobile internet services across swathes of the country and Hasina urged students to go home, but to no avail. A car carrying US ambassador Marcia Bernicat was on Saturday attacked by armed adult men, but she escaped unscathed, the embassy said.

Alam is the founder and managing director of the Drik Gallery and the creator of the Pathshala South Asian Media Institute, a photography school in the capital Dhaka that has spawned hundreds of photographers.

On Sunday dozens of protesters were attacked by people alleged to be ruling party activists, some armed with machetes, leaving scores injured including half a dozen photographers. The US embassy said separately that while it did not condone “senseless property destruction nothing can justify the brutal attacks and violence over the weekend against the thousands of young people who have been peacefully exercising their democratic rights in supporting a safer Bangladesh.”

Rights group Amnesty International called on the government to stop its “violent crackdown” on “overwhelmingly peaceful student protestors”. It also called for the immediate release of Shahidul Alam, 63, a renowned Bangladeshi photographer who was detained on Sunday night after giving an interview to Al Jazeera about the protests.

“We are interrogating him for giving false information to different media and for provocative comments,” police official Moshiur Rahman told AFP. Alam said he was beaten in custody. “(They) washed my bloodstained Punjabi (tunic) and made me wear it again,” he said as he was taken into a Dhaka court.

Read more: War against its own: UN concerned for students in Bangladesh protests

According to his colleague Abir Abdullah, Alam, whose photos have appeared widely in Western media, was taken away from his Dhaka home by at least 20 plainclothes police. Alam is the founder and managing director of the Drik Gallery and the creator of the Pathshala South Asian Media Institute, a photography school in the capital Dhaka that has spawned hundreds of photographers. In recent days, Alam shot images of the demonstrations by tens of thousands of teenagers in Dhaka and beyond, and discussed the protests on Facebook Live.

Could PML-N be finally thinking about “minus-Nawaz formula”?

Pakistanis don’t let me pay for any thing: Binsky, US travel blogger