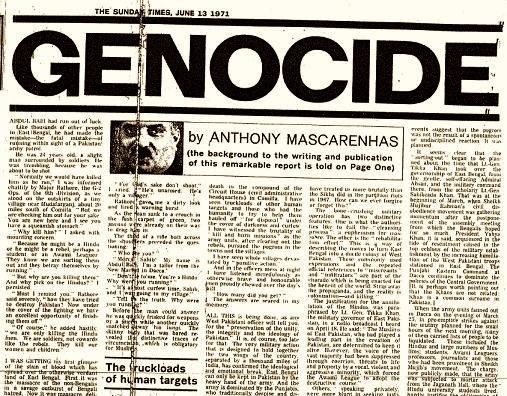 The Bangladesh High Commission in Islamabad has commemorated March 25 Day with a 1-minute silence and shown a documentary to the members of the commission and few of its expat community.

Sheikh Hasina’s government has declared March 25 as the genocide day after a parliamentary resolution that was voted for on March 11. Liberation war affairs minister AKM Mozammel Huq has also stated that Bangladesh will petition the United Nations by the end of March for an international recognition of the 9 December Genocide Day to be March 25 instead, which marks the day that the Pakistani army launched its ‘Operation Searchlight’ against insurgents of the then East Pakistan creating a lawlessness situation in Dhaka.

Bangladesh will petition the United Nations by the end of March for an international recognition of the 9 December Genocide Day to be March 25.

The Genocide Day is being commemorated to honor the martyrs of the “worst genocide” in recent history. A fully-fledged observance of the Genocide Day was impossible for Bangladesh this year due to the time constraints after the recent adoption of the day. However, the government is holding a two-day exhibition, at Suhrawardy Udya, with rare photos of the killings that took place. Next year the Bangladeshi government is planning to commemorate the day on an elaborate scale.

Bangladesh claims that in 1971, Pakistani army had carried out a crackdown in the middle of the night killing hundreds unarmed, “freedom loving” Bengalis. It alleged the army attacked the Dhaka university halls, East Pakistan rifles headquarters, the Rajarbagh Police lines, and the old Dhaka as well.

On the same night, residential quarters of the Dhaka University teachers were also raided and it claims that many students and teachers were killed. Attacks also took place against the newspaper offices in Dhaka, including Dainik Ittefaq, and Sangbad. Similar attacks have been claimed were made in the port city of Chittagong which killed many people as well.

Read more: Has anyone been held accountable for the catastrophe that created Bangladesh

To What Extent are These Allegations True?

These facts along with the alleged millions killed by the Pakistani army were first claimed in 1972 by the then independent Bangladeshi government; yet have never been verified. Sheikh Mujeeb ur-Rahman, right after taking power, constituted a Commission on 29th January 1972 to locate mass graves and other verifiable evidence to support evidence the f claim.

Western sources at the time put numbers dead around 50,000 as well. The Peace Research Institute in Norway along with Uppsala University of Sweden in their findings in 1972, estimated that about 58,000 people died in 1971.

The Commission comprised of representatives from the Bangladesh Army, Border Security Force, Rangers, Police and Civil Administration. Despite their best efforts, this Commission completely failed to locate any mass graves or other evidence of any kind to substantiate the claims. After several months of work, what the commission came up with was a figure of maximum 56,743 deaths as a result of the 1971 insurgency.

Other western sources at the time put numbers dead around 50,000 as well. The Peace Research Institute in Norway along with Uppsala University of Sweden in their findings in 1972, estimated that about 58,000 people died in 1971. Western Journalists suggested even lower numbers: in June 1972, William Durmmond in the LA Times reported that “……. the figure of 3 million deaths is an exaggeration so gross as to be absurd ……  no more than 25,000 people died.”

Sharmila Bose, the famous Bengali Indian writer and Research Associate at Oxford University, writes in her book, “Dead Reckoning” in 2011, “…. the number 3 million appears to be not more than a gigantic rumor”. She estimated that around 50,000 – 100,000 people including Bengalis, Beharis and West Pakistanis may have perished in the conflict in East Pakistan.

As Ikram Sehgal recently pointed out in his article printed in Global Village space, that the Pakistani government made an error at the time in rounding up and deporting foreign journalists – who would have substantiated what actually happened on ground.

The politics in declaring March 25 as Genocide day lie more in Bangladesh’s own current politics and less in the reality of the situation or even with its current poor relations with Pakistan.