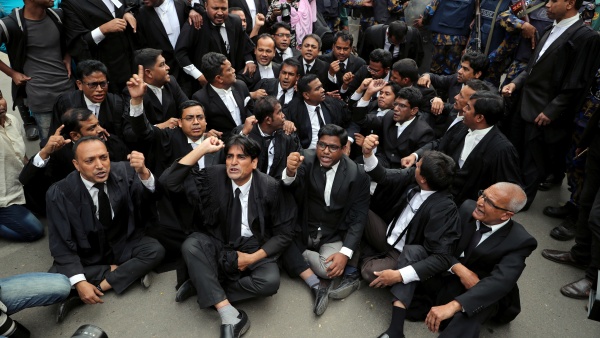 Bangladesh has drawn global attention as it struggles to manage the ongoing humanitarian crisis caused by nearly one million forcibly displaced Rohingya who has fled to escape violence in neighboring Myanmar. While international organizations and other countries have focused on how they can further support the Bangladeshi government’s response to the crisis, they have paid less attention to the country’s growing political dysfunction.

The U.S. Department of State’s most recent human rights reports documents the increasingly harsh political tactics of Prime Minister Sheikh Hasina and her ruling Awami League since coming to power in 2008. The Awami League is accused of silencing critics using repressive measures such as attacking media outlets, co-opting the judiciary, and jailing political opponents. The primary opposition party, the Bangladesh Nationalist Party (BNP), is also accused of coordinating large-scale violence during its general election boycott in 2013–2014 that killed scores.

Only Bangladeshis themselves can repair the country’s flailing democracy. And with only six months before elections, international aid alone will not transform Bangladesh’s political and electoral system.

These political rivalries have undermined fair electoral competition. In February, BNP Chairperson Khaleda Zia was sentenced to five years in prison on corruption charges in a case the opposition considered partisan. The verdict could bar Zia from competing in the upcoming elections as the country’s constitution disqualifies a person sentenced to more than two years’ imprisonment from standing. The conviction could also lead the BNP to boycott the elections expected before January 2019, as it had five years ago.

Furthermore, personal security is poor. Bangladeshi women, in particular, report living in fear of sexual assault with little recourse for justice. Citizens identify corruption, political violence, and nontransparent elections as key grievances. Yet despite a negative view of the quality of democracy and political parties in their country, Bangladeshis retain a positive view of democracy as a system.

The Awami League and the BNP have an opportunity this election cycle to renew Bangladesh’s democracy, serving as effective, responsible, and responsive governing and opposition parties. However, this will require the parties to realign their priorities and build institutional capacity.

The primary opposition party, the Bangladesh Nationalist Party (BNP), is also accused of coordinating large-scale violence during its general election boycott in 2013–2014 that killed scores.

Now is the Time to Expand These Efforts. Here are a Few Ideas

Create space for productive political dialogue. Responding to a 2017 IRI poll that showed 66 percent of Bangladeshis wanted the Awami League to seek input from other parties, IRI has conducted a series of dialogues with the major political parties designed to build trust and facilitate conversations on key political and security issues as well as find areas of commonality. IRI’s interparty dialogue program has received significant support from senior-level politicians despite the hostile rivalries that exist among the political parties.

Engage youth in nonpartisan political activity. Over the coming year, IRI will expand the scope of its political dialogue program to youth, holding a series of seminars on university campuses to encourage young people to discuss political issues in a nonpartisan and constructive manner.

Support the integrity of the electoral process. During past elections, IRI has led international election observation missions, trained and supported domestic election observers, and conducted civic and voter education. Having informed and watchful international and domestic actors can deter election fraud and violence.

Develop the capacity of civil society and media. In the past, IRI has worked with civil society and the media to strengthen their ability to monitor and build public awareness of political and electoral corruption before, during, and after elections.

Read more: Bangladesh: Why Nawaz Sharif has a poor understanding of history

Help build the capacity of state institutions. An ineffective or partisan security sector and election commission can undermine trust in election outcomes and spur election violence. International actors can work to enhance capacity in these institutions with training and advice on best practices.

Ultimately, only Bangladeshis themselves can repair the country’s flailing democracy. And with only six months before elections, international aid alone will not transform Bangladesh’s political and electoral system. But if properly targeted and funded, it can help keep open enough political space to allow for a substantive debate between and among citizens and parties on the serious issues that affect the country. This would be progress.

Steve Cima is resident program director for Bangladesh and Sri Lanka and Geoffrey Macdonald is a principal researcher for democracy and governance at the International Republican Institute. This article was first published in cfr.org and is republished with permission. The views expressed in this article are author’s own and do not necessarily reflect the editorial policy of Global Village Space.

Pakistan to get 17.2mn doses of COVID-19 vaccine, confirms Covax