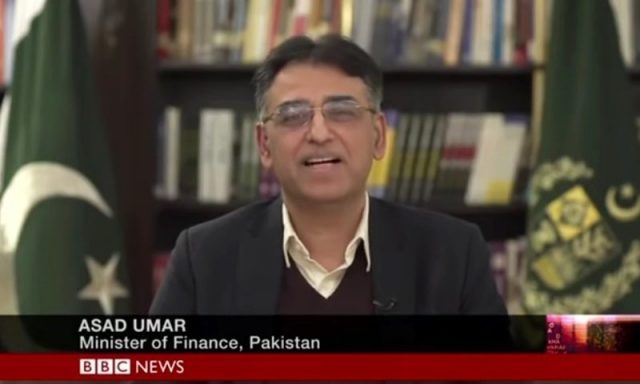 The British Broadcasting Corporation (BBC) has finally broken the ice and clarified that the omission of Kulbhushan Yadev’s mention from the interview of Pakistan’s Finance Minister Mr. Asad Umar was merely a technical issue. BBC clarified that it was “not an act of censorship” and that it was edited out because the program was too long to be broadcast on TV.

It is important to mention here that in an interview with BBC’s Stephen Sackur for the well-known show Hardtalk, the minister answered questions regarding various issues of national importance. The TV version of the interview, however, did not contain his mention of Kulbhushan Yadav.

I am from the cadre of the engineering department of Indian Navy and my cover name was Hussein Mubarik Patel, which I had taken for doing some intelligence gathering for Indian agencies.

Since the BBC did not mention the part which was politically very important for the present government it raised many questions. Things became controversial when human rights minister Shireen Mazari sharply criticized the BBC for allegedly censoring the interview and deleting the part about Jadhav, terming it “typical bias” on the part of the broadcaster. “Shameful how BBC censored and chopped off Asad’s mention of Indian spymaster Jhadav! Typical bias of BBC!” she wrote on Twitter.

After her tweet prominent columnist Mr. Mosharraf Zaidi wondered if the Indian government had influenced the BBC’s decision to delete Jadhav’s mention.

You or the @BBCWorld would never be intimidated by India’s intelligence agencies!

The explanation, BBC came up with was very unconvincing. In a Twitter post, BBC stated,” The reason Kulbhushan Jadhav’s name was deleted from the TV version of the HARDtalk interview with Asad Umar has a simple technical explanation. The recorded interview was too long for our broadcast slot and so had to be edited.”

The reason Kulbhushan Jadhav’s name was deleted from the TV version of the HARDtalk interview with Asad Umar has a simple technical explanation.
The recorded interview was too long for our broadcast slot and so had to be edited. This was done separately for radio and TV. 1/2

The channel said it would restore the omitted part and program would be on air again.

His name was omitted from the TV version. This was not an act of censorship, but clearly confusion has been caused, so we are happy to restore that short section to the TV broadcast and we’ll give the new programme an extra airing tonight as well as tomorrow morning. 2/2 https://t.co/STjcCKsWGt— BBC HARDtalk (@BBCHARDtalk) December 13, 2018

It is also important to discuss here that for Pakistani analysts this was not just a technical error. The BBC allegedly deleted the part which was highly important for the PTI’s government which always stood up against the Indian sponsored terrorism in Pakistan. But after the minister in Pakistan took the matter to the twitter the BBC had to come up with some believable justification in order to maintain its credibility and convince its viewers. For Pakistani analysts, the BBC has been badly exposed that how it is politically motivated when it comes to censorship.

Read more: What are Pakistan’s options in ICJ on the Kulbhushan Case

Interestingly, if words of BBC that ‘the part had to be omitted as it was too long an interview” are considered true, the length of the segment mentioning Kulbhushan Yadav was hardly 40 seconds while importance and impact were huge. How come such important mention was cut off, as it is expected of a channel like BBC that they do understand the value of such comments and they could edit out other parts to adjust the duration.

The arrest of Kulbhushan Yadav is highly consequential as Pakistan has always maintained that India has been involved in inflaming the insurgency in Pakistan.

Mr. Yadav has confessed to his crimes and said “my name is Commander Kulbhushan Yadav and I am the serving officer of Indian Navy. I am from the cadre of the engineering department of Indian Navy and my cover name was Hussein Mubarak Patel, which I had taken for doing some intelligence gathering for Indian agencies.”

“I realize during this process that RAW is involved in some activities related to the Baloch liberation movement within Pakistan and the region around it”, he clarified.

He has also highlighted his background and the activities he did as a spy. “I commenced intelligence operation in 2003 and established a small business in Chabahar in Iran as I was able to achieve undetected existence and visits to Karachi in 2003 and 2004 and having done some basic assignments within India for RAW”, he added.

While admitting his role in terror-related activities in Pakistan he said; “My purpose was to hold meetings with Baloch insurgents and carry out activities with their collaboration. These activities have been of criminal nature, leading to the killing of or maiming of Pakistani citizens.”

Read more: Kulbhushan pops up as India-Pakistan spar at the UN

He has explicitly narrated that Indian intelligence agency Research and Analysis Wing (RAW) is involved in the separatist movement in Pakistan. “I realize during this process that RAW is involved in some activities related to the Baloch liberation movement within Pakistan and the region around it”, he clarified. It is worth mentioning here Mr. Yadav was sentenced to death in 2017 by a Pakistani military tribunal for his involvement in espionage.

Did Soleimani’s death sped up destructuring of Middle East?