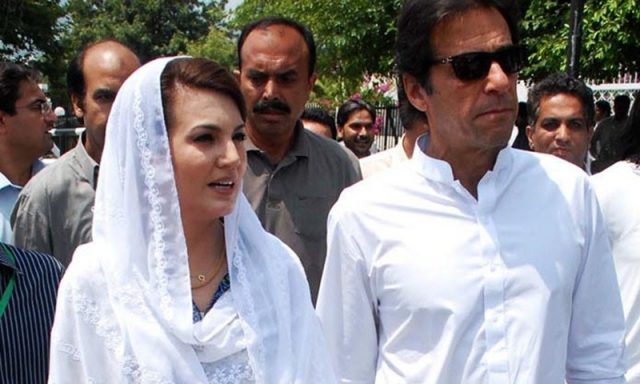 Reham Khan, the second divorced wife of Imran Khan; Chairman Pakistan Tehreek-e-Insaf, has divulged the secrets of Imran Khan’s interaction with his pet dogs, in her upcoming biopic, a few excerpts of which were carried by a leading Indian digital publication on Thursday.

Reham, who was a program anchor before she got hitched to the cricketer-turned-politician, has revealed Imran Khan’s love for his couple of dogs named Sheru, Pidu and motu, citing two of the incidents, indirectly blowing the lid off Imran Khan’s reckless behavior.

The political observers have been casting aspirations about the political role, Reham could play through the platform of Pakistan Muslim League Nawaz

In the first incident, Imran Khan ran over a dog, which he did not like, with Reham saying that the core reason was the reckless driving of the athlete.The second incident relates to the death of a dog, which Imran forgot, as he was on trekking.Though the excerpts are written in a manner to reveal the days Reham spent in Banigala, however, there seems a bid to discredit the PTI supremo as well, months before the next general elections are scheduled.

Reham Khan has also mentioned Imran Khan’s most favorite PTI candidate, the ‘very passionate Zartaj Gul’, hinting that the media personality indirectly took a jibe at the former skipper, for having a friendly interaction with women, though Reham did not state it directly.

Imran and Reham Khan parted ways just months after the secretive wedding, however, Reham had been spilling the beans against Imran Khan over his handling of affairs.

In the first interview after the separation, Reham expressed that she was a victim of a witch hunt in Pakistan, hinting that she was ‘used’.Although Imran Khan has never kept mum against his critics, his response to Reham Khan has been widely hailed in Pakistan.

Contrarily, Reham Khan, who traces her origin to Pakistan, has been divulging incidents of the past sporadically.

Soon after the separation, Reham Khan was alleged to have links with ruling Pakistan Muslim League Nawaz, an arch-rival of Pakistan Tehreek-e-Insaf, however, with each passing day, it is becoming visible that Reham’s outburst might not be the outcome of any political affiliation, but the traditional misandry.
Read more: Is Reham Khan dancing to PML-N’s tune?

Imran Khan’s first wife, Jemima Khan, remained in a relationship for many years, and would definitely have more secrets to share about the flamboyant politician, however, she did not open up about the days, she spent with Khan.Contrarily, Reham Khan, who traces her origin to Pakistan, has been divulging incidents of the past sporadically.

To dent the reputation of Imran Khan or share her side of the story regarding the surprise marriage, Reham Khan has also written a book, which she plans to launch soon; however, Imran Khan seems unfazed about the book and has even claimed that the development would boost his political influence.

Reham Khan’s book had also caused a stir, a few days back because Mubeen Rashid, a London-based journalist had also revealed few audio tapes of Reham Khan, alleging that the lady sought to write one-sided book.

The staunch supporters of Pakistan Tehreek-e-Insaf have been alleging that the ruling Pakistan Muslim League Nawaz was using Reham Khan to their advantage, claiming that Sharif’s were used to such tactics.

Jemima Khan, remained in a relationship for many years, and would definitely have more secrets to share about the flamboyant politician, however, she did not open up about the days, she spent with Khan

A few pictures of Reham Khan also surfaced on the social media, showing her inspecting the Metro Bus Project site alongside Haneef Abbasi, she has been lavishing praise on Shehbaz Sharif, the Chief Minister, Punjab; firing a broadside at the PTI leadership, however, her tirade of extra-personal nature is bolstering the perception that there is more to personal vendetta in the episode than the political angle.
Read more: Twitter reacts to Reham Khan’s innuendoes

Although Reham Khan has been trying to garner support using the ‘feminist’ card after her marriage fiasco, even then, the move is backfiring.In an interview to a foreign media outlet, Reham had declared that her former husband Imran Khan would have been a premier long time ago, had life been fair for him, however, her stance has altogether changed after the divorce.

Besides Khan, Reham has been critical of the role of Jahangir Tareen, former secretary general of the party and had fired a loaded tweet after the lawmaker was disqualified.

A prediction I made over 2 years ago.
Allah works in mysterious ways.#Mujhaysubhaiyaad— Reham Khan (@RehamKhan1) December 15, 2017

Her dubious remarks after the divorce and Imran Khan’s consistent silence is unusual in nature because in the Pakistani context, it’s the man who vilifies his ex-wife.The social media buffs also draw a comparison between Reham and Jemima Khan, declaring the latter, morally superior.

The political observers have been casting aspirations about the political role, Reham could play through the platform of Pakistan Muslim League Nawaz, however, her outdated ‘bombshell’ revelations bolster the perception that the former television anchor was displaying misandry, not at the behest of PML-N.

Will stabilising Afghanistan promise regional influence to both Russia and China?