The six CTD officials, accused for the murder of four people in the Sahiwal encounter case, have been acquitted by a special bench of the anti-terrorism court. 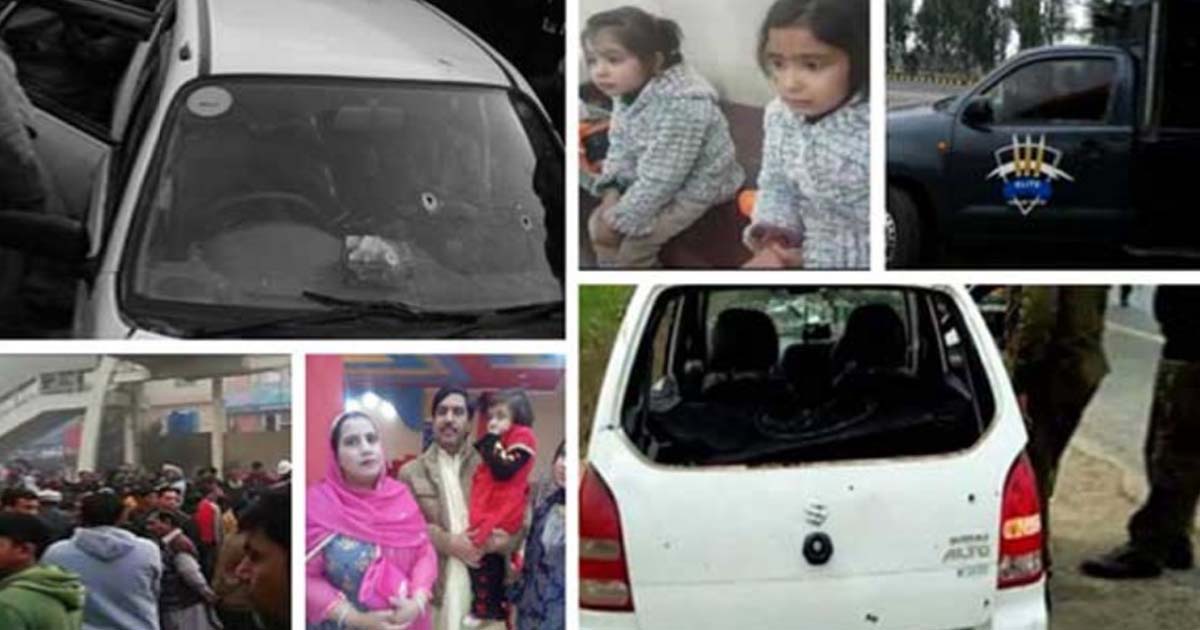 Six officials of the Punjab Police’s Counter-Terrorism Department (CTD), who were accused for the barbaric murder of four people, including a minor and a woman, were exonerated by a special bench of the anti-terrorism court (ATC) on Thursday.

Reports reveal that Judge Arshad Hussain Bhutta allowed the CTD officials the benefit of doubt. Statements of 49 witnesses were recorded, including the brother of one of the victims, and then, the special bench delivered its verdict.

The accused CTD Officials, Safdar Hussain, Saifullah, Nasir and Hasnain Nawaz, Ahsan Khan and Ramzan, had shot a couple, Nabeela and Khalil, their daughter Areeba, and another man traveling with them, named Zeeshan. The incident occurred on January 19.

Khalil and his wife, along with their four children and Zeeshan, were travelling on GT Road when the CTD officials stopped their vehicle near the Sahiwal Toll Plaza. After the encounter, the CTD personnel claimed that they were targeted as suspected Da’ish terrorists.

The injured witnesses, children of the dead couple who were travelling alongside the victims when the CTD personnel targeted them, were unable to identify the suspects. The suspects were also not identified during the photogrammetric tests conducted during the investigation.

The court stated that the CTD official who was responsible for providing weapons to the suspects maintained that they returned all the weapons and bullets. The three minor children of the couple, namely Muniba, Umair, and Jaziba, were the only survivors of the shooting.

Initially, the accused CTD officials had said that the four victims had died due to the shots “fired by their own accomplices”. They maintained that the operation was conducted as a follow-up of a raid conducted previously as they were tracking two suspected terrorists belonging to Da’ish, namely Abdur Rehman and Shahid Jabbar, who were recorded in the “Red Book”.

The CTD maintained that the shooting was an encounter, however, the family of the victims persist that they were headed towards a wedding. The claims made by the victims’ family proved to be true, as it eventuated that all the victims in the car, aside from Zeeshan, were innocent.

A joint investigation team was established to launch an inquiry into the shooting, and its findings revealed that the family of Khalil was innocent, holding the CTD officials responsible for their deaths. In the aftermath of the shooting, the Punjab government ordered the removal of multiple top CTD officials, while many others were suspended. It was announced that the six CTD officials responsible for the murders will be tried in an anti-terrorism court on charges of murder and terrorism.

It is pertinent to note that the victims’ family has repeatedly accused the CTD for pressuring them to drop the charges. Addressing a press conference, the lawyer hired by the family, Shahbaz Bukhari played a seven-minute call recording wherein an official of the CTD threatened to kill him.

In the light of the fears expressed by the victims’ family over the joint investigation team’s findings, the Lahore High Court gave the orders for a judicial inquiry. The judicial inquiry, led by civil judge/judicial magistrate Shakeel Goraya logged the statement of 49 individuals, including the suspected CTD officials, eyewitnesses and others.

The nation is outraged at the Anti-Terrorism Court’s verdict, which has acquitted the six suspected CTD officials, despite the fact that the JIT’s finding revealed that Khalil’s family was innocent.

@ImranKhanPTI While a National Thief gets VVIP treatment after plundering the nation for decades, innocents don't even get justice for getting massacred! Not only is this despicable and condemnable, (1/3) https://t.co/qNyderHdm5

Opinion makers, analysts and people have taken to twitter to record their anger and frustration at the judgment, recording their frustration at the legal system that has denied justice to the three minor children who were forced to watch the deaths of their own parents.

Amnesty International’s South Asian wing also expressed its disappointment at the lack of accountability. A post shared from their twitter account stated, “Sad, but not surprising. No accountability is almost all but guaranteeing that extrajudicial executions will continue to take place in Pakistan.”

Sad, but not surprising. No accountability is almost all but guaranteeing that extrajudicial executions will continue to take place in Pakistan. #Sahiwal https://t.co/GuAbmhPRsY

Barrister Asad Rahim Khan also highlighted the contradictions in the versions of the alleged encounter shared by the CTD officials. Khan said, “Utter failure on all levels. CTD officials – whose own versions were entirely contradictory – were involved in a massive coverup, the children were pressured, and the counsel was threatened. PTI law minister Raja Basharat called it ‘collateral damage’.”

Why the low tax-intake in Pakistan is not a hot issue?