Bilawal in KP while Imran targets PPP heartland in Sindh. 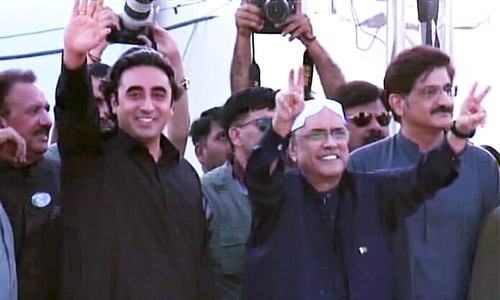 The seat fell vacant on 28th of August when the incumbent PTI MNA Gulzar Khan passed away.

The rally took place in the town of Badabher, famous for the air base used by the Americans to launch reconnaissance missions into USSR territory during the Cold War.

The NA-4 by-election is a critical popularity test for PTI’s incumbent government in Khyber Pakhtunkhwa and is expected to provide important insights into how the party performs in the upcoming 2018 general elections.

PPP is fielding Asad Gulzar, son of Gulzar Khan, who is being seen as the favorite for his late father’s seat. The late Gulzar Khan was said to have developed differences with the PTI leadership however, he did not leave the party.

PTI has given the ticket to Arbab Amir Ayub who joined PTI in May. He was previously a member of Awami National Party (ANP) and came in fourth place in NA-4, securing 11.4 percent of the total vote, during the 2013 general elections.

It has previously been reported that despite launching the EVM initiative, the ECP will not be able to use this new technology in the upcoming 2018 general elections because the required funds have not been released by the government.

While Bilawal tries to make inroads in KPK, Imran Khan is traveling to the historic city of Sehwan Sharif (home to the shrine of Lal Shahbaz Qalandar, recently the target of a terrorist attack). Sehwan Sharif is approximately 100 miles northeast of Hyderabad and is considered as PPP’s heartland.

Recent days have seen the struggle between PTI and PPP escalate as both try to wrest away political strongholds of the other.

Through his media talks and video messages, Imran has been pointing out that the PPP government has failed the people of Sindh. He has repeatedly labeled the PPP government as being responsible for the lack of reforms and poor law and order situation in Sindh.

PTI leader Shah Mehmood Qureshi who has been touring the area said while addressing a rally in Umarkot, that PTI will eject PPP from Sindh just like they have done in KPK and Punjab and will liberate the people of Sindh.

Recent days have seen the struggle between PTI and PPP escalate as both try to wrest away political strongholds of the other. In the past few weeks, Asif Ali Zardari has frequently been holding rallies in KPK in an attempt to win back some of the political capital lost in 2013.

After the heated campaign of NA-120, where the PPP candidate secured only a paltry 1,400 votes, it has become clear that PPP has lost its foothold in Punjab. This may be the reason why the seasoned PPP leadership has adopted a laser focus on KPK where they may have some space to maneuver.

Huawei says US has ‘no evidence’ of 5G spying allegations

Red meat has no confirmed link to cancer and heart disease