Indian legislature, Subramanian Swamy from BJP, extends citizenship to Pervez Musharraf under CAB that is already being contested heavily in India. On the other hand, even Pakistan is fired up with the death penalty for Pervez Musharraf. But Swamy did not resist from taking a dig at former COAS and Pakistan’s justice system. 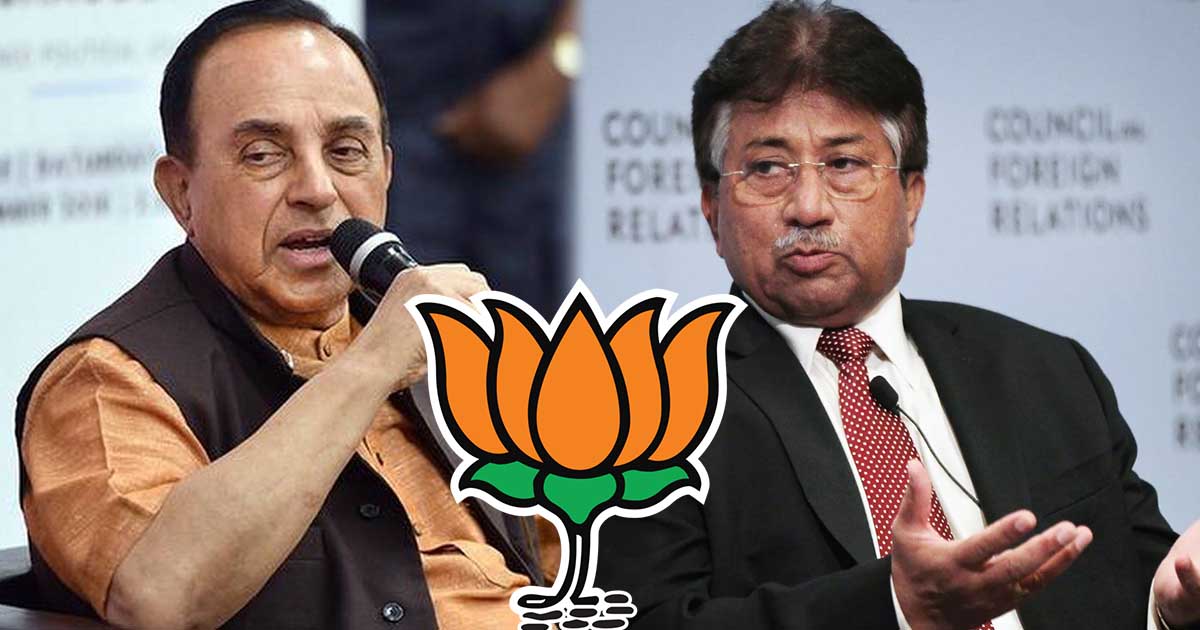 Indian BJP lawmaker, Subramanian Swamy, made a mockery of Pakistan and former General Pervez Musharraf in his latest tweet. His tweet came in the background of the Pakistan Supreme Court’s verdict in high treason case and the widespread protests against the Citizen Amendment Bill across India.

A day after the verdict on 18th December, Swamy extended the offer of Indian citizenship to Pervez Musharraf.

We can give Musharraf fast track citizenship since he is from Daryaganj and suffering persecution. All self—acknowledged descendants of Hindus are qualified in a new CAA to come— Subramanian Swamy (@Swamy39) December 19, 2019

: Syed Shahabuddin was also Syed but he always said his ancestors were Hindus. So too Farooq Abdullah. Only DNA test can tell for sure.— Subramanian Swamy (@Swamy39) December 19, 2019

Swamy, jeering at former army chief Musharraf, asserted that India will give fast-track citizenship to him under controversial CAB since he is born in India’s city Daryanganj and is being persecuted in Pakistan currently.

As of now, the Citizen Amendment Bill pitched by Indian Home Minister earlier this month has caused hue and cry across India. It amends the Citizenship Act of 1995. The BJP government attempts to maneuver the definition of illegal immigrants in CAB.

In the new set of amendments, arrangements have been made to provide citizenship to six fleeing non-Muslim minorities of Sikhs, Jains, Parsis, Christians, Buddhists, and Hindus from the Muslim-majority countries such of Pakistan, Bangladesh, and Afghanistan.

The new amendment allows illegal immigrants from these religious minorities to stay in India even without legal documents. Earlier, the Citizenship Bill 1995, denied Indian citizenship to any migrant without valid documents irrespective of the religion.

The bill also proposed to relax the 11-year requirement of living in India to at least 6 years for the above-mentioned migrants under the citizenship naturalization clause.

Invites him to debate and its 5 star media conclaves

Pervez Musharraf is a war criminal and must be shot dead for his crimes against humanity https://t.co/Raw0aJFWIB

On the other hand, former General Pervez Musharraf has been awarded a death penalty in the high treason case by a “Special Court” in short decision released on December 17th. Court then released a detailed judgment of 167 pages on 19th November – which has opened a Pandora’s box in Pakistani politics.

The verdict on this judgment was split 2-1, with Justice Shahid Karim of the Lahore High Court agreeing with Justice Waqar Ahmad Seth and Justice Nazar Akbar of the Sindh High Court dissenting. Waqqar Ahmed Seth, who is also currently Chief Justice of Peshawar High Court (elevated to bench in 2011, while Iftikhar Chaudhary was Chief Justice of Pakistan) has written in para: 66, that Musharraf if dies before hanging “should be dragged and hanged from D-Chowk for three days”

It is probably in this context that, Swamy applied the Citizenship Amendment Bill on General Pervez Musharraf, whose family migrated from India, during Indo-Pak partition. CAB is to help those Hindus who face persecution in neighbouring countries.

However, a Twitter user argued that General Pervez Musharraf is a Muslim and belongs to Syed clan, an Arab descendant for 1400 years. Swamy repudiated the claims of Twitter user and asserted that “Syed Shahabuddin was also Syed but he always said his ancestors were Hindus. So too Farooq Abdullah. An only DNA test can tell for sure.”

General (Retd) Pervez Musharraf has served Pakistan for more than 40 years, he has fought wars to defend the country and he can never be a traitor.Many time he snapped the indian media as well as #Traitor_NawazSharif#Musharraf#DGISPR#PakistanArmy#JusticeForGenMusharraf pic.twitter.com/l4yOPkRIX9

His direct dissension came due to India’s spite against former General Pervez Musharraf due to Kargil War 1999.

Moreover, even during his tenure and until now, Pervez Musharraf has appeared on Indian channels countless times. He dissed the BJP’s government for thrust India towards religious extremism and fuelling tensions on LOC with Pakistan.

He has courageously defended disparaging comments of Indian anchorpersons against the Pakistan Army. He has sharply contested hostile questions from Indian media regarding Hafiz Saeed, where in return, he reminded them of India’s brutalities and violation of UN resolutions in Kashmir. Several videos of Pervez Musharraf sharply dissenting with Indian media flourished on Twitter in his defense.

While he has been in altercation several times with Indian journalists, many of them have visited to meet him at his Dubai residence. Musharraf’s treason case has been widely covered in Indian media which implies that he is still relevant for them. It has been closely following the case and discusses the future moves by former President General Pervez Musharraf against his death penalty.

Kashmir, the bone of contention: Is there any solution to Indo-Pak border disputes?