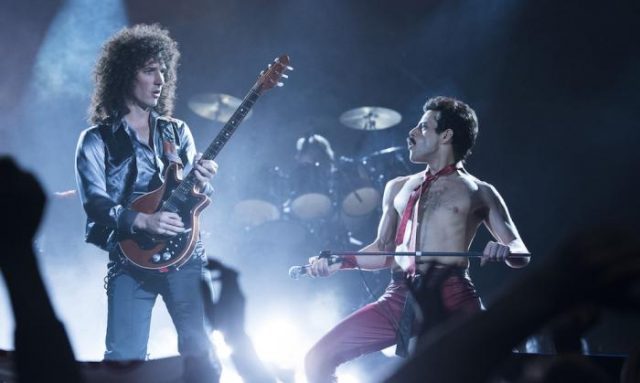 It’s frankly been amazing to see the torrent of love Bryan Singer’s Bohemian Rhapsody has received from the Award bodies and people in general. While it’s no surprise that there are Queen and Freddie Mercury fans out there, it is surprising that they were willing to overlook so, so many problems in this film.

In a way, the film is comparable to a superhero film; how the brand name alone got people to fill cinema halls. Because despite Rami Malek’s magnetic performance there is absolutely little else to find enjoyable about this distasteful biopic.

While Malek manages to capture the essence of Mercury and wow us in every scene, there isn’t a single another supporting cast member who holds their own. Lucy Boynton’s Mary comes close, but she isn’t given much material to work within the first place. The musical numbers in this film are also livened up by Malek who struts around the stage with Mercury’s signature commanding presence leading to some truly standout moments.

But aside from that, Bohemian Rhapsody is a study in what constitutes as a bad biographical film. It’s a fact universally known that a person’s perception of the world and the things he does are biased from their own point of view and so, when making a true to life documentary or feature film directors and writers are careful to explore more than just one school of thought on each and every issue when trying to give a fair and honest narrative. That core element of truth is missing from Bohemian Rhapsody because of the amount of creative powers bestowed on Brian May and the other members of Queen.

The result is a film with an almost unabashedly skewed version of events that detail Mercury’s trajectory from a baggage handler at an airport to the lead singer of the biggest band in the world. Riddled with inconsistencies and shaped by Bryan Singer who left the project halfway through filming, Bohemian Rhapsody is easily one of the worst films to come out in 2018.

There have been numerous biographical films that have verged on being entirely fictional, but the good amongst them at least managed to be entertaining. Bohemian Rhapsody isn’t entertaining but what’s shocking, especially in the wake of its many award nominations (the film is nominated for five Academy Awards) and wins (including the Best Drama win at the Golden Globes) is what an incompetent movie it is. With Suicide Squad level bad editing, a storyline that is clichéd and a script doesn’t give room for any other person to have a character let alone be multidimensional, Bohemian Rhapsody’s hackneyed approach to sexuality and race also leaves a bad taste in your mouth.

It isn’t enough that the film shows us that Mercury is ashamed of his Indian heritage, the film wants us to know how hard he works on changing his identity but doesn’t deem it important to provide a nuanced narrative of why someone in that time period would prefer being white over brown.

Ultimately it feels like there is no soul in Bohemian Rhapsody and Malek, as brilliant as he is, can only do so much to keep this sinking ship afloat.

Mohammad Amir and wife Narjis blessed with a baby girl

Books as decoration: How have we made hypocrites out of ourselves!