Book Review: Churchill and the Islamic World By Warren Dockter 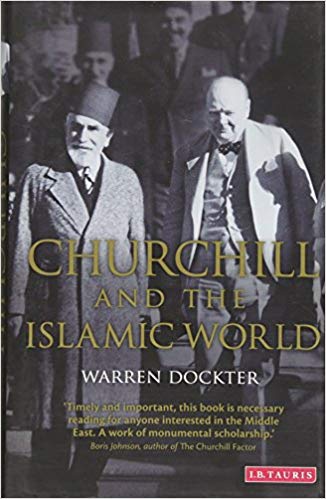 Much has been written and discussed about Winston Churchill, undoubtedly one the greatest statesmen of the 20th century. The effects of his policies and the decisions he made during his tenure as Prime Minister of Britain can still be recognized in global politics today. Churchill led Britain to victory in the Second World War against Nazi Germany. He was not only a politician and a statesman, but a soldier and a writer as well. He is celebrated as one of the greatest leaders in British history but in recent times, his legacy has become more controversial.

He has been derided as an Islamophobe and a racist. Dr. Shashi Tharoor seems to believe his legacy is as bloody and murderous as the likes of Hitler or Stalin. One of the most controversial aspects of Churchill’s life is his attitude towards the Islamic World. Winston Churchill’s relationship with the Muslim world is highly controversial. A far-right politician in the United Kingdom was arrested after making an Islamophobic speech in which Churchill was quoted.

A rather infamous quote of Churchill goes as follows, “How dreadful are the curses which Mohammedanism lays on its votaries!” In the same quote, he goes on to say, “The fact that in Mohammedan law every woman must belong to some man as his absolute property – either as a child, a wife, or a concubine – must delay the final extinction of slavery until the faith of Islam has ceased to be a great power among men.”

The book is a product of meticulous research and yet it’s easy to read. The author delves into a very controversial topic and takes a nuanced approach in explaining away all the controversy.

However, Churchill is also known for his love and admiration of Islam and “Muhammadans” i.e. Muslims. The Aga Khan once expressed the desire that Churchill ought to have been Viceroy of India. In many of Churchill’s letters and speeches before Parliament, he refers to the British Empire as the “greatest Muhammadan power” in the world, in that the Empire had the greatest number of Muslim subjects, rivaling that of the contemporary Ottoman Empire.

He is also well known for his admiration for the bravery of Britain’s Muslim subjects. And some family members of Winston Churchill apparently begged him not to convert to Islam. So which one is it? Was the former British Prime Minister a rabid Islamophobe? Or did he harbor a secret love for Islam and ‘the Orient’? That is the question this well-researched book by Warren Dockter tries to answer.

The book is divided into eight chapters that traverse the course of Churchill’s life and rely on personal correspondences by the Churchill himself to find out what he really felt about the Islamic world. The earlier chapters focus on his life as a colonial policeman in North Africa, his tenure in the Colonial Office before World War 1 and as Minister of War and Air during the Great War. The later chapters focus on his preoccupation with defending Britain against the Nazis and managing the hasty transfer of power to newly independent states like Pakistan and India which were former British Colonies.

Literally hundreds of references and links to other great works of scholarship by various historians given in the bibliography support the arguments put forward by the author. What are the author’s arguments and conclusions? At the risk of spoiling the book, like many things in life, Churchill’s attitude towards Islam depends on the context. While moving from chapter to chapter, one comes to realize that his views towards Islam evolved as he aged. And the page turners in the book were, in fact, quotes from letters and books by Winston Churchill himself.

Winston Churchill’s relationship with the Muslim world is highly controversial. A far-right politician in the United Kingdom was arrested after making an Islamophobic speech in which Churchill was quoted.

Few would doubt his capabilities as a statesmen and a leader. He is known as the man who led the United Kingdom to victory against the Nazi Juggernaut in World War 2, a hero who stepped up to the occasion when he was needed most. But he was an excellent writer as well. Much of his writing is witty and thought-provoking. For instance, Churchill once said, “You have enemies? Good. That means you’ve stood up for something, sometime in your life.” On another occasion, he remarked that appeasement is akin to feeding a crocodile in the hope that it will eat you last.

After reading Churchill and the Islamic World, I made up my mind that I absolutely have to read works by Winston Churchill as well. He once said, “History will be kind to me for I intend to write it.” But history has not entirely been kind to him. There are many who would claim that, keeping his statesmanship abilities aside, Churchill was an imperialist and a callous racist. And perhaps he was. His many letters show how Churchill’s worldview was shaped by the Victorian Age and his love for the British Empire. All other considerations were probably secondary to his prime concern for the preservation of Empire.

Read more: Defeat is an Orphan: How Pakistan Lost the Great South…

Churchill is blamed for the deaths of at least a million Bengalis during a famine in India. He mocked Gandhi as a ‘half-naked man’ and once said that Indians are a ‘beastly people with a beastly religion’. But, as Warren Dockter’s book shows, Churchill may actually have been progressive, relative to the time and other prominent leaders in the British politics. No discussion of Winston Churchill’s relationship with the Islamic world would be complete without mentioning his role in the creation of Pakistan. According to British historian Alex von Tunzelman, if the Quaid-e-Azam is the father of the nation, Churchill qualifies as the uncle of Pakistan.

When Churchill refers to Indians having a ‘beastly religion’, he is, in fact, talking about Hindiusm. On the other hand, he seems to have strived earnestly to secure the rights of Indian Muslims as a minority and facilitate in the creation of a separate Muslim homeland in the subcontinent. Muhammad Ali Jinnah and Winston Churchill seemed to have had close correspondence with each other both during and after the Second World War. Why and how Churchill did this is explained at length in Warren Dockter’s Churchill and the Islamic World, again relying on his letters and his speeches before the British Parliament where he put his case for the creation of Pakistan.

The later chapters focus on his preoccupation with defending Britain against the Nazis and managing the hasty transfer of power to newly independent states like Pakistan and India which were former British Colonies.

The book also sheds light on the role Winston Churchill played in the creation of the modern middle-east, the kind of relationship he wanted to build with the Ottoman Empire and the peculiar reasons for his support of Zionism. Here, once again, the author introduces the reader to conflicting tendencies in Churchill’s own mind. For instance, Churchill wanted strong ties between Britain and the Ottoman Empire before World War 1. However, once the war broke out and he failed to achieve this aim, he changed his priorities entirely. Through his correspondence with his mother, friends and colleagues, Warren Dockter guides us through Churchill’s thought process and the logic behind his decisions.

The book is a product of meticulous research and yet it’s easy to read. The author delves into a very controversial topic and takes a nuanced approach in explaining away all the controversy. He concludes each chapter with a summary of Churchill’s quotes and views and leaves the reader to decide for himself. Was Winston Churchill a hate-filled Islamophobic bigot? Or is it the other way around? The truth is simpler than one might expect.

US strengthening India to limit Chinese growing hegemony in region