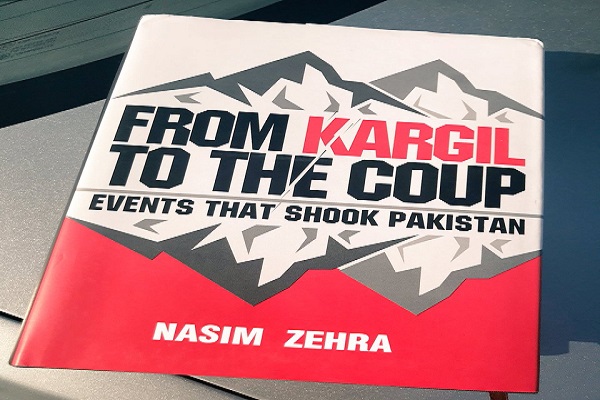 It is said that those who do not learn from history are bound to repeat it. But to learn from history, one must cut through all the confusion, misrepresentations, intrigue and conspiracy theories that often cloud historical facts. How does one learn from past events when different people who were part of the drama write different versions of the same events? One such period in Pakistan’s history is that of the Kargil War and the events leading up to the military coup soon after it.

A lot has been written about the Kargil ‘episode’ but various truths and untruths are mixed up in the never-ending blame that’s part of Pakistani politics.

Who was responsible for Kargil? Was it the civilian leadership or the top military brass of the country? Is the civil-military dichotomy even useful to understanding the events that changed the course of the country’s history during the Kargil conflict? Nasim Zahra answers these questions in his well-researched book, which was expected to be released for a number of years.

It was announced that a book by the author was coming up at least a couple of years before its release. Indeed, many years-more than a decade, to be fair, have gone into the research for this book. Nasim Zahra cuts through the confusion surrounding the Kargil war and how it led to the coup. It was well worth the wait.

The book relies on memoirs by those involved in the events, newspaper articles of the day, written exchanges and interviews with top government officials in Pakistan, the US and India who were there to witness first-hand how events unfolded.

Rarely does the author herself point fingers or blames any decision maker for the crisis the country went through. Instead, she quotes people who were responsible for back-channel diplomacy between India and Pakistan at the height of the crisis and those that were present in closed-door secretive meetings where all decisions were made. The reader can then decide for himself or herself as to who was responsible for what in the Kargil crisis and to what extent.

The author presents all aspects of the Kargil ‘episode.’ She covers the tactical and operational aspects as well as the strategic aspects.

She explains, with the help of maps, how harsh the terrain really was where Pakistani and Indian troops fought. These maps also aid in understanding the movement and position of the troops, which positions, if held were tactically advantageous and where the important supply lines were.

At the same time, she brings the reader back to the political scenario where the battle the troops were fighting had real time diplomatic and strategic consequences for their countries. Opposition camps in both India and Pakistan banked on the Kargil crisis to pressurize the sitting government.

Read more: A journey back into Pakistan’s convoluted history

She goes on to quote various Indian and Pakistani army officers involved in the fighting which gives life to the author’s account of how tough it really was to survive up there. After going through the political ramifications of the Kargil war, the author then focuses on the battlefield again. This continues throughout the book. The reader is thus able to relive the crisis as it occurred on the world stage and as the fighting went on in the battlefield.

She also goes through some military terminologies and abbreviations before mentioning which division and brigades from Pakistan actually went up to the highest and toughest battlefield.

It is useful to get familiarized with these terms the first time they are used because they will come up often during the book.

The first chapter of the book begins with some history of Pakistan. This is useful because it provides some context to analyze why something like the Kargil war does not seem altogether surprising, given the relations between the two neighbors. The book then goes on to explain when the plan was actually drawn up, ignored and finally reconsidered – all of which took more than a decade. The author then focuses on the domestic situation in Pakistan. Gradually, the book opens up to global politics and international players, Washington and Beijing in particular. Finally, the author closes in on the domestic situation again and how the crisis was handled or mishandled, depending on your take of what seems to have happened. As the writer aptly puts it, in times of crisis, the civil-military divide in Pakistan got ‘crystallized.’

Read more : South Asia must heed the lessons from history!

The final chapter poses and then answers some key questions surrounding the conflict. Was the then Prime Minister Nawaz Sharif informed about the Kargil operation? Did the 4th July meeting between Nawaz Sharif and Bill Clinton take place at a time when the Pakistan military was on a winning curve – a meeting that led to the announcement of the withdrawal of Pakistani troops? Was there nuclear blackmail, during the conflict, by Pakistan? Was it necessary for the Prime Minister to dash to Washington for a hurriedly planned meeting? And finally, was the coup inevitable?

These enduring questions are answered comprehensively by Nasim Zahra’s well-researched and much-needed book. There have been various memoirs and books by individuals who were part of the drama that was the Kargil war but none gives as wholesome, unbiased and complete a picture of what truly happened as “From Kargil to the Coup: Events that shook Pakistan.”