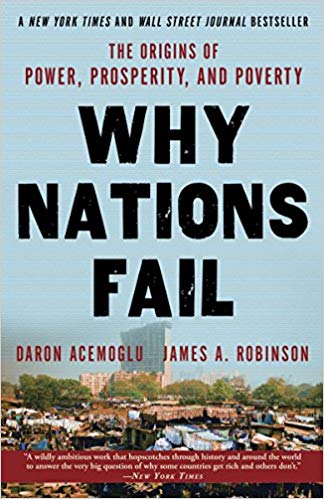 Throughout the past few centuries, there have been various attempts at explaining why some countries are poor and others are rich. Some of these theories focussed on race and ethnicity while others explained away the poverty of impoverished countries in terms of geography. Why are Africans poor but not white Europeans? 19th and some early 20th century sociologists would argue it’s because whites had higher average IQ.

Similarly, the answer to the question ‘Why is North America rich but not South America?’ is given by many as follows: North America is more temperate which allows for more crops to be grown. That reduces the chances of famine and consequent political instability. Why is Japan richer than all other Asian countries is also because of either of the two theories just mentioned or some combination of these factors.

The authors present examples from across the globe to show how little geography has to do with prosperity.

The strength of any theory lies in the how simple an explanation it provides, how falsifiable it is and how it can be used to make predictions. That being said, theories based on race or geography have been falsified to a large extent and are not useful in making predictions. What is interesting about these ideas is that they all attribute poverty and prosperity to factors beyond human control.

We don’t choose where we are born or our ethnicity or race. Hence, there isn’t much that can be done to transform poorer countries into more developed ones. This is where the book ‘Why Nations Fail’ was immensely satisfying. It not only systematically destroys all earlier theories which placed a great amount of importance to race or geography but it also presents a very convincing argument that eliminating poverty is not out of reach, regardless of race and ethnicity or geography.

Daron Acemoglu is a Turkish born American economist who has taught at MIT since 1993 and James A. Robinson is a British economist and political scientist. Between various TED talks and another book co-authored by them ‘The Economic Origins of Dictatorship and Democracy, the duo has pondered over these questions for quite some time. Why are some nations poor and others are rich? Can rich nations become poor and vice versa? What makes sure prosperity is sustainable?

The book traverses the length of history for the past two to three thousand years. It demonstrates it’s not race that guarantees wealth; how come white Europeans went through the dark ages if whiteness is supposed to make you wealthy? The book also shows that merely being ignorant of the right policy is not the cause behind poverty either.

The crux of their thesis is that inclusive institutions are the only way to generate and guarantee long-term prosperity.

It is entirely possible that a country’s leaders may choose policies that benefit their cohorts and supporters at the expense of the rest of the population while being fully informed of the long-term consequences of there actions. Ultimately, why nations fail is a question that cuts into the heart of what it means to be a human being.

Human behavior depends to a great extent on incentives. Research shows that increasing working hours has little to do with productivity. Performance-based incentives make sure people put in their best effort at work. Similarly, when it comes to policy at the national level, incentives tend to play a very significant role in creating wealth as well as destroying it.

Read more: Books as decoration: How have we made hypocrites out of ourselves!

Why is Africa poor? Why did the Soviet Union’s economy falter and ultimately collapse? How come China rose at such an astonishing rate in a few decades when it used to be one of the poorest countries in the world? It all comes down to, so the theory goes, to incentives which are ultimately shaped by the country’s institutions; economic as well as political. The authors present examples from across the globe to show how little geography has to do with prosperity.

South America used to be a lot richer than North America before Western colonies were established there. North and South Korea were the same as far as national and per capita, wealth is concerned before the Korean war in 1953. Now the South seems to be light years ahead of the North. How could this happen in half a century? Daron and James argue it’s because South Koreans know their property rights, intellectual and otherwise, are guaranteed by the state.

While in the North just like in Africa, citizens know their own efforts to risk innovation will bear no fruit. The states don’t provide an environment where the people can choose to participate economically in the country’s GDP the way they want and participate in the political processes that affect their political rights. In all likelihood, the governments in Africa and North Korea will confiscate private wealth.

So why bother? The book also details how failed states like Somalia emerge and why they continue to fail. Divided into 15 chapters, the book goes back and forth between different time periods in history and across different regions of the world. Each chapter presents a piece of the argument formulated after years of research by the authors. And to their credit, the writers don’t fall into the language of capitalism versus socialism. The crux of their thesis is that inclusive institutions are the only way to generate and guarantee long-term prosperity.

Was Fukuyama really wrong in his ‘End of History’ predictions?