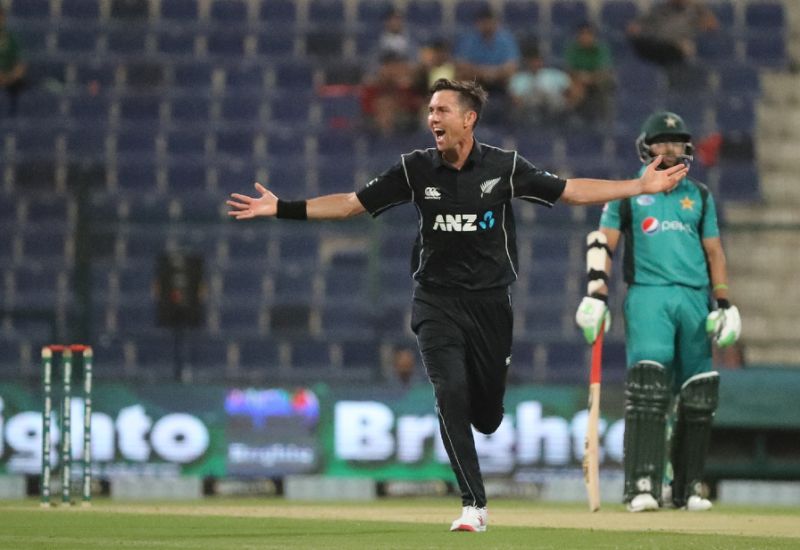 Trent Boult became the third New Zealand bowler to claim a one-day international hat-trick as his side defeated Pakistan by 47 runs in the first match in Abu Dhabi on Wednesday. Pace spearhead Boult reduced Pakistan to 8 for 3 in their chase of 267 after he dismissed Fakhar Zaman (one), Babar Azam (nought) and Mohammad Hafeez (nought) in the third over.

He finished with figures of 3 for 54 as Pakistan were bowled out for 219 in 47.2 overs. “It’s nice to be back out there and get the win for the boys,” said Boult, who missed the 3-0 loss in the preceding Twenty20 series due to the birth of his child.

Sarfraz dragged a Colin de Grandhomme delivery onto his stumps New Zealand were almost home and dry. Grandhomme took 2 for 40 while Lockie Ferguson finished with 3 for 36.

“I think the new ball is a key part of the game and we know what early wickets can do to chasing totals. “The hat-trick ball I was just trying to make him play and to slide one onto the pads is a great feeling.”

Veteran batsman Ross Taylor top-scored with 80 while wicketkeeper Tom Latham struck 68 off 64 balls to lead New Zealand to 266-9 after they won the toss and batted at Sheikh Zayed Stadium. In response Pakistan crumbled to 85-6, before Sarfraz Ahmed (64) and Imad Wasim (50) added 103 for the seventh wicket.

However, once Pakistan skipper Sarfraz dragged a Colin de Grandhomme delivery onto his stumps New Zealand were almost home and dry. Grandhomme took 2 for 40 while Lockie Ferguson finished with 3 for 36.

Boult exposed Pakistan’s batting woes early on, bowling Zaman off his pads before having Azam caught at slip and then trapping Hafeez leg-before with a sharp inswinging delivery. He joined fast bowlers Danny Morrison (v India at Napier in 1999) and Shane Bond (v Australia at Hobart in 2007) as the only New Zealanders to take an ODI hat-trick.

Imam-ul-Haq (34) and Shoaib Malik (30) added 63 for the fourth wicket but both fell in successive overs before the Sarfraz-Wasim stand briefly reignited hopes. Earlier, New Zealand recovered from 78-3 and then 210-7 to set a challenging target.

Paceman Shaheen Shah Afridi, playing only his fourth one-day international, jolted New Zealand at the start with the wickets of George Worker (one) and Colin Munro (29). Shadab Khan dismissed Kane Williamson for 27 before Taylor and Latham came together.

The pair compiled a fourth-wicket stand of 130, but a burst of three wickets from Pakistan leg-spinner Shadab in the 42nd over appeared to halt their charge. He pinned Latham leg-before and did the same to Henry Nicholls (nought) the very next ball, before removing De Grandhomme two balls later when he edged to first slip without scoring.

But tailenders Ish Sodhi (24) and Tim Southee (20) added 42 precious runs for the eighth wicket to give New Zealand a more competitive total, as Shaheen finished with 4 for 46 in his nine overs. “We caught them at 210-7 but 50 plus runs for the last three wickets hurt us badly,” said Sarfraz.

“New Zealand have good new ball bowlers and early wickets pushed us too much.” The victory gave New Zealand a 1-0 lead in the three-match series and extended their ODI winning streak against Pakistan to 12 matches dating back to December 2014. The remaining matches are in Abu Dhabi on Friday and in Dubai on Sunday.

Bushra Maneka force behind the idea of “Al-Qadir University”