Bravo ANP to contest Elections despite Bilour’s assassination; but who is behind all this?- Shiffa Yousafzai 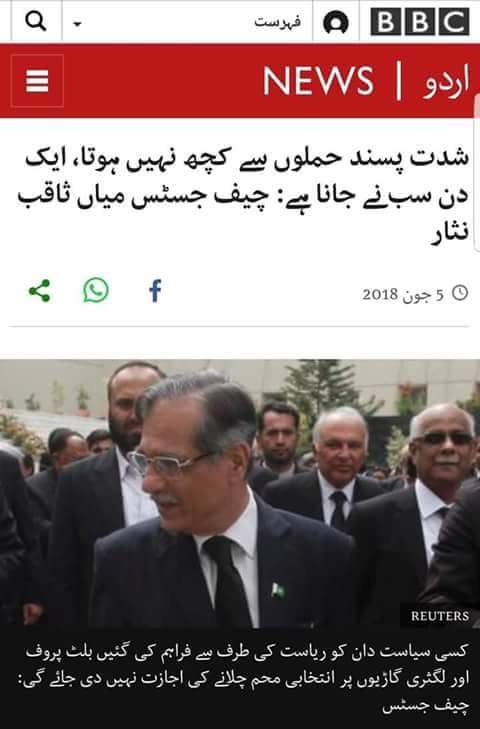 All that we feared – and many political analysts had predicted – has just started right before the General Elections, now all set for July 25. Haroon Bilour, Information Secretary of Awami National Party (ANP) was son of Bashir Bilour, the provincial minister, who also lost his life in a bomb blast in Peshawar in 2012. Bomb blast took place on circular road in University town of Peshawar – when Haroon Bilour was arriving for a corner meeting. In this tragic incident, 12 people died on the spot (death count has reached 20 till now) and 53 have been injured who were moved to Lady Reading Hospital, (LRH) Peshawar.

Right after the blast, Bomb disposal squad reached the area and confirmed that it was a suicide bomb blast and 8 to 10 kgs of explosives were used in the attack. The martyred, Haroon Bilour was walking towards the stage in the corner meeting organized for his election campaign when the bomb exploded. Haroon Bilour was to contest the approaching elections from the constituency PK-78. Now Provincial Election Commission has postponed election in this constituency under clause: 73(1) of ECP.

A very disturbing video surfaced that shows Haroon Bilour walking towards the stage, supporters chanting slogans and the bomb explosion can be heard and seen.

Haroon Bilour’s son, Danyal Bilour who was also with him in the corner meeting, is said to be safe.

Haroon Bilour was to contest the approaching elections from the constituency PK-78. A very disturbing video surfaced that shows Haroon Bilour walking towards the stage, supporters chanting slogans and the bomb explosion can be heard and seen.

ANP was savagely attacked by TTP before the 2013 general elections; it lost several of its leaders and more than 500 workers. Those attacks severely reduced party’s ability to contest elections with necessary vigor and logistics. However overall security situation has improved in KP and across the country since the beginning of National Action Plan after the brutal attack against school children at Army Public School (APS) on Dec 16, 2014. Haroon Bilour himself had expressed the confidence, few days ago in a press talk, that now party and workers will be safe.

But few days ago, National Counter Terrorism Authority raised concerns about the security situation. Journalists who went to cover election campaigns in Bannu, Lakki Marwat, Karak and other places were also asked to turn around and not go for the coverage as the security situation was not favorable. A week ago in Bannu, a candidate of Muttahida Majlis e Amal (MMA) Malik Sherien, along with 7 others lost their lives in a bomb blast.

As I mention above, this is not the first time ANP has been attacked. This was the same area where ANP’s leader (Haroon Bilour’s uncle and Bashir Bilour’s brother) Ghulam Ahmad Bilour was also attacked by a bomber while campaigning for general elections in 2013. Before that, Bashir Ahmed Bilour on 22nd December, 2012 was attacked by a suicide bomber when he was coming out of a meeting of ANP at a private residence, and that’s when he also lost his life.

In October 2008, an attempt was made to assassinate President Awami National Party, Asfandyar Wali Khan as well. A suicide attacker tried entering his Hujra where Asfandyar Wali was greeting his guests on the second day of Eid-ul-fitr.

Bomb disposal squad reached the area and confirmed that it was a suicide bomb blast and 8 to 10 kgs of explosives were used in the attack. The martyred, Haroon Bilour was walking towards the stage in the corner meeting organized for his election campaign when the bomb exploded.

Plan to produce chaos before Elections?

Pakistan had achieved peace in the past few years – since APS tragedy. Even before the attack on APS security agencies were gradually penetrating the traditional strongholds of TTP and other insurgents. After SWAT series of operations followed in the agencies of FATA, these clear and hold operations had greatly neutralized TTP’s ability to strike settled areas. Similar counter-insurgency operations across Baluchistan reduced Baluch insurgent’s ability to hit civilians, Chinese workers and key installations. Karachi operation that was started by Rangers under the directions of Supreme Court of Pakistan in the beginning of 2013 brought Karachi’s five year long urban urgency to an end within the next two years. By the end of 2016, most TTP elements and leadership had taken refuge in neighboring provinces of Eastern Afghanistan. Some of their leaders were targeted in US drone strikes – including Mullah Fazlullah the mastermind of APS attack who was killed recently. Pakistani governments, Army and media had started to claim that Pakistan is a rare success story against terrorism, militancy and insurgencies. In these few years it also became increasingly clear that hands of Indian intelligence apparatus – RAW & IB – were active behind terrorists in FATA, insurgents in Balochistan and urban violence of Karachi. Nexus between Afghan agency, NDS and Indian agencies hardly needs any elaboration.

Situation has remained calm till few months ago. After Nawaz Sharif’s disqualification in Panama Scandal, he, his daughter, Maryam and his party leaders have been warning of economic and political crises. An economic crisis has built up gradually in the past one year – though PMLN government remained in power till 31st May, and is fully responsible for its bad economic policies, non revenue earning projects, vastly increased internal and external debt, falling exports and closure  of industries across Punjab. It is thus intriguing when Nawaz and his daughter and other leaders supported by sections of media have been blaming opposition parties, establishment or judiciary for economic and political instability.

But, after Bilour’s assassination irresponsible slogans were raised against Pakistan Army and judiciary and PMLN supporters were sending messages on social media claiming that they had warned of political instability. But who is creating political instability and why? Previously supporters of PMLN claimed on media that elections will not be held, now when elections are all set to take place on July 25, who is trying to speed chaos and who stands to benefit from it? These now become million dollar questions?

Nawaz and Maryam stand convicted of corruption. And this has been an open transparent legal process continuing in steps over the past two years. It was visible to all world. But PMLN leadership in Punjab, under Shahbaz Sharif, has announced as hero’s welcome for convicted Nawaz and Maryam. What are they tying to achieve? Are they trying to create political agitation to influence or disrupt general elections? Most political analysts predict (at least till 15 days ago) that while PTI may win more than 100 seats, PMLN suffers from chaos and demoralization and may not win more than 50 seats. So could it be that Nawaz and PMLN – threatening these rallies – stand to benefit from chaos and confusion before the elections?

But some hidden hands are active too. These are trying to disrupt the smooth transition of power from one government to another. This year is going to mark the formation of third democratic government and this is going to be the start of third uninterrupted democratic term in Pakistan’s history. Pakistan needs a strong decisive government after the elections to deal head on with the economic crisis and foreign policy.

It is reported that TTP has claimed the responsibility of this attack. But, whoever is behind it, the question here is that is it a message for Pakistan from the hidden hands involved behind these attacks? Are those hidden forces trying to give a message to ANP? Is ANP the only party on their hit list? Or do all the senior leaders of all the major political parties have security concerns?

Mian Iftikhar Hussain said, “About Haroon Bilour, many started to predict that he was surely going to win the elections. Now there could be two possibilities one; that it was purely to create upheaval in Pakistan. Two; TTP is also used by other forces for ANP was seen as a threat in the elections and thus is wanted to pull out of the elections.”

This view has gained credence over the years.

Pakistan is quickly moving towards stability and prosperity. The democratic process in the country is gaining momentum and the accountability drive has strengthened the public’s trust in the system. The Supreme Court, civil society and the military establishment have time and again reiterated their stance of supporting the democratic culture in the country. However, Pakistan has reached this juncture after paying ‘butchers bill’.

Read more: Identity: A factor in making and breaking of terrorist organizations

15 years of foreign-sponsored terrorism, 70,000 lives lost and more than $100 billion economic loss has paved way for the peaceful and timely elections which are due this month. The enemy has been defeated but it has not given up. It will continue to do its utmost to foment terror and instability in the country especially when the country is in elections season. Political parties must ensure that proper security arrangements are made in public gatherings. Caretaker government should also utilize every resource to ensure massive turnout on 25th of July since it will determine our future course.

Shiffa Yousafzai is a TV presenter & producer with Hum TV. She is an International Alumni Ambassador for Manchester Metropolitan University, UK, where she studied Multimedia Journalism. Earlier, she graduated with business and marketing at Air University, Islamabad. She had been vice-president Air University Cultural Society; She is a singer and has performed in cultural events. Shiffa could be followed on twitter @Shiffa_ZY and on facebook @Shiffa Z. Yousafzai. The views expressed in this article are author’s own and do not necessarily reflect the editorial policy of Global Village Space.

The next Oscar goes to ‘Friend’s request’

Nawaz & Maryam conviction: Has NAB set the stage for a good appeal?