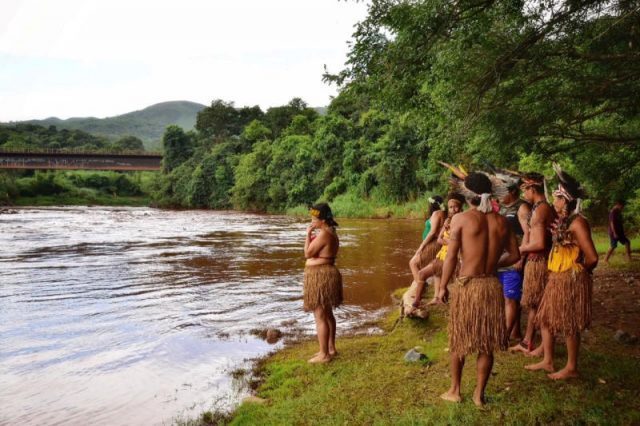 Muddy waste from a ruptured dam at a mine in Brazil’s southeast is reaching an indigenous community in the region, contaminating its water supply, a chief told AFP. “We noticed that the river is becoming dirty and later, we started to see dead fish,” a leader of the Nao Xoha native community, Hayo Pataxo Ha-ha-hae, said by telephone.

He said he had met a representative of the government’s indigenous protection agency Funai to discuss the pollution. The muddy change to the Paraopeba river was the result of the dam collapse that occurred last Friday at the mine owned by mining giant Vale, close to the town of Brumadinho.

Muddy waste from a ruptured dam at a mine in Brazil’s southeast is reaching an indigenous community in the region, contaminating its water supply.

The disaster has killed at least 60 people and left nearly 300 missing, presumed dead. More than $16 billion was wiped off Vale’s market capitalization on Monday as investors digested the news, which was compounded by a previous mining dam disaster involving Vale in the same region three years ago.

The Nao Xoha community is comprised of 27 families living on the banks of the Paraopeba river in a fishing village, Sao Joaquim de Bicas, 20 kilometers (12 miles) from Brumadinho. “They informed us yesterday (Sunday) that they have only small reserves of water,” the regional Funai director, Jorge Luiz de Paula, said in a statement.

Funai on Monday delivered donations to the Nao Xoha families.  Hayo said: “We are in a very serious situation…. We depend on the river and the river is dying. We don’t know what to do.”

Marcelo Laterman, a geographer and spokesman for Greenpeace, called the pollution “worrying.” “We are seeing this toxic mud spreading and it looks as if it will go 220 kilometers to another dam where these mining residues can be blocked,” he told AFP.

He said parts of the river and nearby vegetation “were completely destroyed.” Brazilian authorities have ordered that more than $3 billion in Vale assets be frozen with the aim of using it to pay out compensation and fines.