Brazil’s presidential candidates at a glance 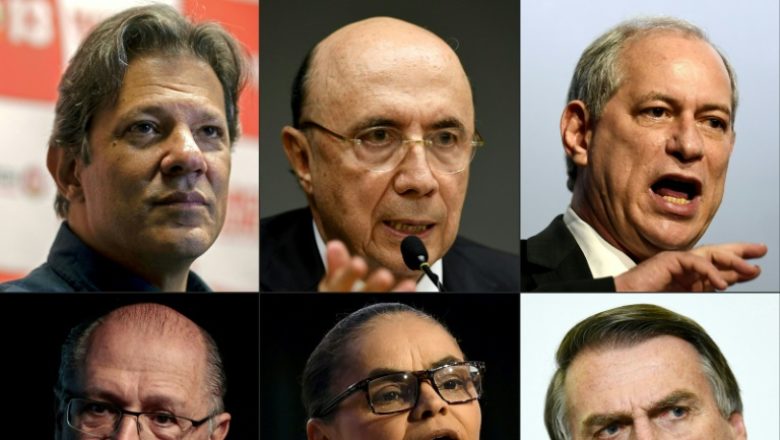 Brazil’s presidential election, starting with the first round on October 7, is seen as the most unpredictable in decades. Here’s what you need to know about the biggest names in the race.

Lula: Jailed but still ahead

A former shoeshine boy and steelworker who rose to become one of Brazil’s most popular presidents, Luiz Inacio Lula da Silva wants back in. The only problem: he’s serving a 12-year prison sentence for taking an apartment as a bribe. Lula, 72, insists that the case was trumped up to keep him out of the race. Under Brazilian law, anyone who has lost an appeal on a criminal conviction is automatically barred from running for office.

That means double unpopularity: Temer is the most hated president in Brazilian history and most Brazilians don’t like Meirelles’ attempts to impose austerity on the floundering economy

Lula, who ruled from 2003-2010, is appealing and, incredibly, he’s still far ahead in opinion polls, which would show him leading the first round and easily be winning a second-round runoff. On Saturday, the leftist Workers’ Party that he founded is due to nominate Lula as its candidate. After that, it will be up to the country’s top courts to decide whether he can be on the ballot.

Former army captain Jair Bolsonaro, 63, is often called Brazil’s Donald Trump. He not only gets away with saying the outrageous but uses the attention to bolster his claim to being an outsider against the corrupt, incompetent elite. Among his regular targets are gays, women and torture victims under the 1964-85 military dictatorship.

Despite the fresh image, boosted by enthusiastic use of social media, Bolsonaro is actually a long-serving member of Congress. The right-winger is not being probed for corruption, however. That’s a real plus in a political system where every party and much of the government are riddled with graft scandals. Polls put him in second place after Lula, though likely not winning the runoff round. He is with the Social Liberal Party, which despite its name is conservative.

She’s black, once worked as a maid and has never been charged with corruption: meet Marina Silva, one of Brazil’s least typical politicians. Silva, 60, overcame a harsh childhood in the Amazon to become a courageous environmental campaigner, before bursting into the heavily male-dominated world of national politics and serving as environment minister under Lula.

The right-winger is not being probed for corruption, however. That’s a real plus in a political system where every party and much of the government are riddled with graft scandals.

The center-leftist made two strong bids for the presidency in 2010 and 2014, so she is hardly unknown. However, she is frequently criticized for appearing to go quiet between the campaigns and bending her message to the point where many Brazilians no longer know quite what she stands for. She will run with her own Rede party starting from Saturday. Polls show her close to Bolsonaro and possibly beating him in a second-round runoff.

In a country exhausted by scandal and economic disarray, former Sao Paulo governor Geraldo Alckmin, 65, bills himself as the adult in the room. “I am not a showman,” he says proudly. From the big centrist Brazilian Social Democratic Party or PSDB, Alckmin is hardly the outsider that pollsters believe Brazilians are looking for in this election. He currently has single-digit poll numbers.

Read more: Is Brazilian model a ‘replacement’ of Faryal Makhdoom?

His first attempt at the presidency in 2006 saw him beaten in the second round by the infinitely more charismatic Lula. This time, he is expected to gather strength after securing in July the backing of the multiple-party, center-right alliance that dominates Congress. This makes him the key establishment candidate and, among other advantages, will entitle him to an especially large slice of TV and radio advertising time.

Henrique Meirelles served until April this year as finance minister in current President Michel Temer’s government. That means double unpopularity: Temer is the most hated president in Brazilian history and most Brazilians don’t like Meirelles’ attempts to impose austerity on the floundering economy. The 72-year-old flag-bearer for Temer’s center-right Brazilian Democratic Movement does have one strong constituency: investors who back the fiscal discipline policies.

Some saw Ciro Gomes, who has also made two failed presidential attempts in the past, as someone capable of capturing the country’s huge leftist vote in the place of the imprisoned and still likely to be disqualified, Lula. Gomes, 60, is running with the Democratic Labor Party.

However, other leftist parties have shied away, leaving him isolated. He is seen as a volatile personality with a history of lashing out in colorful language at everyone from Lula and Temer to the country’s police. As a result, his star appears already to be waning.