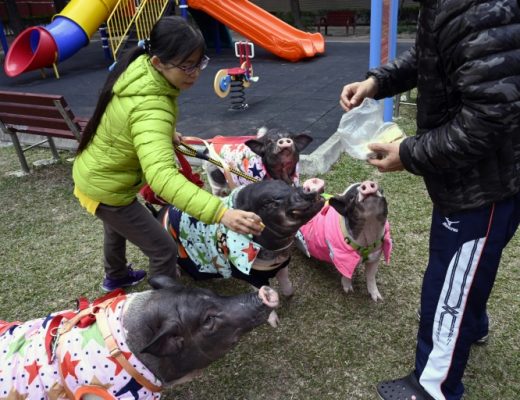 Every year is the Year of the Pig in Jenny Tsai’s ninth-floor apartment in Taiwan’s Taichung City which she shares with one fellow human and four pampered porcine housemates. Website designer Tsai says her pigs are so clever they’ve worked out how to open the fridge, which is now protected from wandering snouts with a rope.

“Pigs are very affectionate,” she says. “When I am sick they stay by my side and keep me company. But you can’t pretend to be sick or they’ll find out and wreak havoc.” It is difficult to underestimate the importance of pigs in Chinese culture — especially when it comes to food.

Taiwan’s Taichung City which she shares with one fellow human and four pampered porcine housemates.

One of Taiwan’s most prized treasures is the “meat-shaped stone”, a small piece of carved jasper with an uncanny resemblance to a chunk of stewed pork belly that draws huge daily crowds at the island’s national museum. But Tsai’s pigs are the lucky ones — they have avoided ending up on a plate.

The 43-year-old first started keeping pet pigs 12 years ago when her family gave her “Little Du”, a piglet who has grown into a somewhat robust 65-kilogramme (143-pound) hog. “When our neighbour’s pig gave birth, I stopped by to watch the piglets every day so my father and brother bought one for me,” she told AFP.

Over the years, she has taken in six more pigs that were abandoned or given away by their owners, three of which have since died.  The remaining four pigs live a life of luxury under Tsai’s care, staying in the largest room in her small apartment while Tsai and her flatmate occupy the tiny bedrooms to the side.

Each pig has its own blanket, clothes, bowl and leash while the apartment is festooned with pig-themed figurines, cushions and paintings as well as bowls and cooking pots. But keeping a pig is no easy task. Tsai once nursed a five-day-old piglet that required bottle-feeding every four hours, as well as a disabled pig rescued from a garbage dump that she wheeled in and out of her house in a cart.

Website designer Tsai says her pigs are so clever they’ve worked out how to open the fridge, which is now protected from wandering snouts with a rope.

“Pigs are difficult to raise, they can wreak havoc, they bite and they eat a lot.” Unlike dogs or cats, there is no pet hotel that accommodates pigs so their owners “can’t travel far and have to make a lot of sacrifices,” she added. Despite the challenges, Tsai said her beloved pets have brought her much joy over the years.

But she worries that the arrival of the Year of the Pig next week might lead to a spike in abandoned pets. Two Facebook pages she helps run with around 2,000 fans and fellow pig owners have already seen a rise in requests from people wanting to know more about keeping or giving away the animals.

“I hope the public will understand that pigs are not that easy to keep. I hope they will do some homework, speak to those who have experience keeping pigs and see if they have the time and space before keeping a pig.”  Tsai said she often ends up taking in abandoned pigs — especially fully grown ones.

“Nobody wants a grown pig and if some people do want it, they might have an ulterior motive — such as killing the pig to eat.”

Riyadh-Tehran rivalry in Yemen: Where is it heading?