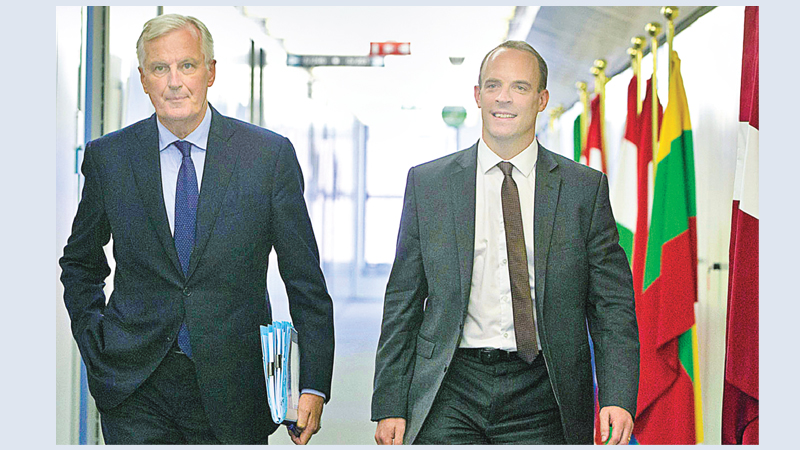 Britain’s Brexit negotiator met his EU counterpart on Thursday as Brussels and London scramble to reconcile divorce demands ahead of next month’s summit deadline. Brexit minister Dominic Raab is a regular in the EU capital, but tensions were stirred this week by reports that Europe considers his government’s exit plan to be dead in the water.

Both British and European officials played down the suggestion that EU Brexit pointman Michel Barnier had dismissed Prime Minister Theresa May’s so-called “Chequers” plan out of hand. But, as Raab and Barnier held their latest round of talks, it was clear British hopes of continuing trade in goods under a “common rulebook” will be a sticking point.

French President Emmanuel Macron on Thursday ruled out “changing our rules” just to accommodate Britain, saying it would weaken Europe.

May hopes that agreeing to common quality controls for goods would allow British manufacturers to continue to trade within the EU market after her country leaves the union next year. But officials in Brussels argue that unless London also retains EU rules on manufacturing and working practices after Brexit it may be able to compete unfairly in the single market. Last weekend, Barnier told a German newspaper he “strongly opposes” the Chequers plan, and one opposition British lawmaker has said the French negotiator has declared it “dead”.

But EU spokesman Margaritis Schinas insisted the Chequers plan is still part of the discussion. “We identified where there were positive elements and we discussed also the possibility for further discussions to address issues that still create problems,” he said. Barnier’s advisor Stefaan De Rynck went further, saying in a tweet that Barnier had said: “in no uncertain terms that Chequers has positive elements”.

But De Rynck also approvingly retweeted another British account of the meeting that noted that Barnier had described the idea of the “common rulebook” for goods as “impossible”. British officials do not appear ready to concede this point. The EU opposes British proposals for an integrated market on goods with fewer regulations on services, which is a mainstay of the British economy.

Britain argues goods and services are completely integrated into a modern economy but that protections can be introduced to make sure British manufactured goods do not gain an edge with accompanying services. French President Emmanuel Macron on Thursday ruled out “changing our rules” just to accommodate Britain, saying it would weaken Europe. “On Brexit, I think I can say we have the firm intention to follow the spirit and method we have had from the start, that is to say to work as 27 and to be extremely united in negotiations,” he said on a visit to Luxembourg.

The two sides are also discussing the terms of an agreement to trade on a fair basis after the Brexit deadline expires in March. The two sides have set an October 18 summit as the target date for agreeing on terms for Britain’s withdrawal from the European Union, giving enough time for British and EU lawmakers to ratify its terms before Brexit day on March 29, 2019.

Few in Brussels expect the October summit to be the end of the matter, predicting instead the theatrical late-night stalemate typical of EU-British negotiations. The matter may be pushed to an extraordinary summit in November when the two sides hope to strike an exit agreement and a second document to outline the future relationship.

The EU proposes that Northern Ireland stay aligned with the remaining 27 bloc members after Brexit as part of a “backstop”, or insurance policy to avoid the reimposition of border checks and a risk to Irish peace gains.

But on Wednesday, Raab warned British lawmakers might not approve the $39 billion payment to secure a Brexit deal if the trade offer appears too vague. Brussels wants to get the essential elements of Brexit settled before Austria’s EU Council presidency closes at the end of the year. But expert observers, such as Elvire Fabry of the Delors Institute, warn that any blueprint could be threatened by the “spasms of British politics” until the final hour in March next year.

“At this stage, while there is a heightened awareness of the risk of ‘no deal’, we can be confident that a certain pragmatism will prevail,” she said, predicting that some kind of free trade deal would be the final, hard-won outcome. Another major stumbling block is lingering EU concern over the fate of Ireland, which shares a border with the British province of Northern Ireland. The EU proposes that Northern Ireland stay aligned with the remaining 27 bloc members after Brexit as part of a “backstop”, or insurance policy to avoid the reimposition of border checks and a risk to Irish peace gains.

Billionaires richer than 60 percent of the world’s population: Oxfam