Britain’s Brexit blues by the numbers 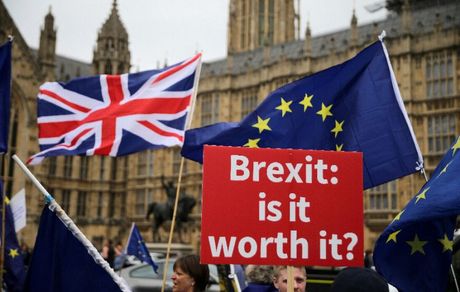 Britons may be forgiven for suffering Brexit fatigue after watching their parliament spend 500 hours debating how to leave the EU without making much headway in nearly three years. Lawmakers have spent time discussing everything from post-Brexit plant health regulations to fishing and official “flag flying days” since the island nation voted to quit the EU in June 2016.

Yet the original March 29 departure deadline is long gone and a new one is looming Friday that EU leaders will probably decide to postpone again when they meet in Brussels on Wednesday. Experts who crunch numbers for a living believe that one-sixth of all the endless hours spent talking in the House of Commons has been devoted to Brexit.

The two chambers of parliament have touched on everything from criminal justice to train licences and public sector catering.

Institute for Government data analyst Gavin Freeguard said civil servants refer to the split as Britain’s “greatest challenge of peacetime”. “All the big things that (May’s Conservative Party) promised in their election manifesto have been dropped because of it,” Freeguard told AFP.

Here is a look at the figures shaping Britain’s big Brexit battle — a campaign that might yet drag on for many more months.

3: Number of times the House of Commons has rejected the UK-EU Withdrawal Agreement the two sides reached after 17 months of talks.

12: Number of “Plan B” alternatives to May’s way forward that parliament has voted on in the past three weeks.

0: Number of “Plan B” alternatives parliament has approved.

3: Total number of Brexit-related initiatives MPs did back this year. Two focused on ways to keep Britain from crashing out of the EU without a deal — and one on renegotiating the current agreement.

1: Number of times May’s Conservative Party tried to oust her over her handling of Brexit. She survived the December 12 leadership challenge vote 200-117.

1: Number of times the opposition Labour Party tried to oust May’s government over its handling of Brexit. May survived the January 16 no-confidence vote 325-306.

3: Number of times various parliamentary parties tried — and failed — to get Brexit put to a new public referendum.

3: Number of summits EU leaders will have had by Wednesday devoted to May’s futile attempts to get the deal they all reached in November through parliament.

The bigger numbers were compiled by Institute for Government analysts using parliamentary sessional diaries and other records.

Experts who crunch numbers for a living believe that one-sixth of all the endless hours spent talking in the House of Commons has been devoted to Brexit.

501: Number of hours the House of Commons spent discussing Brexit from the moment Britain voted to leave the EU in June 2016 to the day it was supposed to have left last week. That number has since grown by a dozen hours or so.

33: The hours May has spent making statements on the EU withdrawal. But she also engages in weekly question time sessions in parliament that often last two or three hours and are consumed by heated Brexit talk.

161: Number of hours peers in the House of Lords — Britain’s upper chamber of parliament — spent discussing the EU Withdrawal Act.

Read more: ‘Both sides’ must compromise in cross-party Brexit talks: May

So what are the issues driving all this talk? The House of Commons Library summary of the Brexit topics debated this year alone is 26 pages long.

It starts with one about “Tobacco Products and Public Health” on January 7 and ends with “Flags (Northern Ireland) (Amendment)” on March 25.

The two chambers of parliament have touched on everything from criminal justice to train licences and public sector catering. An accompanying reading list of all the publications released by parliament runs to 66 pages.

It features a section on artificial intelligence and ends with a March 29 briefing paper entitled: “Brexit means Brexit… but not quite yet”.

Reuters - 8 May 2021
This expands the list of COVID-19 vaccines that COVAX can buy, and gives countries confidence to expedite their own regulatory approval, and to import and administer a vaccine.

Spanish government to meet in Barcelona amid separatist protests

Will Jagmeet Singh be Canada’s next Prime Minister?