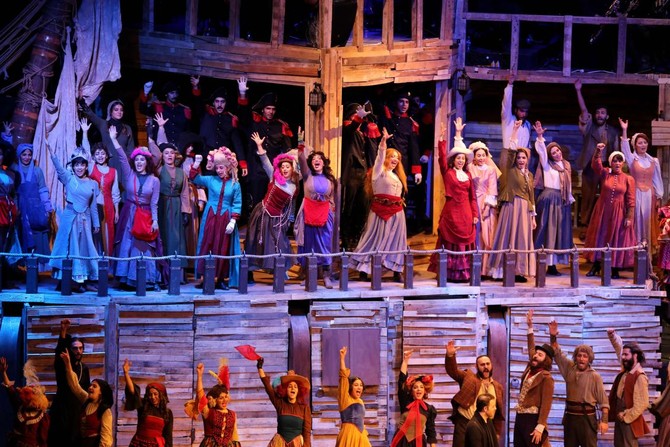 Iranian theatre director Hossein Parsaee calls Victor Hugo’s classic a “masterpiece without borders” but his groundbreaking production of “Les Miserables” that has hit the stage in Tehran has a few unique twists.

For a start, none of the actresses are allowed to reveal their own hair, and in case their wigs look too natural, the poster advertising the show carries a bright red notice underscoring that their locks are fake. Nor do the actors and actresses touch hands, or have any other physical contact throughout the musical.

This is, after all, the capital of the Islamic republic, even if the blockbuster show in the luxurious Espinas Hotel feels a world away from the usual stereotypes about Iran.  The concessions to the government’s view of Islamic rules are often subtle.

Much of the show seems to run against Iranian taboos, not least the mixed dancing and drinking in brothels and inns.

There is, for instance, always at least one other voice accompanying an actress when she sings — since female solos are taboo — although spotting the second voice can be tricky. All the other staples of a big-budget musical are here: a live orchestra, billowing dry ice and dazzling light displays.

With a cast, crew and orchestra of over 450, the production has played to sold-out 2,500-strong crowds for six nights a week since it debuted in November.

It was all Perfect

It was a mainly young, well-heeled crowd when AFP visited recently, and they could barely control their excitement at a rare chance to attend a musical in their home city. “It was so much more than I expected,” gushed Maryam Taheri, a 45-year-old housewife, after the show.

“The acting, the music, the lighting — it was all perfect.” Foreign-made TV, film and cartoon versions of “Les Miserables” — a French 19th-century epic on sociopolitical tumult, crime and punishment — have been frequently shown in Iran, where the book has also been translated.

Nor do the actors and actresses touch hands, or have any other physical contact throughout the musical.

The classic work even has the stamp of approval from supreme leader Ayatollah Ali Khamenei, who has described Victor Hugo’s book as “a miracle among novels… a book of kindness, affection and love.”

The new production is being hailed as the most spectacular play yet staged in Iran, and arrives at a topical moment with the ongoing “yellow vest” protests in France. “After 200 years you see it happening again in France,” contends businessman Mehdi Hooshyar.

Read more: The battle for Iran: Policy or regime change?

“This is good, it shows whenever their society stagnates, something like this happens to move it forward,” he said. “The revolution is still alive.”

No Miserables Allowed In

The lavishness of the production has brought its share of criticism, however. The play has come at a volatile moment in Iran, when anger at economic inequality and corruption dominates political debate.

It was a mainly young, well-heeled crowd when AFP visited recently, and they could barely control their excitement at a rare chance to attend a musical in their home city.

Director Parsaee said connecting with Tehran’s elite was part of the point.  “This story is relevant to all times, and all places, and that includes today’s Tehran. It’s about the class divide, the social breakdown and the poverty that exists today,” he told AFP.

“It’s a reminder to the audience that other classes exist and we need to see them and know about them. It’s a serious warning.”

Much of the show seems to run against Iranian taboos, not least the mixed dancing and drinking in brothels and inns. But Parsaee, who used to head the performing arts department at the Ministry of Culture and Islamic Guidance, knows the red lines well.

“The review board saw the play in its entirety before we were allowed to begin our run,” he said. “They found it completely compatible with the rules and regulations. No taboos were broken.”

The director’s love for musicals started around a decade ago when he saw “Oliver Twist”, based on the Charles Dickens classic, in London. “I was depressed for days, thinking why can’t we do this? I vowed to myself that I would one day make a musical in Iran.”

He did precisely that, bringing “Oliver Twist” to the stage in Tehran last year.  And now he has established a production company to train a new generation of musical directors. “I’ve opened the door on musicals in Iran, and now, like a relay race, others must advance it to a point that there won’t be any difference between Iran and Broadway.”

Iraqi farmers fight to save cattle from drought