Donald Trump recently tweeted that a controversial video of police officers shoving an elderly protestor to the ground was a 'set-up'. This remark has drawn the ire of people from all quarters of American society, with everyone castigating Trump for reckless behavior. 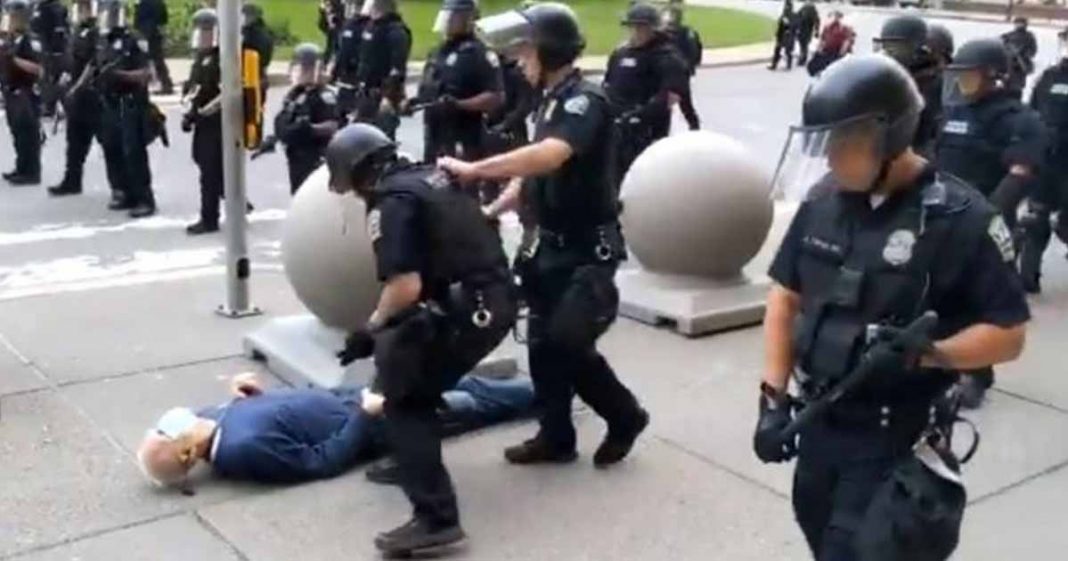 President Donald Trump suggested Tuesday that an elderly man bleeding from the head after he was shoved to the ground by US riot police was a far-left agitator faking the shocking incident.  This statement will add more fuel to the fire, as it goes completely against what the protestors maintain happened in the Buffalo Police video. The United States is currently undergoing some of the largest anti-racism protests in its history, and the Trump administration has been less than forthcoming in its response.

“I watched, he fell harder than was pushed. Was aiming scanner. Could be a set-up?” Trump asked on his massively followed Twitter account.

Buffalo protester shoved by Police could be an ANTIFA provocateur. 75 year old Martin Gugino was pushed away after appearing to scan police communications in order to black out the equipment. @OANN I watched, he fell harder than was pushed. Was aiming scanner. Could be a set up?

Two police officers in Buffalo, New York, were charged with assault after the incident last week in which protester Martin Gugino, 75, was pushed and fell straight backwards after approaching an advancing line of police in helmets and body armor.

Video showed blood pooling under the back of Gugino’s head as he lay motionless. He is still in the hospital.

It wasn’t clear what Trump wanted to say by writing “aiming scanner” and that Gugino was “appearing to scan police communications in order to black out the equipment.”

The president’s tweet was apparently based on watching a report on OANN, a right-wing television network that specializes in conspiracy theories and has become a favorite at the White House.

In that clip, OANN promoted the idea of a “false flag provocation by the far left group Antifa.” It claimed that “newly released video” showed Gugino “trying to scan police communication” with his phone.

Read more: New US police abuses: US braces for outpouring of anger over the weekend

The Conservative Treehouse, which is among the news sites listed in FactCheck.org’s “misinformation directory”, claimed over the weekend that Gugino “was attempting to capture the radio communications signature” when he was shoved to the ground by the police.

During the 2016 presidential election the Conservative Treehouse peddled the conspiracy theory that Hillary Clinton might have cancer. It has also spread conspiracy theories about student David Hogg, who survived the Parkland school shooting and has become a prominent gun control activist.

The Buffalo police video only shows him holding his telephone in his right hand. Police scanner apps, which simply allow you to listen to radio traffic on police frequencies, are completely legal and common in the United States.

The video further fueled anger around the country at large protests against police brutality. Trump, who is behind in the polls five months ahead of his reelection battle in November, is campaigning on a slogan of “law and order.”

His Democratic opponent Joe Biden tweeted in response to the president by saying that his father “used to say there’s no greater sin than the abuse of power. Whether it’s an officer bloodying a peaceful protester or a President defending him with a conspiracy theory he saw on TV.”

My Dad used to say there's no greater sin than the abuse of power.

Whether it's an officer bloodying a peaceful protester or a President defending him with a conspiracy theory he saw on TV.

I'm a Catholic – just like Martin. Our faith says that we can't accept either.

The New York governor, Andrew Cuomo, responded to Trump’s claims, which were offered without evidence, on Tuesday, describing the president’s behavior as “cruel and reckless”.

“The president is tweeting conspiracy theories about the Buffalo incident based on no evidence, no proof,” Cuomo said.

“Was the blood coming out of his head staged? Were our eyes lying to us? No.”

Gugino’s attorney, Kelly Zarcone, told WBFO News on Tuesday that the 75-year-old has been taken out of intensive care but is “still hospitalized and truly needs rest”.

“Martin has always been a peaceful protester because he cares about today’s society,” Zarcone said.

“We are at a loss to understand why the president of the United States would make such dark, dangerous and untrue accusations against him.”

Trump has long been a fan of bizarre conspiracy theories, notably his extensive promotion of the policy on “birtherism” which is based on the fiction that Barack Obama was not born in the United States and therefore shouldn’t have been president.

Gaza ceasefire: A temporary solution or a final end to Israel’s atrocities?