Cabinet Division give the task to investigate RTS’ alleged failure 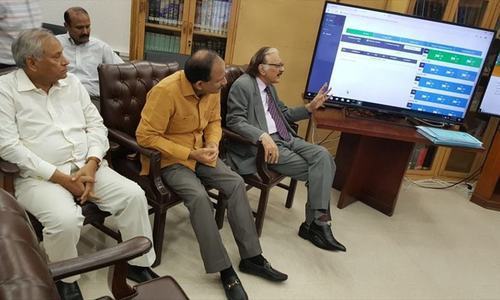 Amidst severe allegations of rigging in the General Elections 2018, the Election Commission of Pakistan (ECP) on Thursday directed the Cabinet Division to form an inquiry committee to investigate the causes of alleged failure of the Result transmission System (RTS) during July 25 general elections.

It is important to mention here that all mainstream political parties except the PTI have rejected the results of the elections and have demanded the explanation from the ECP.  Political parties have now decided to join the assemblies to give a tough time to the government of PTI.

The ECP spokesperson Nadeem Qasim has said the NADRA was not trying to hide its own weakness and putting the blame on the ECP.

According to media reports, the ECP said the Cabinet Division should form a committee comprising technical experts from National Telecom and Information Technology Security Board (NTISB) and the Pakistan Telecommunication Authority (PTA).

Moreover, committee has been asked to analyse the RTS project, the “concept of RTS in terms of its implementability”, its preparation and finalisation by National Database Regulatory Authority (Nadra), the quality and extent of training imparted to its users, the “train of events taking place on the night of July 25 and thereafter”, fix responsibility [for any malfunction] and make recommendations for future, according to the terms of reference decided by the commission, read a letter written to the Cabinet Division secretary.

Read more: Failure of RTS on Election Day under investigation

The controversy got momentum when the political parties alleged on the night of the elections that their political agents were not being given form 45. The ECP, however, rejected the allegations and assured the nation that everything was going according to the rules. The ECP also clarified that the results were being delayed due to the failure of RTS, and not any other reasons.

However, the claims of the ECP become questionable when the NADRA officials said the RTS was working properly without any disruption and it was the ECP which directed the presiding officers not to use the system and reach to the office of the ROs.Experts in Pakistan challenge the claims made by the officials of NADRA.

The most important point is that if the ECP was deliberately delaying the results and directed the presiding officers not to use the RTS then how the ECP managed to contact with almost 85,000 Presiding officers across the country

Senior anchorperson Dr. Moeed Pirzada said, “RTS was developed solely by NADRA, it was custodian, operator on key turn basis; RTS suddenly failed or was made to fail around 11.30pm; first blame was thrown on “Umer Saif” of PITB & now key officials appear to be blaming ECP which wants full investigation. Dawn is being misled”

He also pointed out that “Dawn story misleading & NADRA claims bogus; ECP could not have ordered 85,000 Presiding Officers to stop sending Form-45; this was either a genuine failure or deliberate act, but whatever happened inside NADRA – I might appear on Dunya TV to tell.”

The most important point is that if the ECP was deliberately delaying the results and directed the presiding officers not to use the RTS then how the ECP managed to contact with almost 85,000 Presiding officers across the country? Has every presiding officer agreed with the ECP and did not disclose it? For many political commentators in Pakistan, the claims being made by the officials of NADRA do not make any sense but reflect two points; either someone within the NADRA intentionally delayed the results by introducing an untested RTS or now the NADRA is deliberately making the results controversial and questionable.

It is also important to mention here that the spokesperson of the ECP has categorically rejected the allegations of the NADRA officials. The ECP spokesperson Nadeem Qasim has said the NADRA was not trying to hide its own weakness and putting the blame on the ECP.

Read more: Rigging in plain sight – should the ECP do more

The committee has been given the task to probe into a highly sensitive matter. It is now hoped that the committee will come up with something concrete to determine as to how caused delay in the results on 25th July General Elections?

Does the BJP’s massive victory prove that liberalism is dead in India?