Can ISIS be stopped from expanding into Asia? 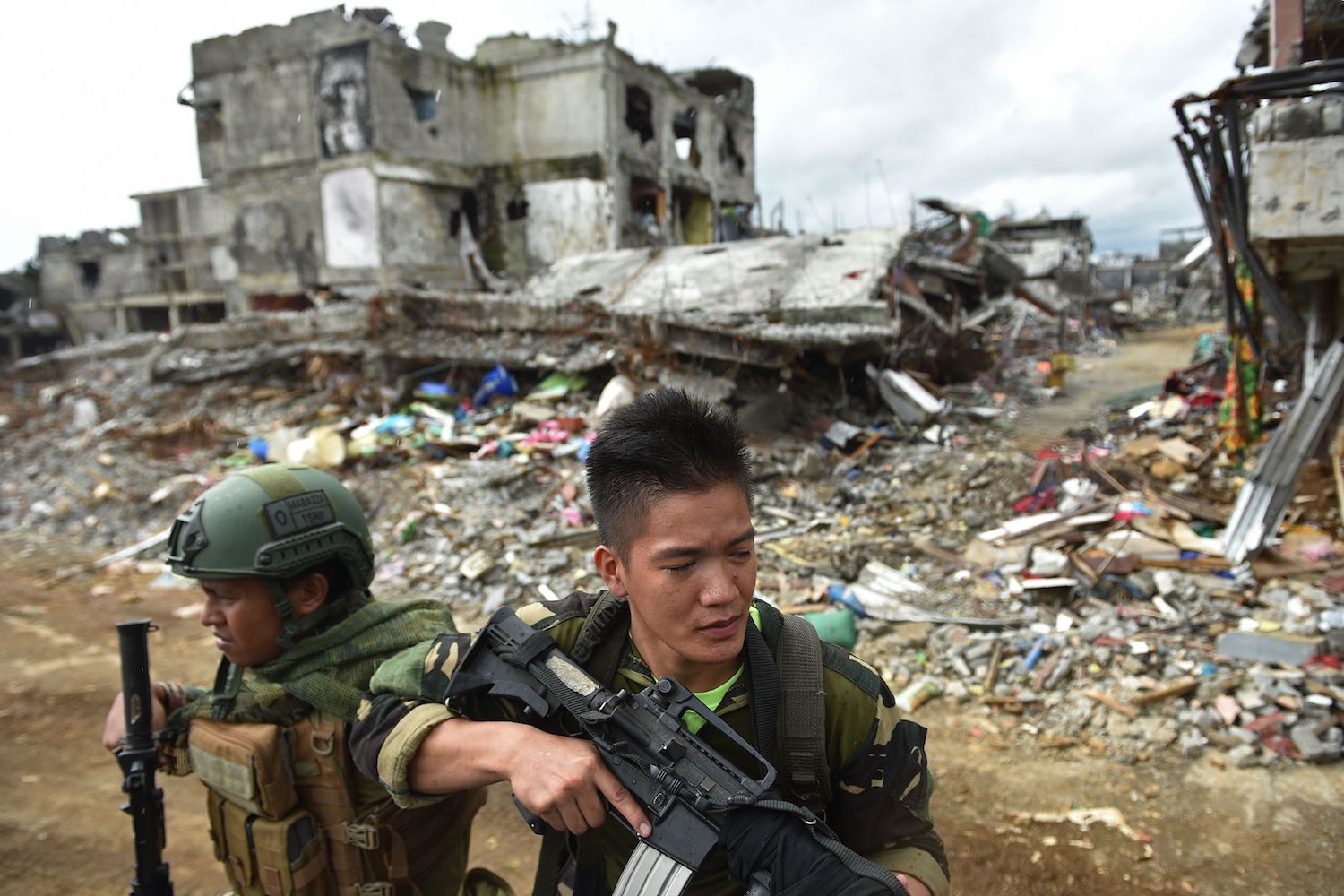 Quietly but surely, the Islamic State group (IS, formerly known as ISIS) is benefitting from the failures of al-Qaeda and the Taliban.

Roughly defined by IS, Khorasan is a region that stretches from Uzbekistan and Eastern Turkmenistan in China to Iran in the west and Bangladesh in the east, and looks to be the new target for the extremist group in the expansion of its “caliphate”.

More than seeking foot soldiers from this land of “Ajami”, or Persians, the savage militia have sought ways to have the local population claim allegiance to their group.

Unlike their affiliates in Iraq and Syria, the Asian branch of IS is not yet interested in making the headlines at this stage. Instead, it is slowly but surely building its grassroots support.

This piece, hugely informative, still fails to address the fundamental question that who is financing the rise of ISIS, with a clear middle eastern identity, into Central & South Asia? – Editor GVS

It appears their strategy at present is to wait for Afghanistan’s Taliban and its allies in Pakistan’s tribal regions to become too battered and bruised to stay in the game. They have played the game so well that their ghostly presence, or existence, is often questioned by Pakistani officials.

Two people who suggest that the IS has no presence in Pakistan are Sartaj Aziz, an adviser to Pakistan’s prime minister on national security, and Commander General Hidayatur Rehman, of the Peshawar Corps.

Rehman is at the helm of the fight against the Taliban’s Pakistan chapter and believes that IS is little more than a small and insignificant name change of Mullah Mohammed Omar’s fundamentalist group.

“For us, it’s just a change of name, and there is no need for Pakistanis to worry. There are several defections in the Taliban now, which are becoming part of [the Islamic State group]. But we’re well aware of the situation and are able to tackle them effectively,” says the general.

“[He] does not deserve spiritual or political credibility,” Baghdadi scoffed.

The IS leader followed on by describing Osama bin Laden’s former host as a “fool” and an “illiterate warlord”.

This attack on the Taliban’s spiritual leader might have been aimed at attracting the younger demoralised, disgruntled and radicalised elements of the group to IS.

So far, IS’ recruitment drive has attracted many takers, some from as far away as Bangladesh and India.

Even in Asia’s prosperous Silicon Valley – Bangalore – support for the Islamic State is strong in some techie circles.

The black-and-white flag of the “caliphate” has also been seen raised in Afghanistan’s Ghazni, Kabul, Zabul, Kunduz, Farah and Nimroz provinces.

Mehdi Masroor Biswas uses the twitter handle Shami Witness and hit global fame for his links to the group, before he was arrested by Indian police.

He flew out to Baghdad to fight for the Islamic State in Iraq but when he finally reached their bases in the north he was tasked with cleaning the camp’s toilets. Yet closer to home, support for IS appears to be becoming worryingly more apparent.

Since October, two video messages have been circulated online of a Pakistan-based Taliban splinter group with its members swearing allegiance to the “caliph” in Mosul.

Al-Baghdadi’s spokesman, Abu Muhammad al-Adnani, confirmed that the Pakistani Taliban commander Hafiz Saeed Khan has been appointed the IS point-man in the area with Abdul Rauf Khadim being second-in-command.

Meanwhile, Yousaf al-Salafi, a Pakistani-Syrian, was arrested in Lahore for suspected links to IS and serving as a recruiting agent in Pakistan.

On February 9, a US drone strike claimed the life of Abdul Rauf Khadim, and one month later his successor Hafiz Waheed was killed in a strike in Helmand province according to the Afghan defence ministry.

The black-and-white flag of the “caliphate” has also been seen raised in Afghanistan’s Ghazni, Kabul, Zabul, Kunduz, Farah and Nimroz provinces.

Meanwhile, the Taliban are under intense pressure following an offensive launched by the Pakistani military.

The ranks of the Taliban are in a shambles, and the influence of its Afghan-based leadership under Mullah Fazalullah appears to be weakening by the day.

The more extreme and trigger-happy elements of the Taliban are likely to splinter off and join the IS group.

Meanwhile, Chinese media have reported the killing of at least three youths who attempted to join the militants in Syria and Iraq.

Eastern Turkmenistan houses the Muslim Uighur people, who have faced intense religious persecution in China and has become a preferred recruitment ground for Baghdadi’s militant group.

The East Turkestan Islamic Movement (ETIM) is a feared militant outfit in the area with a similar ideology to IS, and has been designated as a terrorist organisation by the United Nations.

The bodies of the “martyrs” returned to Pakistani cities, Gilgit, Karachi, Multan and Jhang via Lebanon. Although Shia make up less than 9 percent of population, they make up a fairly powerful force in Pakistan.

A sign of the growing sense of extremism in Eastern Turkmenistan is that around 300 Chinese nationals have joined IS, entering Syria and Iraq via Malaysia. Jundullah, a militant group based in Balochistan, southwestern Pakistan and southeastern Iran, has also sworn allegiance to IS.

This Baluchi and Sunni-dominated Sistan-Baluchistan province of Iran have faced years of discrimination from Iran’s hardline ayatollahs. Jundullah has already declared allegiance to IS.

This was followed by a sharp increase in attacks on Iranian border guards on the Pakistan border.  Jundullah is also suspected of being behind a string of viscous attacks on Pakistan’s Shia Hazara community in Balochistan’s provincial capital, Quetta.

As the Syrian revolution progressed into a brutal civil war, the Lebanese armed group Hizballah have been accused of recruiting Shia fighters from Pakistan.

Tehran’s patronizing and discriminatory attitude towards its Sunni Balochi population also poses the potential to whip up serious sectarian tensions in Iran.

Many from the Hazara community have been found to be fighting on the side of the Syrian regime. The bodies of the “martyrs” returned to Pakistani cities, Gilgit, Karachi, Multan and Jhang via Lebanon. Although Shia make up less than 9 percent of population, they make up a fairly powerful force in Pakistan.

Demonstrations in Karachi in support of Shia revolts into Bahrain have brought Hizballah’s Pakistan chapter out into the open. In return, Pakistani Salafis have also taken up arms against Bashar al-Assad’s forces in Syria.

Islamabad has so far failed to curb militant sectarian tendencies and choke the foreign financiers on either side of the conflict.

Less worried about Pakistanis joining the fighting in Iraq and Syria, intelligence services are concentrating on preventing deepening Shia-Sunni hatred in Pakistan spilling out into sectarian bloodletting on the scale of Iraq and Syria.

If the situation reaches this stage then banned jihadi groups such as Lashkar-e Taiba and Jaish-e-Mohammad could find themselves married to the IS, in their search for funding and support from a global brand.

Ideologically, they are already akin to Baghdadi’s militant group.

Countries in Central and South Asia carry a heavy burden from their colossal but uncaring bureaucracies.

In Afghanistan, the ground is more fertile for IS recruiters, where the prime challenge for Kabul has been to integrate former and existing militants into the national project, which is said to be done through government jobs and handouts.

Qatar is said to enjoy significant influence over both the Taliban and Afghan governments, while Pakistan and the United States also seem keen to curb the eastward expansion of IS.

Over the next few months, the influence of IS in the Khorasan region depends on a number of factors.

If the Pakistani leadership fails to do this and prevent the financing of sectarian groups then IS will use this sense of apathy as an invitation to enter the country in a “bigger” way.

First, if Pakistan fails to plug the power vacuum in its tribal areas following the Zarb-e-Azb military operation, the non-state actors led by the next generation of extremists could try and exploit the situation and enter the regions when government soldiers leave.

To counter this, Islamabad will need to give equal political and constitutional rights to the people of tribal areas and most likely spend hefty sums of money to develop this impoverished, crime and conflict-stricken region.

If the Pakistani leadership fails to do this and prevent the financing of sectarian groups then IS will use this sense of apathy as an invitation to enter the country in a “bigger” way.

Over the border in China, increasing oppression of the Uighur population by Beijing will also spur on more Chinese to join IS. Bans on the hijab and fasting during Ramadan are serving to radicalise many of China’s moderate Muslims.

With this in mind, the Eastern Turkmenistan Islamic Movement might throw in its lots with the IS.

Tehran’s patronizing and discriminatory attitude towards its Sunni Balochi population also poses the potential to whip up serious sectarian tensions in Iran. Tehran has so far used Islamabad as a coat-hanger for its troubles arising from Jundullah.

With Hindu nationalists now in power in India, all minorities, particularly Muslims, find themselves in a precarious position. “Forced” religious conversion and the banning of the slaughter of cows in certain states could serve in radicalising its embattled Muslim population.

More than seeking foot soldiers from this land of “Ajami”, or Persians, the savage militia have sought ways to have the local population claim allegiance to their group.

To the east in Bangladesh, a vengeful Hasina Wajid, the country’s prime minster, has been accused of using unfair electoral and administrative tactics to her advantage.

Dhaka’s controversial courts, like in Egypt, are handing out huge numbers of death sentences to aging leaders of the Islamist Jamat-i-Islam organisation, a sister organisation of the Muslim Brotherhood.

A polarisation between secularist government and its large Islamist population is serving to radicalise some sections, and win IS new sympathisers.

Countries in Central and South Asia carry a heavy burden from their colossal but uncaring bureaucracies.

Time is of the essence here and new strategies and tactics will have to be adopted to prevent further isolation of its Muslim populations that could lead to increased radicalisation.

Naveed Ahmad is an investigative journalist and academic based in Qatar. During his 22 years of reporting and writing experience, Ahmad focused on diplomacy, security and governance. He won Jefferson Fellowship in 2000 and UNAOC-ICFJ Cross-Cultural Reporting Award 2010. Twitter: @naveed360. The views expressed in this article are the author’s own and do not necessarily reflect Global Village Space’s editorial policy. This piece was first published, in April 2015, in The New Arab. It has been reprinted with permission.

Dirilis Ertugrul most searched TV series in Pakistan in 2020