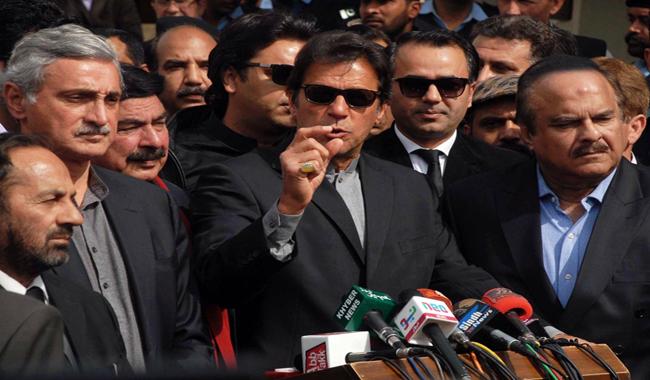 Despite being in politics/power for over three decades, the Sharifs have been able to dodge accountability. On the other hand, the original party of change, the People’s Party, and its leadership were held accountable by the Ehtesab Commission (EC) established by President Farooq Leghari after the dismissal of the government of Benazir. It was the first major attempt at accountability in the country.

Pakistan will come back and remain on track if the electoral exercise remains credible. Let accountability continue

What followed was more harassment, less accountability. References were filed against her all over the country. Half of her time was spent traveling. Finally, her “Jiyala’ Rehman Malik taped a conversation between the then Law Minister Khalid Anwar with the Chief Justice of Lahore High Court (LHC) and judge Malik Qayyum. The tape was then presented to the Supreme Court of Pakistan (SCP) for a mistrial.
Read more: Disqualified Nawaz Sharif’s road journey to Lahore-Part 2

Finally, Benazir was granted bail and all three Conniver’s sent home. I have purposely omitted the name of Chief Justice of (LHC) as he is no longer in this world. But the situation was very sad. The Law Minister was the son of a very respected Ex-Prime Minister Chaudhry Muhammad Ali, the father of the Chief Justice had occupied the same position before and so was the father of the puisne judge. All three blue-blooded individuals were involved in below-the-belt activities, what a shame.

It is true that accountability is like law, it either applies to everyone or no one. The dictionary definition being, ‘liable to account’ and has a broad application. Favoritism, nepotism, influence peddling, abuse/misuse of authority, delays, red tape, financial corruption etc all fall into its scope.

The only way forward and is free and fair elections. Ballot tampering will not work and should not be tried again for the 11th time

Only omnipotent monarchs were considered above accountability elected representatives of the people, bureaucrats, judges, khakis, businessmen are all liable to account. In a representative democracy, the parliament is the highest authority that must be accountable to its voters. A credible ballot can provide effective accountability but unfortunately ‘ballot tempering’ has taken away this check on the politicians.
Read more: Ishaq Dar trying desperately to land in Washington

Now that the process has been initiated, it should proceed unhindered. Five judges of the liberated courts (Azad Adlia) have disqualified the Prime Minister (PM) from holding public office followed by references in the National Accountability Bureau (NAB). In order to remain in the political arena, the Sharifs have to come clean.

Pointing fingers at others will not help. The Sharifs believe that every successful person in Pakistan is corrupt or ‘doh (two) number’. Individuals or institutions that come in the way of their corruption by enforcing rules and regulations are either sidelined or crushed. There is no room for dissent or discussion; either deliver or face demolition is their approach.

With the accountability of Sharifs, their peers and followers are also in trouble. Chairman SECP is behind bars for record tempering to favor his mentors. Being a party of interests with no ideology, there are hardly any clean individuals in the party fold. Currently, the parliamentary group of the party is sticking together to save their skin.

Once the references are processed, the good, bad and the ugly will become more and more visible. Amnesty from prosecution will be sought by most individuals as was done in the nineties. As a party, Muslim League has been a mistress of the powerful ever since the creation of Pakistan.
Read more: Ishaq Dar trying desperately to land in Washington

Ayub Khan’s Pakistan Muslim League (Convention) PML-C folded when the dictator fell. The Muslim League house on Davis Road is now in the control of PML-Q formed by Musharraf. PML-Pagaro/Junejo was the brain child of Zia from which emerged PML-N. While several brands of the League exist even today, the two main surviving factions are; PML-N led by the Sharifs of Lahore and PML-Q under the Chaudhrys of Gujrat, both equally corrupt and lethal for democracy.

Like Farooq Lehgari, President Musharraf talked about accountability but failed to deliver. The Ehtesab Bureau was replaced with NAB which was initially headed by Generals in uniform but remained ineffective. The Sharifs, under the astute guidance of their father, left the country under a negotiated settlement. Once they were gone, their accountability ceased, those who remained behind were neutralized and cases were withdrawn.

Pervez Musharraf was confident that both Sharifs and Bhuttos would not be able to stage a comeback. Shaukat Aziz as PM was involved in their cover up and worked against the interests of the nation and his boss. That is why the General alone is being tried under Article 6 while the PM and the Law Minister have been spared for reasons best known to the Sharifs.
Read more: “History was made: Decline of a Dynasty Televised Live”

I do not agree with General Musharraf that dictators put the country on track while the elected leadership derailed it. In fact, it is the other way around. Worst being the political offspring (Siasi Bachay) of the dictators like the Sharifs of Lahore and the Chaudhrys of Gujrat who have been dodging accountability by serving the dictators. Till 1985, corruption in the country was contained.

The party-less elections opened floodgates that have to be shut by effective across-the-board accountability starting with but not limited to the Sharifs of Lahore, who has now turned into a Mafia as pointed out by the Supreme Court. However, the only way forward and is free and fair elections. Ballot tampering will not work and should not be tried again for the 11th time. Pakistan will come back and remain on track if the electoral exercise remains credible. Let accountability continue.
Dr. Farid Malik is a prominent technical and management expert in mining, materials, engineering and high-tech industry; he is a regular columnist for The Nation and Pakistan Today. He is ex-Chairman, Pakistan Science Foundation. This article was first published in The Nation and is republished with the permission of the author. The views expressed in this article are the author’s own and do not necessarily reflect Global Village Space’s editorial policy.

US vs Iran: Doors of diplomacy have been closed

Time to stop being duped by the private education industry