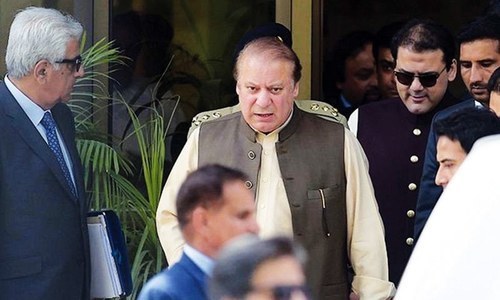 What Dr. Shahid Masood calls ‘Operation Dhabardoos’, seems to be well under way.

Braving through a barrage of criticism and character assassination, the famous Panama case JIT has submitted its final report in the honorable Supreme Court of Pakistan. And the report reads more like an epitaph on the political as well as personal legacy of Mian Nawaz Sharif and his family.

Let us put this in slight historical context. For almost three decades now, several ‘informed’ people have been whispering (in quiet drawing rooms, across Pakistan) that Mian Nawaz Sharif and his family own asset/properties worth billions, across the Middle East and Europe. None of which, of course, were disclosed by the Sharif family in their tax records and electoral filings. Several individuals (from among our political elite) claim to have visited and stayed in such properties, as far back as the early 1990s. However, almost in tacit subservience to the status quo, no institution in Pakistan made any (comprehensive) effort to investigate the matter or collect the relevant documentation.

Nawaz Sharif is not another name for democracy. Just the way Iftikhar Chaudhary was not the same as the Supreme Court. And Raheel Shareef was not, in himself, the Pakistan Army.

In April of 2016, just as ‘dharnas’ and ‘longer marches’ had begun to subside, and Mian Nawaz Sharif was beginning to tighten his grips on Pakistan’s political paradigm, Panama Leaks took the world political stage by a storm. As 11.5 million leaked documents, belonging to Panamanian law firm Mossack Fonseca, were made public by the International Consortium of Investigative Journalists (ICIJ). These documents revealed that several international leaders, or their close relatives, had parked assets in offshore companies, without requisite disclosures. And the names included the immediate family members of Mian Nawaz Sharif.

After much public haggling and political protests, the honorable Supreme Court of Pakistan took cognizance of the matter. And, on April 20th, 2017, a five-member bench of the apex court rendered its (interim) verdict, in which two honorable judges decided to, inter alia, disqualify the Prime Minister. The remaining three honorable judges (who are members of the ‘implementation bench’) formed the majority, and the court ordered that a (hand-picked) multi-institutional JIT must investigate the matter before a final judgment can be rendered.

In this backdrop, the JIT report is of tremendous significance. It emanates out of an accusation that was not made on the basis of any partisan agenda (Panama Papers) and was concluded in the supervision of a non-partisan institution (the honorable Supreme Court of Pakistan).

The report makes damning observations about Sharif family’s financial matters. And also about the shoddy manner in which they approached and prepared for the matter (before the Supreme Court as well as the JIT).

A bare perusal of the JIT report reveals blatant inconsistencies within statements made by members of the Sharif family. Mr. Tariq Shafi, for example, a key witness in the entire saga, confessed to never having (even) read the sworn Affidavit that was submitted, under his name and signature, before the Honourable Court. It seems as though the Sharif family, and its allies, never took the time to sit together and agree on a consistent story that may be considered ‘believable’ in a court of law. To make matters worse, the official documents received by JIT, from foreign governmental officials, under the Mutual Legal Assistance Treaty, uncovered blatantly fabricated lies by the Sharif family, thus demolishing any chances of a plausible defense.

After parsing through voluminous evidence, the JIT report draws numerous damning conclusions about several members the Sharif family. Most importantly, the JIT makes specific (and irrefutable?) conclusions about Mian Nawaz Sharif and his political heir, Mrs. Maryam Nawaz: 1) Mrs. Maryam Nawaz is the beneficial owner of Neilsen and Nescoll, (per the Financial Investigation Agency, British Virgin Islands); 2) Mian Nawaz Sharif is the Chairman of off-shore company FZE Capital (per Jabel Ali Free Zone Authority (JAFZA)); 3) Sale/purchase agreements, submitted before the Supreme Court, by the Sharif family, were fake/fictitious (per Ministry of Justice, UAE.); 4) Declarations of Trust, submitted by Sharif family, were fake (using the font ‘Calibri’, which did not exist in commercial use in 2006); 5) Mr. Nawaz Sharif made a ‘mis-declaration’, to the tune of Rs. 45 million, in his Wealth Statement for 2013.

In anticipation of such conclusions, even before the report had been finalized, PML-N coterie announced that it would ‘reject’ the findings of JIT. Initially, this criticism was focused almost exclusively on the non-inclusion of Al-Thani’s testimony. However, since the release of JIT report, and the unearthing of conclusions drawn therein, PML-N has expanded the circumference of its criticism to include objections on ISI and MI’s membership of the JIT, as well as Justice Sheikh Azmat Saeed’s presence on the bench.

The Sharif family has a constitutional and legal right to file objections to the JIT report. And they should. If only so that the ‘due process of law’ can be taken to its logical conclusion, without missing a beat. But the time for objecting to the constitution of the Honorable Court’s bench, or membership of JIT, has now passed. Such chatter is disingenuous at best, and malicious at worst. And a seasoned political party, such as PML-N, should know better.

Panamagate Hearing Resumes in the SC

The all-important question is: can the honorable Court disqualify the Prime Minister (and Maryam Nawaz), without referring the matter to trial court? And, sadly for PML-N, the answer is in the affirmative.

In terms of the constitutional process, this three-member implementation bench will hear and decide the objections (if any) filed by the Sharif family. Thereafter, the matter will (in all likelihood) be referred to the original five-member bench, which heard the Panama case, for a final decision.

The all-important question is: can the honorable Court disqualify the Prime Minister (and Maryam Nawaz), without referring the matter to trial court? And, sadly for PML-N, the answer is in the affirmative. To this end, it is important to recognize that two different ‘kinds’ of questions are before the honorable Court. First, a set of questions concerning Sharif family’s culpability in possible money laundering, tax evasion, non-declaration and forgery. These issues, falling primarily within the ambit of NAB and FIA, cannot be decided without a trial. And the honorable Court could issue directions in this regard. However, the second issue, concerning a possible disqualification under Article 62 and 63 of the Constitution, does not require any trial.

The Supreme Court can decide the question of disqualification, as an interpretation of the law, in the exercise of its powers under Article 184(3) of the Constitution. As it has done so in the past (ref: Farahnaz Ispahani case, Yousaf Raza Gillani case). The Honourable Supreme Court, in light of Article 184(3) and Article 187(1), which empowers the Honorable Court to do “complete justice”, it is well within the power of the apex Court to disqualify a member of the National Assembly; even is such a member is the Prime Minister. In fact, before every election cycle, even the ‘Returning Officer’, in an exercise of summary jurisdiction (read: not a trial) has the power to qualify or disqualify candidates on the basis of Article 62 and 63 of the Constitution.

These are troubling times for our national policy. Powerful individuals – including Asif Zardari, Altaf Hussain, and now (probably) Nawaz Sharif – seem to be exiting the national stage. But, throughout this testing period, we must remain cognizant of the difference between individuals and institutions. Nawaz Sharif is not another name for democracy. Just the way Iftikhar Chaudhary was not the same as the Supreme Court. And Raheel Shareef was not, in himself, the Pakistan Army. While defending their political leader, PML-N supporters must recognize that it is a democracy that we must save in this country. Not necessarily Nawaz Sharif. And if the JIT report or the resultant belligerence of PML-N leaders are anything to go by, Nawaz Sharif, at this moment, is not a friend of democracy in our land.