Can the US make Iran sanctions stick? 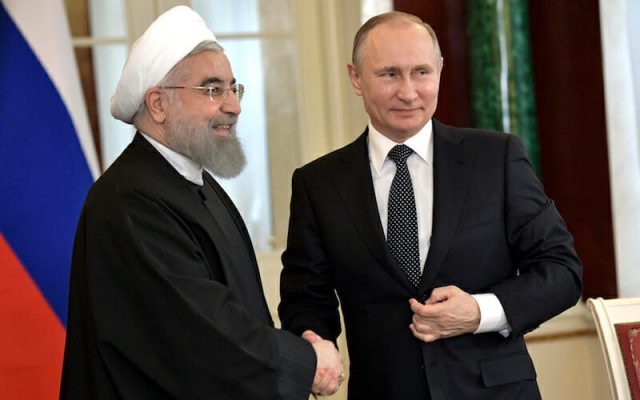 Recent Iranian trade figures suggest that the United Arab Emirates, a strong backer of US efforts to squeeze Iran economically, could emerge alongside China as the Islamic republic’s foremost lifeline in seeking to blunt the impact of harsh sanctions. Russia and Oman rather than Europe are emerging as runners-up in possibly enabling Iran to circumvent sanctions.

Casting further doubt on Europe’s ability and will to stand-up to US secondary sanctions, despite its vocal support for the embattled 2015 international agreement that curbed Iran’s nuclear program, are new German financial rules scheduled to take effect this month. The rules could delay or prevent crisis-ridden Iran from repatriating Euros 300 million (US$347 million) deposited in an Iranian-controlled bank in Hamburg.

Figures for Iranian trade in the period from 21 March to 22 July of this year, compiled by Iranian energy and economics analyst Faezeh Foroutan, show China and the UAE jointly accounting for 39.8 percent of Iranian imports and 37.8 percent of its exports. By comparison, nine members of the European Union, including heavyweights Germany, France and Britain shouldered only 15.5 percent of imports and 7.93 percent of exports.

Iranian officials told the German government that the foreign currency was needed to enable Iranians who travel abroad but don’t have acceptable credit cards because of sanctions to be able to pay their travel expenses.

Iranian leaders have said that the future of the nuclear agreement, officially dubbed the Joint Comprehensive Plan of Action (JCPOA), in the wake of the US withdrawal would depend on the ability of Europe, China and Russia to ensure that the impact of US sanctions would be substantially blunted. Iranian foreign minister Mohammad Javad Zarif insisted earlier this week that China’s role was key. “The role of China in the implementation of JCPOA, in achieving JCPOA, and now in sustaining JCPOA, will be pivotal,” Mr. Zarif said.

China, a signatory to the nuclear agreement alongside Europe, Russia and the United States that withdrew from the accord in May, has rejected US requests to cut Iranian oil exports even it reportedly promised not to increase them. China is Iran’s top energy export market. China’s refusal to cut back on Iranian oil purchases threatens to render the Trump administration’s goal of reducing Iranian exports to zero unachievable and means that its November 4 deadline to do so is unrealistic.

Acting out of self-interest, China, moreover, appeared to be willing to strengthen the Islamic republic in other ways, including by supporting militarily the Iranian-backed regime of Syrian president Bashar al-Assad in its quest to gain control of Syria’s last major rebel stronghold in the northern region of Idlib.

Speaking to Syrian pro-government daily Al-Watan, China’s ambassador to Syria, Qi Qianjin, said that China was ‘following the situation in Syria, in particular after the victory in southern (Syria), and its military is willing to participate in some way alongside the Syrian army that is fighting the terrorists in Idlib and in any other part of Syria.” The ambassador was referring to recent Syrian victories against rebel forces in southern Syria and on the Golan Heights.

Figures for Iranian trade in the period from 21 March to 22 July of this year, compiled by Iranian energy and economics analyst Faezeh Foroutan, show China and the UAE jointly accounting for 39.8 percent of Iranian imports and 37.8 percent of its exports.

Chinese participation in a campaign in Idlib, the dumping ground for rebels evacuated from elsewhere in Syria, including Uyghur fighters from the north-western province of Xinjiang, would be China’s fist major engagement in foreign battle in decades. China worries that Uyghur fighters may want to return to Xinjiang.

The UAE’s potential role in helping Iran deflect US sanctions may not be surprising given the fact that Dubai has long functioned as a key transshipment point for Iran with trade in the year ending at the end of March topping US$16.8 billion but is notable given Emirati backing for the US sanctions.

Iran, nonetheless, in response to a series of UAE measures against Iranian financial networks, has sought to shift its export hubs to Qatar and Oman and strengthen economic ties with Russia. The UAE “has been Iran’s no. 1 trade partners for years. The point is the growing role of Russia and Oman,” Ms. Foroutan said, expressing doubt that Oman could replace the UAE in the short term.

Russia advised Iran during a meeting between President Vladimir Putin and Ali Akbar Velayati, a senior adviser to Iran’s supreme leader, Ayatollah Ali Khamenei, that his country was willing to invest US$ 50 billion in the Islamic republic’s oil and gas sector. The two men met days before Mr. Putin’s summit last month in Helsinki with president Donald J, Trump.

Mr. Velayati said a Russian oil company had already signed a US$4 billion deal with Iran that “will be implemented soon” and that “two other major Russian oil companies, Rosneft and Gazprom, have started talks with Iran’s oil ministry to sign contracts worth up to US$10 billion.” Iran and Russia signed preliminary agreements for up to US$30 billion in investments in Iran’s oil industry months before the Trump administration said it would re-impose sanctions.

Europe’s ability and willingness to play its part in salvaging the nuclear deal was called into question by the new German financial rules and could depend on whether the Brussels-based Society for Worldwide Interbank Financial Telecommunication (SWIFT) bows to US threats if it fails to exclude by November Iranian banks from its global financial transfer system.

European officials suggest that a SWIFT concurrence with US sanctions would put to bed any hope of salvaging the nuclear deal. Europe appears, however, to be banking on the fact that the US may not follow through on its threats, at least not against the society as such, because that would undermine the global financial system that empowers it.

Read more: Iran volatile on eve of US sanctions

However, the new German central bank rules that create additional powers to block transactions if their execution could threaten “to end important relationships with central banks and financial institutions of third countries” appear to constitute a nod towards the US sanctions.

Coming into effect on August 25, the rules could allow the bank to reject an Iranian request that it authorize the withdrawal of U$S300 million from the Europäisch-Iranische Handelsbank AG, a Hamburg-based financial institution owned by Iranian banks, including state-owned Bank of Industry and Mine. Iran wants to physically ship the money to Tehran to evade potential US efforts to block a transfer.

Including by supporting militarily the Iranian-backed regime of Syrian president Bashar al-Assad in its quest to gain control of Syria’s last major rebel stronghold in the northern region of Idlib.

Iranian officials told the German government that the foreign currency was needed to enable Iranians who travel abroad but don’t have acceptable credit cards because of sanctions to be able to pay their travel expenses.

US and Israeli officials pressured Germany to block the withdrawal, arguing that Iran might use the funds to finance operations in Syria, Yemen, Iraq or Afghanistan. Said controversial US ambassador to Germany Richard A. Grenell: “We are very concerned about the reports that the Iranian regime is trying to move hundreds of millions of euros to Iran from a German bank.”

Read more: Iran lodges complaint against US over renewed sanctions

It’s a concern Germany seemingly shares. A German decision to block the transfer of the funds would, however, influence Iranian perceptions of Europe’s resolve. That, in turn, would focus attention on Iran’s major trading partners. China and Russia have been relatively clear where they stand while the UAE may find it more difficult to evade measures that would severely curb what has long been a lucrative business.

An oped in the Khaleej Times, the UAE’s oldest English-language newspaper that was co-founded the UAE government, published days before the US withdrawal from the nuclear agreement argued nonetheless that the UAE would gain whether or not sanctions were re-imposed. “The UAE could gain from sanctions because it has previously served as a valuable intermediary during similar periods. Goods that could not be sold to Iran directly due to sanctions were routed through the UAE,” the oped said.

Pakistan issues visa on arrival to tourists from ‘friendly’ countries

US seeks ‘reset’ in ties with Pakistan