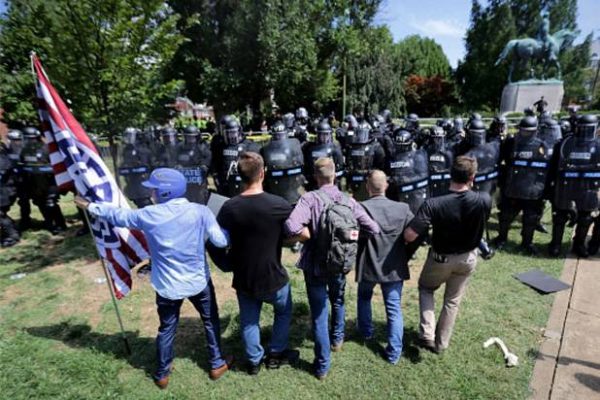 Amidst all the furor over President Trump’s suggestion that “both sides” are to blame for the recent violence in Charlottesville, I wish to weigh in on what I hold is a major contributing factor to the Charlottesville mayhem, including the killing of 32-year-old Heather Heyer: the U.S. government’s death machine, which has been killing millions of people in foreign lands for more than 50 years.

A caveat: I am not a psychiatrist or psychologist and have not had any training in either field. My theory is precisely that — a theory. But I am convinced that it is valid and, therefore, I wish to “put it out there” for consideration.

I continue to believe that a prerequisite to restoring a healthy and functional society to our land lies in stopping the U.S. death machine from killing even one more person

As longtime readers of my blog know, this is not the first time I have set forth this thesis. I have set it forth before in the wake of bizarre acts of violence committed here in the United States.

1990-2003. Hundreds of thousands of Iraqis killed in the Persian Gulf War and the ensuing 11 years of sanctions, whose very purpose was to kill Iraqi citizens in the hopes that they would oust the Saddam Hussein regime and install a pro-U.S. regime in its stead.

2002 to date. Millions of Iraqis, Afghanis, Yemenis, Libyans, and Syrians killed, injured, maimed, tortured, abused, or had their homes or businesses destroyed. Millions more forced to flee for their lives in one of the biggest refugee crises in our time.

Okay, granted, it’s not 6 million deaths, which has been the standard for numbers killed ever since World War II. Nonetheless, even two or three millions of dead, maimed, and exiled people is not a small number.

All at the hands of the U.S. military and the CIA, who many Americans continued to extol, praise, and thank throughout the massive death and destruction.

Through it all, American interventionists have lived the life of the lie. “Thank you for protecting our rights and liberties here at home by killing all those people over there” has been the standard line. But it’s been a lie from the get-go. The death and destruction never had anything to do with protecting our rights and freedoms because no one over there was ever threatening our lives and freedoms. It has always been about interventionism and regime change.

Read more: Will Trump continue the CIA’s cover-up in the JFK assassination?

Blowback from the death and destruction that the U.S. death machine had wreaked prior to that time, including the hundreds of thousands of (innocent) Iraqi children who were killed by the U.S. sanctions prior to that date.

Throughout the death and destruction, the official attitude has always been: “We are the experts. We know what’s best. We understand national security. Just leave us alone as we wreak death and destruction. We will protect you. We will make sure you don’t see photographs of the people we are killing. We will go after and punish anyone who dares to show you any such photographs. We will keep you safe and secure. Just leave us alone to do what we think is necessary.”

Keep in mind that neither war was in “self-defense” but nothing instead foreign interventions designed to extend the power and influence of the U.S. Empire

Throughout all the death and destruction, the attitude has been that as long as the deaths and destruction are “over there” the psychological impact on Americans would be minimal. The U.S. mainstream press, which often times can be confused as house organs for the Pentagon and the CIA, has done its part in the mayhem by not posting photographs of the foreign dead. In that way, they all felt that they could “protect” Americans psychologically and spiritually from being exposed to the horrific consequences of the U.S. death machine’s violence.

That’s the assumption I question. I maintain that all that death and destruction over there at the hands of the U.S. death machine has inevitably seeped into the subconscious of every American citizen and into every fiber of his being. The consequence is that it has turned Americans into an uncivil, intolerant people, often times ready to lash out at others in irrational ways and for irrational reasons.

In every society, there are inevitably going to be the people who are a bit off. As long as the overall society is functional and healthy, however, those people live their lives fairly normally. They may be a bit odd, but people generally don’t pay them much mind.

Throughout the death and destruction, the mindset has always been that American lives are more valuable than the lives of foreigners

The urge toward violence in many of the oddballs is right beneath the surface. In ordinary times, it might never surface. When society is unhealthy and dysfunctional, however, the veneer of civility and normality within many of those odd people gets shaved off and triggers acts of irrational violence.

Read more: The only solution to america’s healthcare woes

I hold that that what’s the U.S. government’s death machine for the past 25 years has done. Not only has it introduced a lack of civility and intolerance among regular people, it has also “set off” many of the oddballs.

Look at what happened in Charlottesville. A young woman’s life snuffed out. Her family’s life irreparably changed. Several people injured.

Moreover, a 20-year-old man is now going to live the rest of his life in a state penitentiary. I can only imagine him over the next 50 years sitting in his jail cell asking himself, “Was it really worth it for me to destroy my life by killing that woman?”

And for what? All over a dispute about a statute pertaining to a war that took place more than 150 years ago.

That might make sense to some people, but it appears to me to be very, very bizarre. Irrational death, injury, and ruination of lives.

Throughout the U.S. death machine’s campaign of death and destruction over there, American ministers have exhorted their congregations to “pray for the troops” who are “protecting our lives and freedoms” here at home by killing countless people over there,” thereby introducing the life of the lie in church.

The consequence is that it has turned Americans into an uncivil, intolerant people, often times ready to lash out at others in irrational ways and for irrational reasons

How many of those ministers have ever asked their parishioners to pray for the people whose lives are being snuffed out by the U.S. death machine, including all those people in wedding parties whose lives have been snuffed out by U.S. forces? I’d venture to say very few. Throughout the death and destruction, the mindset has always been that American lives are more valuable than the lives of foreigners.

That mindset was reflected early on in the U.S. government’s war of aggression against Iraq and the subsequent brutal and deadly occupation of the country—perversely called “Operation Iraqi Freedom”– during with the Pentagon and the CIA refused to keep count of the Iraqi dead. That’s because the lives of Iraqis just didn’t count.

Ever since World War II, the official mindset, as promoted by the Pentagon and the CIA, has been that life over there is not as sacred as American life. Remember: They carpet-bombed North Korea, killing and injuring millions of people because of the populace, they said, consisted of nothing but “commies, Reds, and gooks.” It was the same in Vietnam.

Keep in mind that neither war was in “self-defense” but nothing instead foreign interventions designed to extend the power and influence of the U.S. Empire. And all illegal, given no congressional declaration of war, as the U.S. Constitution requires.

Consider the mindset toward Korea today. President Trump has his national-security establishment “locked and loaded” and prepared to bring “flame and fury” by unleashing Hiroshima and Nagasaki all across North Korea.

Who cares? As long as the war doesn’t come over here, what’s the big deal with nuking or just carpet-bombing again a bunch of “commies, Reds, and gooks”? Of course, it doesn’t even occur to Trump, the Pentagon, and the CIA that they and their obsession with interventionism, empire, and regime change is the root of the problem in Korea and other parts of the world.

The U.S. mainstream press, which often times can be confused as house organs for the Pentagon and the CIA, has done its part in the mayhem by not posting photographs of the foreign dead

Ordinary Americans might be able to distinguish between the value of American life and foreign life. But the oddball might not have that capability. When the U.S. government shows no regard for the sanctity of human life over there, the oddball might well translate that into a lack of concern for the sanctity of human life over here. That is, in his mind killing an American for an irrational reason is no different from killing a “commie, Red, or gook” over there.

In fact, it doesn’t surprise me at all that the Grand Dragon of the Loyal White Knights of the Ku Klux Klan purportedly stated in regard to the Charlottesville mayhem, according to the Charlotte Observer, “I’m sorta glad that the people got hit and I’m glad that girl died. They were a bunch of Communists….”

Yeah, just like those people in North Korea. And Vietnam. And Chile. And Guatemala. And Cuba. And Operation Condor. And Charles Horman and Frank Teruggi. And Orlando Letelier and Ronni Moffitt. And Nicaragua and the Contras. And so many other people and places. All just a bunch of “commies, Reds, and gooks.” No big deal to kill any of them.

Like I say, I’m no psychiatrist or psychologist. But I continue to believe that a prerequisite to restoring a healthy and functional society to our land lies in stopping the U.S. death machine from killing even one more person, in immediately bringing all the troops home from everywhere and discharging them, in closing and abandoning all the foreign military bases, in stopping all foreign aid to dictators and other foreign regimes, and in reconverting the federal government from a national-security state to the limited-government republic the Framers bequeathed to us.

Previous articleNo cherry picking of law breakers
Next articlePakistan at 70

How Would Have Sushma Swaraj Taken Her Position At UNGA Without “Uri Attack”?