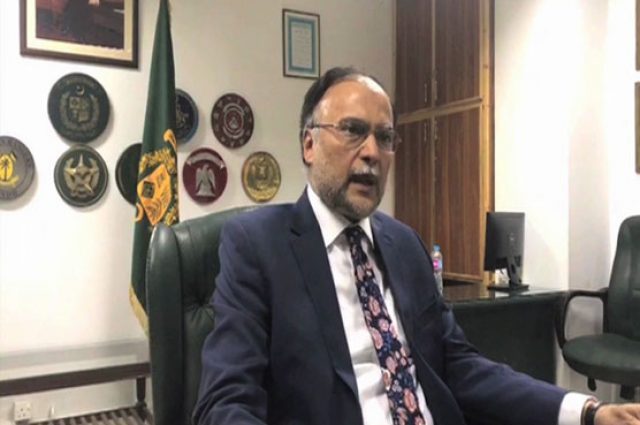 Senior Pakistan Muslim League-Nawaz (PML-N) leader and former Interior Minister Chaudhry Nisar rebuked the government for failing to place the name of former premier Nawaz Sharif on the Exit Control List (ECL) despite National Accountability Bureau’s (NAB) recommendations. The issue was raised by Pakistan People’s Party’s (PPP) leader Syed Naveed Qamar in the National Assembly on Friday who demanded an explanation from the Interior Ministry for not placing Sharif’s name on the no-fly list.

Nisar assailed the interior ministry of ignoring NAB’s orders. He informed the assembly that during his tenure, he reshaped the ECL policy and formed a committee to review whether a person’s name should be placed on the ECL or not. “NAB’s decisions used to be taken seriously during my tenure. Now if the recommendations of NAB have been ignored, then it has not been decided by the committee but it has come from elsewhere,” Chaudhry Nisar stated.

Any outsider is met with a united opposition from the Sharif family but a senior leader like Nisar is not expected to take the beating silently. It is speculated that either he’ll attempt to take over the party or leave it.

The incumbent Interior Minister Ahsan Iqbal responded in kind on Saturday by accusing Nisar of adopting an illegal mechanism to place names of people on the ECL. While talking to reporters, he explained that the approval of Cabinet is a must now for placement of name on the ECL. The names of former premier Nawaz Sharif, his children, Senator Ishaq Dar and 600 others were sent to the cabinet for approval by the interior ministry.

Read more: “Will a resolution be passed against the SC,” asks Chief Justice…

“Chaudhry Nisar should know that the interior ministry makes its own decision. Neither we take dictation from anyone nor act according to our will but according to the law,” Ahsan struck at his predecessor. This is not the first time that the former and serving interior ministers of PML-N have clashed with each other. On 25th January, the two argued and blamed each other for the change in visa policy. Ahsan Iqbal appears to be overturning all of Nisar’s decisions as the Interior Minister.

The National Accountability Bureau (NAB) on 14th February requested the Interior Ministry to place the name of former premier Nawaz Sharif, his daughter Maryam Nawaz and his son-in-law Capt (Retd) Safdar on the Exit Control List (ECL) due to fears that they might attempt to flee the country. The decision came in the light of Nawaz and Maryam’s request to be exempted from the hearings of a graft case against them in the Accountability Court.

Nisar announced that he will not work under her leadership. He further claimed that he is not afraid of dissenting with the leadership if he doesn’t agree with their opinion.

The interior ministry refused to place the name of the Sharif family on the ECL on 20th February and demanded evidence from NAB against them. The Interior Minister Ahsan Iqbal further stated that ECL should not be used a political instrument. Being a minister of the PML-N government, it is naturally hard for Iqbal to rebel against the founder of his party. The views of Chaudhry Nisar give us further insight into the ECL process.

In a number of cases, the names of suspects were immediately placed immediately on the ECL. In the case of PPP leader Sharjeel Memon, the Interior Ministry didn’t wait for the approval of cabinet to place his name on the ECL. The same goes for former SSP Rao Anwar who is the prime accused in the Naqeebullah murder case. Media experts believe that the issue of review by cabinet is only being used as a delaying tactic so that the Interior Minister wouldn’t have to move against his ‘Quaid’.

This is not the first time that senior PML-N leader Chaudhry Nisar has spoken against the party. He previously declared that the heir apparent of PML-N Maryam Nawaz is not fit to be the leader of the party since she’s a junior. Nisar announced that he will not work under her leadership. He further claimed that he is not afraid of dissenting with the leadership if he doesn’t agree with their opinion.

According to many political analysts, Nisar is being sidelined by the senior leadership. His rifts with Ahsan Iqbal and Pervez Rasheed point towards that direction. They believe that due to Nisar’s seniority, he is seen as a threat by the Sharif family which operates under the monarchial and kinship model rather than democracy. Any outsider is met with a united opposition from the Sharif family but a senior leader like Nisar is not expected to take the beating silently. It is speculated that either he’ll attempt to take over the party or leave it.

Efforts will continue to maintain normalcy in Karachi and the province: COAS

Al-Azizia corruption reference: Nawaz trying to save a sinking ship?