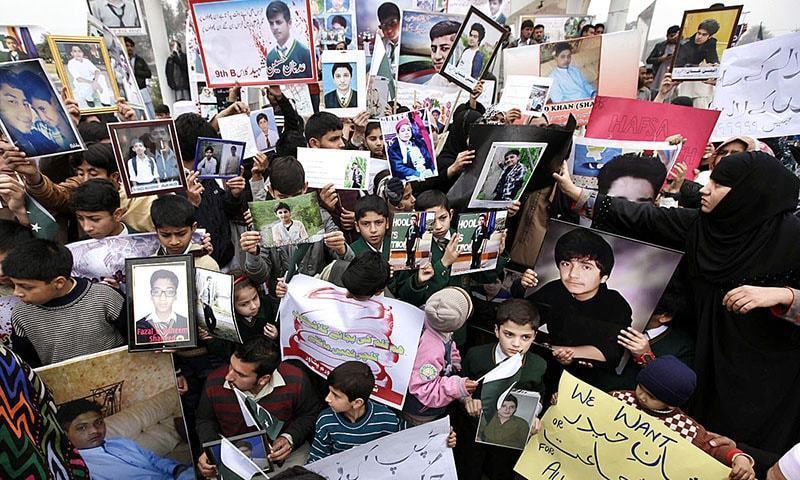 The top judge directed Yahya Afridi, the Chief Justice of Peshawar High Court, to form the judicial commission comprising three judges, and produce a comprehensive report on the matter within two months.

The directives were issued when the Chief Justice was hearing a Suo Motu case in the Supreme Court’s Peshawar registry.

The Suo Motu was taken on the Peshawar High Court’s decision to dispose of a writ petition seeking the formation of a judicial commission over APS carnage.

In its decision announced in February, the Peshawar High Court had announced that it was the government’s mandate to initiate such an inquiry, though the petitioner argued that a judicial inquiry was a fundamental right of APS victims’ parents.

It was an emotional day, at the hearing of the case today, where the aggrieved parents expressed their anger at the verdict of the chief justice of the Peshawar High Court.

At one point in time, when the petitioners continued lashing out at the Peshawar High Court chief justice, the top judge instructed Fazal Khan, the counsel for the petitioners – who is also the father of a kid martyred in 2014 incident – to leave the room.

A two-member bench of the provincial high court, comprising Chief Justice Yahya Afridi and Justice Afsar Shah, had disposed off a petition seeking a judicial commission to probe the carnage.

However, it ensured the petitioners that the said request will be forwarded to the government.

The ruling came in line with ‘The Commissions of Inquiry Act-1956’ which gives privilege to the provincial or the federal government to form a judicial commission.

Moreover, the Peshawar High Court directed to make the police report on the incident, public.

The prominence of Judicial Commission

The judicial commission, which has now been asked to constitute by the Chief Justice of Pakistan, is set to unveil different aspects of the carnage, which shook the country, four years back.

Firstly, the top judge of the country has personally ordered the formation of a commission and directed his subordinate to carry out thorough investigations.

Secondly, the top judge would be keeping an eye on the investigations which is a visible distinction.

Thirdly, the timing of the decision is important as the Khyber Pakhtunkhwa government led by Pakistan Tehreek-e-Insaf is about to complete its tenure, with the forthcoming elections, just around the corner.

If it takes one or two weeks to form the commission, then the commission would present its report in July, when the caretaker set-up would have assumed offices, virtually eliminating apprehensions of any political influence.

Moreover, the Supreme Court had stayed the execution of three facilitators of APS attack in 2016 – Mohammad Zubair, Ali Rehman, and Taj Mohammad.

The said accomplices can be investigated again by the commission to unearth the truth behind APS tragedy.

Although the APS attackers were hanged weeks after the carnage, by the military courts, the law enforcers must have a plenty of information and record which can be scrutinized again, by the judicial commission.

The Army Public School attack was the most horrible terrorist attack on the Pakistani soil after the initiation of Global War on Terror (GWOT).

On December 16th, 2014, armed terrorists stormed the school and gunned down over 132 kids and several other staff members.

The incident sent shockwaves across the country and the civil-military leaders discussed, for long hours, the strategy to weed out terrorism, in letter and spirit.

Although the armed forces have been battling the scourge of terrorism since 2001, the APS tragedy prompted the law enforcers to tackle the menace in a more strategic way.

Soon after the rampage, Pak Army intensified its Operation Zarb-e-Azb and achieved successes.

In a recent interview, Major Asif Ghafoor, the Director-General of Inter-Services Public Relations, revealed that Pakistan had rid its soil of all terrorist sanctuaries through a well-thought-out military campaign. Besides Zarb-e-Azb, Operation Khyber IV and Rad ul Fassad were also launched in a bid to secure the citizens.

Moreover, a National Action Plan (NAP) with 20 points was also chalked out. Pakistan also started fencing border with Afghanistan, the first phase of which has been inaugurated by General Qamar Javed Bajwa, the incumbent military head.

The findings of the judicial commission would further help the law enforcers, devise a robust strategy, not to let any APS like tragedy, happen again.

Previous articleInquiry launched against Shujaat Azeem over PIA losses but there’s more to the chaos
Next article“We will always fight those who seek Azadi,” Indian Army Chief warns Kashmiris

19 June 2021
Previous articleInquiry launched against Shujaat Azeem over PIA losses but there’s more to the chaos
Next article“We will always fight those who seek Azadi,” Indian Army Chief warns Kashmiris

Tornado kills at least 23 in US state of Alabama: officials

Shehbaz to rule Pakistan next: Musharraf