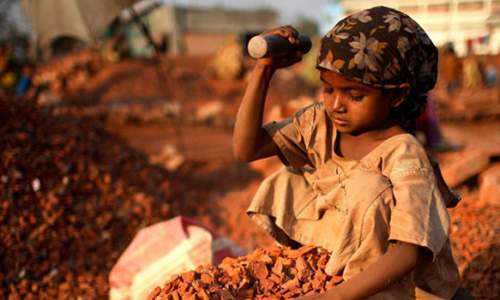 In Pakistan, a country where almost half of the population lives below the poverty line, child labor is a deeply entrenched and pressing phenomenon. Child labor in Pakistan is prevalent in all sectors of the economy, though it primarily exists in the informal sector of employment and home-based industry. Pakistan’s high population growth of around 1.6% poses multiple challenges and threatens to constrain limited resources and social and economic development of the country.

According to the survey of Federal Bureau of Statistics (FBS) in 2002, the number of working children in Pakistan was approximately 3.5 million or 7% of the total workforce in Pakistan. However, the children under the age of 10 and those working in small and family businesses that are not registered with the government were not the part of the survey. So the actual figure is deemed to be much higher than the official figures.

In Pakistan, children aged 5-14 are around 40 million. The survey conducted by UNICEF in 2003, estimated that 8 million children under the age of 14 are engaged as labors. Most of them are engaged as labors in brick kiln factories, carpet weaving centers, agriculture, small industries, and domestic services. The survey also indicated that rural and urban ratio of child labors was 7:1. The province with the most number of cases of child labor was Punjab with nearly 60% of the total child labor population.

Poverty levels in Pakistan appear to necessitate that children work in order to allow the families to reach their target take-home pay. The lack of economic opportunity for adult employment in Pakistan needs to be studied and taken into consideration; the government also needs the strict implementation of laws made by it. Lack of education is another reason for the high rate of child labor in Pakistan.

Thought government of Pakistan has made policies for providing free elementary education to children, the policies need a strict implementation to address the issue. Also, other stakeholders of the issue especially Child Parliament, ILO, UNICEF, Media and NGO’s have to work in tandem to create awareness for the rights of the children in the country.

Dams: A current political issue – Letter to the Editor