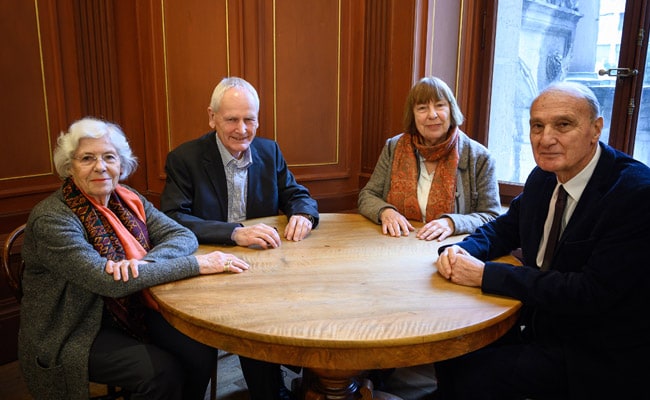 The moment may sound familiar to many; a family gathered around a kitchen table after the death of a parent, taking stock of the life that has ended. But for Germany’s Ulrich Gantz, the scene following his father’s 2002 death came with further exceptional pain on the table were two bags filled with documents showing his father had served in the Nazi paramilitary death squad, the Einsatzgruppen, during World War II.

He had previously pressed his father, Helmut, about his wartime experience but never obtained the information he had sought. “‘All the answers you have been seeking about your father are here,'” Gantz recalled his stepmother saying, as she handed over the files that also linked Helmut to the execution of tens of thousands of people in Belarus in the early 1940s. His participation has never been established in court.

For Gaussot, participating in the CICAD event appeared to provoke less emotional turmoil, given that he was telling the story of a father’s heroism, not unveiling a family disgrace.

Gantz, a retired chemical engineer now in his early 70s, grew emotional as he recounted that day at an event hosted by a museum in the western Swiss city of Lausanne last week. Ahead of Holocaust Remembrance Day on Sunday, Gantz was joined onstage by compatriot Barbara Brix, whose father also served in the Einsatzgruppen, which played a central role in the Final Solution.

In front of an audience of mostly secondary school students, other speakers included Jean Michel Gaussot and Yvonne Cossu, whose fathers were killed by the Nazis for being members of the French Resistance. The event was one in a series organized by the Swiss-based civil society organization CICAD, which works to combat anti-Semitism.

Where is the Red Line?

The testimonials are part of a broader effort to combat the anti-historical propaganda and “disgusting ideologies” that have allowed Holocaust denial to persist, CICAD’s secretary general Johanne Gurfinkiel told AFP. “We hear them talking. They continue to say the story doesn’t exist, that the gas chambers were invented,” Gurfinkiel said. “There is a need to recall historical facts.”

For Gantz, the emotional burden of talking about his father’s Nazi past was not the only obstacle he had to overcome before teaming up with CICAD. He said he also had to break a promise made to his brother that the suspicions about his father would never be made public. His brother had wanted to burn the documents connecting their father to the executions, said Gantz, who spent his career in Germany as well as in the United States and the Netherlands.

“This is a question that I ask myself and that I think everyone here needs to face… where is the red line?” he asked. “When do I say what needs to be said?” After the war, prosecutors said they did not have enough evidence to convict Helmut Gantz over the executions, according to CICAD and Gantz.

The former French diplomat has said that the joint appearance onstage of the descendants of Nazis and the children of their victims helps reinforce the importance of giving an honest account of history, regardless of a family’s personal story.

Brix, who is in her late 70s and had a long career as a high school teacher, said she had always imagined her father using his skills as a doctor during the war to care for wounded soldiers before she learned the extent of his actual role.

“When I finally learned who he was, that he was a member of the Einsatzgruppen, I asked myself a lot of questions and I continue to ask myself one question in particular: what would I have done?”

Frenchman Jean Michel Gaussot never knew his father, who was interned by the Nazis at the Neuengamme concentration camp in 1944 and died the following year. For Gaussot, participating in the CICAD event appeared to provoke less emotional turmoil, given that he was telling the story of a father’s heroism, not unveiling a family disgrace.

The former French diplomat has said that the joint appearance onstage of the descendants of Nazis and the children of their victims helps reinforce the importance of giving an honest account of history, regardless of a family’s personal story. “There is real cooperation between us because we share the same values with our two German friends,” he said.

Deal, no deal or no Brexit? The Brexiteers’ dilemma