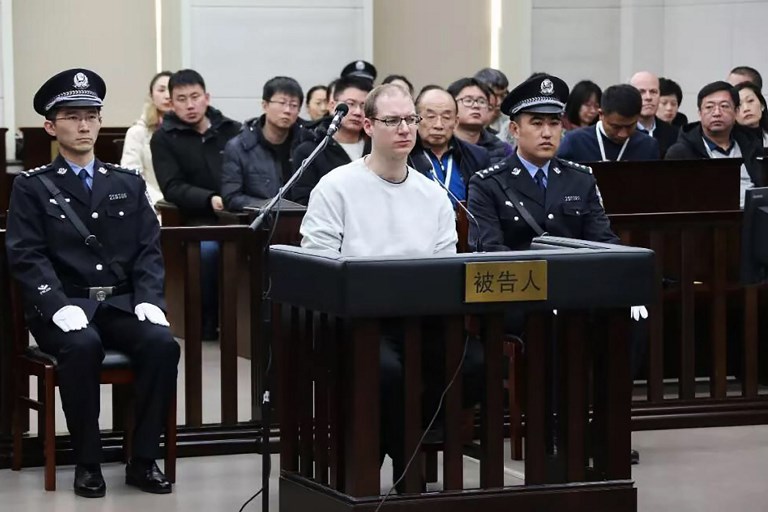 A diplomatic spat between Beijing and Ottawa intensified on Tuesday as Canada warned its citizens of the risk of “arbitrary enforcement” of laws in China after a Canadian drug suspect was sentenced to death. The Canadian government updated its travel advice hours after a court in northeast China sentenced Robert Lloyd Schellenberg, 36, to death at a retrial after his previous 15-year prison term was deemed too lenient.

The punishment was handed down amid a clash between Ottawa and Beijing over Canada’s arrest of a top executive from telecom giant Huawei last month on a US extradition request related to Iran sanctions violations. In a move observers see as retaliation over the Huawei case, Chinese authorities detained two other Canadian citizens — a former diplomat and a business consultant — on suspicion of endangering national security.

The fate of the other two Canadians, who have been held in undisclosed locations, remains a mystery.

Schellenberg was detained well before the diplomatic feud, back in 2014. He was originally sentenced to 15 years in prison and a 150,000-yuan ($22,000) forfeiture in November.  But in December, following an appeal, a high court in Liaoning ruled that the sentence did not fit the severity of his crimes and ordered a new trial.

The court in Dalian on Monday found Schellenberg guilty of being the main suspect in a case involving an international syndicate that planned to send some 222 kilogrammes (490 pounds) of methamphetamine to Australia. He can appeal the ruling. Canadian Prime Minister Justin Trudeau expressed “extreme concern” that China had “chosen to arbitrarily” apply the death penalty.

The Canadian government then issued a new travel advisory urging citizens to “exercise a high degree of caution in China due to the risk of arbitrary enforcement of local laws.”

China executes one or two foreigners every year — nearly all for drug offences, according to John Kamm, director of the US-based Dui Hua Foundation rights group. But the timing of Schellenberg’s sentence raised suspicion among observers that China seized on the case to pressure Canada over the Huawei arrest.

Chinese authorities detained two other Canadian citizens — a former diplomat and a business consultant — on suspicion of endangering national security.

Experts said retrials are rare in China, especially ones calling for a harsher sentence, but rights groups noted that courts are not independent and can be influenced by the Communist Party.

“Many factors in, in this case,ise serious questions of concern: particularly, that the retrial was rushed through so quickly and that state-run media drew such deliberate attention to the case,” William Nee, China researcher at Amnesty International, told AFP.

“Most likely, China wants to send a tough message to Canada,” Nee added. The Chinese foreign ministry has vehemently denied that the case was politicised. The fate of the other two Canadians, who have been held in undisclosed locations, remains a mystery.

The Chinese foreign ministry rejected Trudeau’s assertion that Kovrig, who now works for the International Crisis Group, still enjoyed diplomatic immunity. Meng, meanwhile, was granted bail by a Canadian court, allowing her to wait for the US extradition hearing in a Vancouver house.