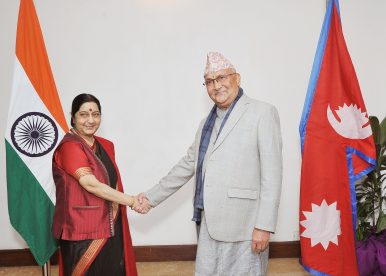 In an unexpected development last week, the Nepalese government decided to cancel plans to build the US$2.5 billion 1,200-MW Budhi Gandaki hydropower project. The decision taken at a cabinet meeting in Kathmandu was tweeted in real time by Nepal’s Deputy Prime Minister Kamal Thapa, who is apparently a follower of Donald Trump. The seductive part of the story was that a Chinese company Gezhouba Group Corp (CGGC) would have built the dam.

Independent western reports mentioned that the reason advanced by the Nepalese government for the cancellation of the project was that there were “irregularities” insofar CGGC was selected without initiating a competitive bidding process, in breach of Nepal’s Public Procurement Act. Thapa probably strained to inject the whiff of a political scam. (The decision on Budhi Gandaki was taken by ‘Maoist’ leader Prachanda as the then prime minister.)

The strong likelihood is that the cancellation of the Budhi Gandaki project forms part of the fratricidal strife in Nepali politics involving the Nepali Congress-led alliance and the united front of communist parties.

The cancellation of the Budhi Gandaki was no big deal. According to the authoritative Hydroworld, which closely monitors dam construction activities worldwide, “CGGC was to build the plant under an engineering, procurement, construction, and finance model. But, the parties had yet to sign a memorandum of understanding and other regulatory agreements before the award was made official.”

In the estimation of Hydroworld, “The World Bank estimates Nepal needs to invest about 3% of GDP annually in order to enhance external connectivity and through the BRI, Nepal expects its infrastructure gap to be better addressed… There is no immediate word (from Kathmandu) if or when building the project could be re-negotiated with CGGC or another developer. After commissioning, the Budhi Gandaki plant would have been Nepal’s largest capacity project…

“After today’s announcement, the focus could become greater on finishing the ongoing efforts the government is making related to hydropower. Nepal continues trying to solve issues related to electrifying the country, utilizing money already obtained.” Simply put, the likelihood is that Budhi Gandaki project will be revived at some point by the next government.

The Chinese company will also be operating the project for some years. Suffice to say, a sizeable Chinese ‘presence’ is getting established for the next several years to come in a highly sensitive cross-border infiltration.

Unsurprisingly, the news made big headlines in the Indian media. China’s woes are always a matter of infinite bliss for our chaps in Delhi. That is rather surprising, though, for a Hindu nation – and that too, about another Hindu nation. (I read only recently in Swami Chinmayananda’s discourses, ‘Be openly happy in the joy of others; be sincerely sympathetic in others’ sorrows.’)

Some papers rushed to celebrate. The Times of India even cited “unconfirmed reports” to the effect that the Budhi Gandaki project “might go to India’s NHPC instead.” The paper dramatized that Nepal’s decision “could have far-reaching consequences in the region and for China.”

Schadenfreude? Sinophobia? There are no easy answers.

But then, two days back on Monday, Nepal signed a deal for another major hydropower project with a Chinese firm – none other than the Leviathan known as China Three Gorges Corporation (CTGC). In fact, a China-Nepal joint venture has been formed between the government agency Nepal Electricity Authority and the CTGC for the construction of the $1.8 billion hydropower project, where the latter holds a commanding 75 percent stake.

Read more: Will India accept a communist government in Nepal?

Indeed, the mother of all ironies concerns the site of the project (known as the West Seti hydropower project) – virtually straddling Nepal’s border with Uttarakhand not too far from the disputed India-China-Nepal tri-junction known as Kalapani (which was in the limelight during the Doklam standoff) in the far western Nepalese districts of Baitadi, Bajhang, Dadeldhura and Doti bordering India – a bucolic hilly region dotted with Hindu temples, which is not very far from Kailas, the abode of Lord Shiva.

In fact, a China-Nepal joint venture has been formed between the government agency Nepal Electricity Authority and the CTGC for the construction of the $1.8 billion hydropower project, where the latter holds a commanding 75 percent stake.

The CTGC will be undertaking the construction of the project through a period of 6-7 years. It is a major project for Nepal, which is expected to produce 750 MW of power. (Currently, Nepal’s installed hydropower capacity adds up to only 753 MW.) The Chinese company will also be operating the project for some years. Suffice to say, a sizeable Chinese ‘presence’ is getting established for the next several years to come in a highly sensitive cross-border infiltration route for militants sneaking into Tibet to undertake subversive activities!

All things taken into account, to my mind, the strong likelihood is that the cancellation of the Budhi Gandaki project forms part of the fratricidal strife in Nepali politics involving the Nepali Congress-led alliance and the united front of communist parties in the run-up to the legislative elections (to be held in two phases on November 26 and December 7) in which the communists were initially credited with having an upper hand but is increasingly turning out to be a do-or-die battle for power.

Read more: Is India cutting ‘off its nose to spite its face’ on…

Deputy Prime Minister Thapa in the Nepali Congress-led government (who rushed to tweet the cabinet decision in Kathmandu on Budh Gandaki) also happens to be the president of Nepal’s royalist party Rashtriya Prajatantra Party, which of course is very close to our Sangh Parivar folks who mentor our government. Got it?

After all, all this Budh Gandaki scandal could well be a cozy little ‘family matter’ for the late autumn before winter sets in. Read a piece in the Sunday Guardian on the elections in Nepal – Anti-India Left parties align for Nepal votes, here.