China tests its own ‘Mother of All Bombs’ 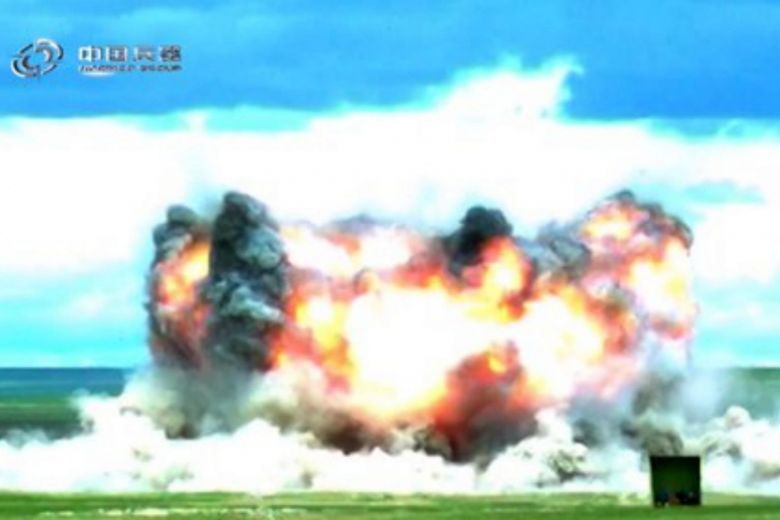 China has tested its most powerful non-nuclear weapon, dubbed the “Mother of All Bombs” by official media in a reference to a US munition used in Afghanistan.

In a short video published on the website of state arms manufacturer Norinco, the massive bomb drops on to a plain and produces a gigantic ball of fire and black smoke.

On social networks Wednesday, the official Xinhua news agency described the bomb for the first time, calling it the “Chinese version of the ‘Mother of all Bombs’”.

US president Donald Trump said at the time he was “proud” of his troops and congratulated them on their success.

The bomb — whose strength is only second to that of a nuclear weapon, according to the agency — was dropped by a Chinese H-6K bomber. No details on the date, location or range of the bomb blast were provided.

In 2017 the US dropped the most powerful conventional bomb in its arsenal, dubbed the “MOAB” — the “Mother of All Bombs” — in an attempt to destroy a tunnel network being used by the Islamic State (IS) group in the east of Afghanistan.

US president Donald Trump said at the time he was “proud” of his troops and congratulated them on their success.

Read more: Mother of All Bombs: nothing more than a mere theatrical act…

The Chinese bomb is five to six meters long (16 to 20 feet), but weighs less than the American version, according to military analyst Wei Dongxu, who was quoted by the semi-official Global Times daily on Friday.

“The massive explosion that was generated would easily wipe out land fortifications,” said Wei.

Previous articleUK universities would take ‘decades’ to recover from no-deal Brexit, leaders warn
Next articleWorld is safe from global conflict in 2019

17 September 2021
Previous articleUK universities would take ‘decades’ to recover from no-deal Brexit, leaders warn
Next articleWorld is safe from global conflict in 2019

‘Fire and Fury’: Excerpts from tell-all book on Trump

30% increase in US Troops to Afghanistan