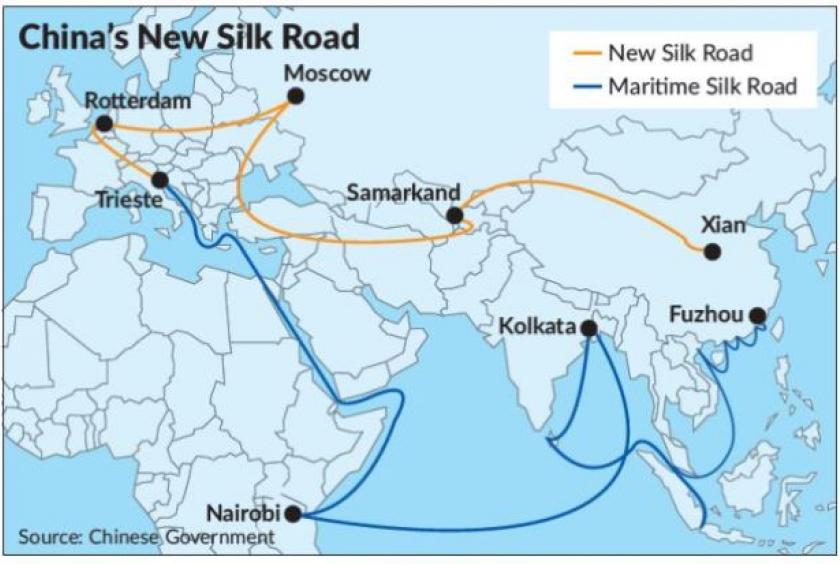 A Chinese decision to redevelop criteria for the funding of infrastructure projects that are part of the $50 billion plus China Pakistan Economic Corridor (CPEC), a key pillar of the People’s Republic’s Belt and Road Initiative, seemingly amounts to an effort to enhance the Pakistani military’s stake in the country’s economy at a time that the armed forces are flexing their political muscle.

The Chinese decision that has reportedly led to the suspension of funding for three major road projects valued at a total of $850 million – the upgrading of the Dera Ismail Khan-Zhob motorway and the Karakorum highway as well as construction of a 110-kilometre road linking Khuzdar and Basima – suggests that Beijing is not averse to exploiting its massive investment in the Belt and Road, an effort to link Eurasian infrastructure to China, to shape the political environment in key countries in its authoritarian mould.

A report by the Pakistani Senate, that has repeatedly criticized CPEC’s lack of transparency and Chinese commercial policies, concluded that China would for the next four decades get 91 percent of the revenues generated by the port of Gwadar.

Pakistan’s use of militants in its dispute with India over Kashmir serves Chinese interest in keeping Asia’s other giant, India, off balance. Chinese personnel and assets have nonetheless been targets of a low-level insurgency in Balochistan.

The suspension of funding coincided with apparent efforts by the military to increase its political sway by supporting militant and hard-line Sunni Muslim groups opposed to the ruling Pakistan Muslim League (N) headed by disgraced former prime minister Nawaz Sharif. Former Pakistani strongman General Pervez Musharraf, in the latest manifestation of links between the circles close to the military and hardliners, announced earlier this month that he was discussing an alliance with Milli Muslim League (MML).

Read more: Pakistan withdraws from Chinese dam building deal. What does this mean…

MML was recently established by Hafiz Muhammad Saeed, who was designated a terrorist by the United Nations and the US Justice Department that put a $10 million bounty on his head and stands accused of having masterminded the 2008 attacks in Mumbai in which 164 people were killed.

Mr. Saeed, the leader of Jamaat ud-Dawa (JuD), widely seen as a front for Lashkar-e-Taibe (LeT), one of the largest and most violent groups in South Asia, was last month freed by a court in Lahore from ten months of house arrest.

Speaking on Pakistani television, Mr. Musharraf pronounced himself “the greatest supporter of LeT.” Acknowledging that he had met with Mr. Saeed, Mr. Musharraf appeared to confirm long-standing suspicions that the military supported LeT as a proxy in Pakistan’s dispute with India over Kashmir.

The militants, dressed in Indian military uniforms fought a 14-hour battle against Indian security forces that only ended when the last attacker was killed. Mr. Azhar was briefly detained after the attack and has since gone underground.

Parallel to Mr. Musharraf’s endorsement of LeT, the military displayed its political influence by mediating an end to a weeks-long blockade of a main artery leading into Islamabad to protest a perceived softening of the government’s adherence to Islam in a proposed piece of legislation.

Tehreek Labbaik Pakistan (TPL), the organizer of the protest, is a political front for Tehreek Labbaik Ya Rasool Allah (TLR), which glorifies Mumtaz Qadri, who was executed for killing Punjab governor Salman Taseer because of his opposition to Pakistan’s draconic blasphemy law.

The TPL is a political expression of the Barelvi strand of Sunni Islam that throughout the decades was long viewed as more moderate than the other dominant strand in Pakistan, the Saudi-supported Deobandis, whose militancy dates to the US-Saudi-backed Islamist insurgency in the 1980s that forced Soviet troops to withdraw from Afghanistan.

Suggestions that the protesters were supported by the military  were reinforced by video circulating on social media and the negotiation of an end to the blockade that involved the forced resignation of law minister Zahid Hamid and the dropping of all charges against protesters.

Chinese support for the military’s role has long been evident with its repeated veto in the UN Security Council of US, European and Indian efforts to get Masood Azhar, a prominent Pakistani militant designated as a global terrorist. Mr. Azhar is believed to have close ties to Pakistani intelligence and the military. Prior to the Mumbai attacks, China also blocked Mr. Saeed’s designation.

TPL, the organizer of the protest, is a political front for TLR, which glorifies Mumtaz Qadri, who was executed for killing Punjab governor Salman Taseer because of his opposition to Pakistan’s draconic blasphemy law.

Mr. Azhar, a fighter in the anti-Soviet jihad in Afghanistan and an Islamic scholar who graduated from a Deobandi madrassah, Darul Uloom Islamia Binori Town in Karachi, the alma mater of numerous Pakistani militants, is believed to have been responsible for an attack last year on India’s Pathankot Air Force Station. The militants, dressed in Indian military uniforms fought a 14-hour battle against Indian security forces that only ended when the last attacker was killed. Mr. Azhar was briefly detained after the attack and has since gone underground.

Read more: CPEC: Is the sovereignty of Pakistan being compromised?

Criteria for the funding of the road projects, once redrafted, are expected to benefit the military’s engineering and construction company, Frontier Works Organization. The suspension was projected as an effort to avoid corruption in CPEC in the wake of Mr. Sharif’s ousting as prime minister after documents leaked from a Panama law firm linked his children to offshore companies and assets. Long viewed as a nemesis of the military, Mr. Sharif demise served the interests of the armed forces.

The suggestion failed to stand up to scrutiny given that some Chinese companies have been granted CPEC contracts despite allegations of corruption. In one instance, theChina Gezhouba Corporation (CGGC), was awarded the development of Pakistan’s $4.5 billion, 969 MW Neelum-Jhelum Hydropower Project, despite having been blacklisted by the World Bank.

Chinese backing for a more prominent role of the military in economic and political life comes amid increased Pakistani scrutiny of CPEC. In a rare challenging of Chinese commercial terms, Pakistan recently withdrew from a Chinese-funded dam-building project.

Pakistan’s use of militants in its dispute with India over Kashmir serves Chinese interest in keeping Asia’s other giant, India, off balance. Chinese personnel and assets have nonetheless been targets of a low-level insurgency in Balochistan.

Pakistani Water and Power Development Authority chairman Muzammil Hussain charged that “Chinese conditions for financing the Diamer-Bhasha Dam were not doable and against our interests.” China and Pakistan were also at odds over ownership of the $14 billion, 4,500 megawatts (MW)-hydropower project on the Indus River in the country’s problematic region of Gilgit-Baltistan near disputed Kashmir.

Earlier, a State Bank of Pakistan study concluded that exports of marble to China, Pakistan’s foremost rough-hewn, freshly-excavated marble export market, and the re-export to Pakistan of Pakistani semi-processed marble was “hurting Pakistan’s marble industry to a significant extent.”

A report by the Pakistani Senate, that has repeatedly criticized CPEC’s lack of transparency and Chinese commercial policies, concluded that China would for the next four decades get 91 percent of the revenues generated by the port of Gwadar.

Read more: CPEC and Pakistan’s road to development: Can India sabotage the plan?

“Beijing is keen to give the Pakistani Army the lead role in the CPEC projects as Pakistani ministries charged with carrying out the projects have incurred delays because of infighting. Concerns that the project bypasses Pakistan’s poorer regions and will mainly benefit the financially-strong province of Punjab has made politicians argue with regards to the benefits of CPEC… The Chinese are not used to such harsh disagreements,” the European Foundation for South Asian Studies (EFSAS) said in a commentary.

China condemns US for congratulating Tsai on Taiwan poll win