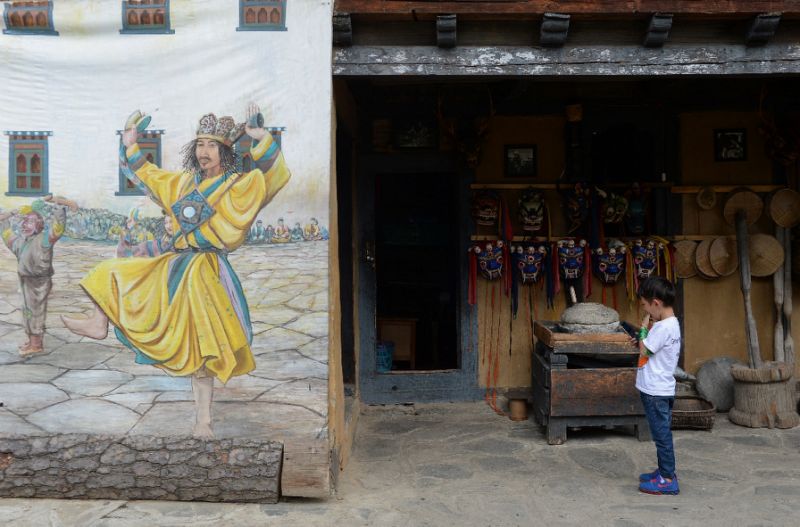 A peep into a Thimphu toy shop shows stacks of Pokemon, all made in China, a testimony to the quiet overtures Beijing is making in Bhutan at rival India’s expense. China’s annexation of Tibet in 1951 and an unresolved border dispute have long been irritants in ties with Bhutan, and India would prefer they remain estranged.

India jumped to Bhutan’s defence last year when Chinese troops started building a road on Doklam, a territory claimed by both China and Bhutan. The eyeball-to-eyeball confrontation lasted 72 days before the Indian and Chinese armies pulled back.

India has been generous with loans and grants but Bhutan could do with more investment, and China has deep pockets.

But now Beijing is seeking to mend relations and extend a hand of friendship to the tiny Himalayan kingdom, despite the two having no diplomatic relations.

Chinese shipments have shot up in the past decade, with goods from machinery and cement to electricals and toys making Beijing the third largest source of foreign products to heavily import-dependent Bhutan.

And stuck between the competing regional powers, Bhutan has been gasping to assert its sovereignty and shrug off decades of heavy dependence on India.

Many among Bhutan’s 800,000 population feel India’s embrace is becoming a stranglehold and getting in the way of Thimpu’s ties with other countries.

“Within Bhutan, there is a growing demand to diversify and loosen its dependence on India,” University of British Columbia historian Tsering Shakya said. “However, given the geography and history, it is not easy for Bhutan to ignore India’s interest.”

Nestled in the highest, snow-capped mountain range in the world, Bhutan is one of the world’s few countries to have never been colonised, and has retained much of its unique culture and charm.

China has been reaching out to Bhutan through sports, religious and cultural visits as well as scholarships to Bhutanese students.

The country’s fourth king famously introduced the concept of gross national happiness in the 1970s, shunning the usual gross domestic product used by most modern countries to measure economic growth.

Bhutan was almost as isolated as the mythical Shangri-La until the early 1960s when its first highway was built.

But it has become increasingly dependent on neighbours, as shown in 2013 when India was accused of triggering a fuel crisis by cutting subsidies on cooking gas and kerosene which some say was a punishment to Bhutan for warming up to the Chinese.

“If we (India and Bhutan) are good friends, our friendship shouldn’t be affected by our relations with other countries,” said Vimla Pradhan, a 21-year-old college student.

Read more: The Lhotshampa: The unhappy people of the world’s happiest country

“It appears as if everything Bhutan does, it should have tacit approval from India. India will always come before others but please don’t behave like a jealous big brother,” she told AFP in Thimpu.

Pradhan, who studies political science and philosophy, is not isolated in her views. Many aspiring Bhutanese are restless for new opportunities at a time when youth unemployment is 10.6 percent against the national average of 2.4 percent.

India has been generous with loans and grants but Bhutan could do with more investment, and China has deep pockets.

“Where are the jobs? Look at any nook and corner and you will find young men hanging around aimlessly,” said Karma Choden, a mother of two, as she waited for customers at a roadside stall selling dry cheese and red chillies.

Taxi driver Kinzang Dorji is unable to make much sense of Bhutan’s diplomacy and history. But he understands the value of foreign investment.

Bhutan, a growing economy which has been trying to shed its tag as one of the world’s least developed countries, is struggling to reduce unemployment as it gears up for only its third-ever election on Thursday.

The ruling party was knocked out in the first round of polling in mid-September, signalling the electorate’s desperation for change.

China’s policy of mixing soft diplomacy and economic aid has reaped rich dividends in South Asian countries where India has long held sway like Sri Lanka and the Maldives. China has been reaching out to Bhutan through sports, religious and cultural visits as well as scholarships to Bhutanese students.

Its vice foreign minister Kong Xuanyou made a rare trip to Bhutan in July. Bhutan has also been receiving a growing number of Chinese tourists, who have to pay a sizeable visa fee, unlike their Indian counterparts.

The number of Chinese tourists visiting Bhutan surged from fewer than 20 a decade ago to 6,421 in 2017, according to official figures.

Taxi driver Kinzang Dorji is unable to make much sense of Bhutan’s diplomacy and history. But he understands the value of foreign investment. “Bhutan should make friends with other countries,” Dorji said.

“Many Chinese tourists have started coming and they are bringing in a lot of money. We don’t mind them at all,” he said before zooming past a Chinese restaurant in the heart of Thimphu.