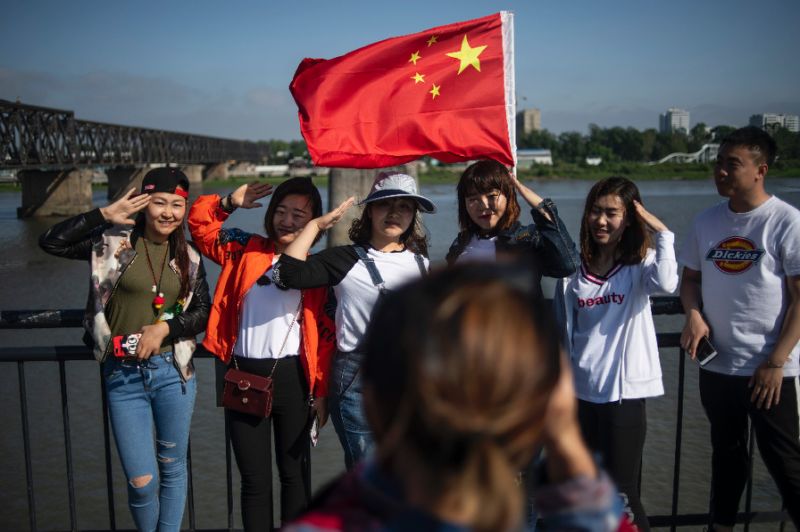 After a sanctions-driven hiatus, dozens of North Korean women are again cutting cloth, pedalling sewing machines and manning production lines at a garment factory in a Chinese city buoyed by hopes of peace across the border.

The workshop had been silent for months, whipsawed by United Nations sanctions that sent North Korean workers home, but machines have sprung back to life in the trade gateway of Dandong as tensions ease on the Korean peninsula.

Manager Tian shifted explanations when asked how she had reassembled her North Korean workforce.

Beijing, an old ally of Pyongyang, has officially shown no signs of lifting the punishing UN measures, but President Xi Jinping’s embrace of his younger North Korean counterpart, Kim Jong Un, has provided breathing room to businesses and traders in the border city.

Many businessmen are now looking ahead to the fortune they hope to make should US President Donald Trump’s summit with Kim on Tuesday in Singapore leads to the lifting of sanctions.

The city of 2.4 million bet its economy on commerce with the North, emerging as the main artery for bilateral trade trucked back and forth across the Yalu River separating the two Cold War-era allies.

But the economy has been in the doldrums since the UN punished Pyongyang for its nuclear and missile tests last year, squeezing trade in coal, seafood, textiles and other commodities while forcing a portion of its cheap North Korean workforce to return home.

“We are just doing some small business, we don’t understand the politics but we have been majorly impacted,” a manager of the garment factory surnamed Tian told AFP. Today things are looking up: curious Chinese tourists are returning, housing prices are jumping, and some traders have learned how to work around sanctions.

“Most of my buyers are businessmen from southern China. They think they will do business with the North,” said Yue Yue, a realtor selling apartments overlooking the Yalu.”We have sold a year’s worth of apartments in one month’s time,” she said.

North Koreans, with their tell-tale lapel pins bearing images of past leaders, have returned to Dandong. At the city’s lone border crossing, dozens milled about with bags bulging as they waited for a bus home.

Chinese tourist Liu led a group of seven friends the other way, back to China.”We wanted to see what North Korea is like, how far it has developed,” said the man in his sixties, after two days of sightseeing in Sinuiju across the border.

She told AFP they were lent by another factory, which brought them in before the UN-mandated deadline barring new workers.

The group from northern China booked their tour after Kim visited Beijing in March. The entertainment provided by their hotel included a screening of “The Flower Girl”, written by Kim’s grandfather, Kim Il Sung.

North Korean eateries are also back in business.

The marble Pyongyang Restaurant near the border crossing put on a show of ballads and dance numbers performed by North Korean women in traditional gowns on a recent night. It reopened at the end of March, waitresses said, around the same time that Kim passed through town in his armoured train on the way to his first meeting with Xi.

The restaurant was owned by businesswoman Ma Xiaohong and the Korea National Insurance Corporation, both sanctioned by the US until the North transferred its shares to a local guesthouse last year.

An employee at the guest house told AFP they served as a proxy holder. Its owner, Piao Zhehao, was unreachable across the border.

Inside, Chinese and North Korean diners recently discussed business as they picked at speciality dishes from the North.UN sanctions required the North’s joint ventures abroad to close and China shuttered many of its businesses in January.

A North Korean businessman surnamed Kim said last month’s destruction of his country’s nuclear test site “demonstrates to the world our love of peace.”We are all hoping for a good outcome to the talks, no matter if we can do business or not, we are for peace,” he said.

In Dandong, dozens of companies closed as trade shrivelled, with the bilateral trade down 59 percent in the first four months of the year. Two border traders estimated 400 or 500 of their competitors have closed up shop.

Some have managed to survive, but volumes have shrunk while costs have skyrocketed. Getting products across is more complicated than before, said one businessman.

Today things are looking up: curious Chinese tourists are returning, housing prices are jumping, and some traders have learned how to work around sanctions.

Recently returned from his factory in Sinuiju, he said power had gone out three times on his first day, and four times on the second. “The crazy Trump’s sanctions have hit hard,” he said.

Another Chinese trader summed up the situation: “Those above have policies, we below have countermeasures.”At the Dandong garment factory producing ski and winter apparel, two production floors whirled with activity.

They were not North Korean, she initially said. But then she told AFP they were lent by another factory, which brought them in before the UN-mandated deadline barring new workers.

As the interview ended, she disavowed the workers entirely, even though they had pointed to her office when faced with questions in Chinese they did not understand.”Those workers outside, they belong to others, we have rented out space,” she said. “We have got to pay rent, we can’t just leave it empty.”