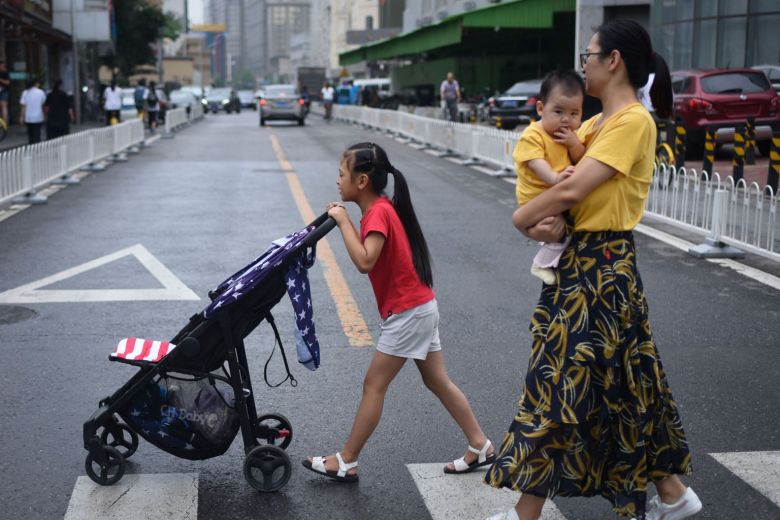 China’s population shrank last year for the first time in 70 years, experts said, warning of a “demographic crisis” that puts pressure on the country’s slowing economy. The world’s most populous nation of some 1.4 billion for decades limited most families to one child in an attempt to keep population growth sustainable.

But since 2016 it has allowed couples to have two children in response to concerns about an ageing society and shrinking workforce. The number of live births nationwide in 2018 fell by 2.5 million year-on-year, contrary to a predicted increase of 790,000 births, according to analysis by US-based academic Yi Fuxian.

Yi, a researcher at the University of Wisconsin-Madison, is a long-term critic of the one-child policy and his work has previously gained traction among the country’s leadership. Enforced through fines but notorious for cases of forced abortions and sterilisation, the one-child policy caused birth rates to plummet after it was introduced in 1979.

However childbirths have not increased as much as forecast since the two-child policy came into force and there has been rising speculation the government will further ease restrictions. Last year marked a “historic turning point for the Chinese population”, said Yi, who studied publicly available data on births in towns and villages across China.

This downward trend may be irreversible, he cautioned, due to factors such as a decrease in the number of women of childbearing age and the reluctance of couples to have children due to rising education, health and housing costs. Yi’s calculations show that the number of deaths in 2018 was about 11.58 million and the total population shrank by 1.27 million.

Read more: Population explosion: A bomb as dangerous as nukes

“The Chinese population has started to decrease for the first time since the founding of New China in 1949, the ageing problem has accelerated, and economic vitality has weakened,” he told AFP. Yi’s findings, due to appear in an upcoming research paper co-authored with Peking University economist Su Jian, were pieced together from National Health Commission figures.

The world’s most populous nation of some 1.4 billion for decades limited most families to one child in an attempt to keep population growth sustainable.

In the meantime, data released by some local authorities indicate a significant drop in births last year. In Qingdao, a city in eastern Shandong province — one of China’s most populous regions — births between January and November decreased by 21 percent to just over 81,000 compared to the previous year.

Ren Zeping, chief economist at property developer Evergrande Group, wrote in a research note that China is walking into a “demographic crisis” as the easing of the one-child policy has failed to boost the country’s fertility rate.

Read more: Khyber to Karachi: How will Pakistan match its population boom? –…

Tracking China’s demographic changes is difficult as the figures published by the health commission and statistics bureau do not always match, said He Yafu, an independent demographer based in southern Guangdong province. But he said Yi’s estimate of the drop in children born in 2018 is likely to be correct.

The number of women of childbearing age is expected to fall by more than 39 percent over the next decade and China’s two-child policy isn’t enough to shore up dwindling birth rates, He added. Yi said he was sceptical of the National Bureau of Statistics figures, accusing the organisation of “inflating the number of births” to account for families who may not have registered their second, third or fourth child.

Local authorities seeking more funds from the central government have also “over-reported” school enrolment figures and hospital live births, he said. Yi added that the statistics bureau may have also under-reported the number of deaths.

In 2016, Yi was invited to speak at the Boao Forum in southwest China, an annual gathering of influential figures including politicians and businesspeople — the same year Beijing announced an end to its one-child rule. He is now urging the government to get out of people’s bedrooms by scrapping the two-child limit and offering more incentives including generous maternity leave and tax breaks for parents.

If the government doesn’t intervene now, “China’s ageing crisis will be more severe than Japan, and the economic outlook will be bleaker than Japan”, Yi said. China’s labour force is becoming smaller as the population greys, putting intense strain on the country’s fragile pension and healthcare systems.

For each elderly citizen, there are seven people who are working and contributing to the social welfare system, Yi said — a figure set to shrink to just four by 2030. “The US economy will not be overtaken by China, but by India, which has a younger population,” he said.

“China’s economic vitality will continue to decline, which will bring about a disastrous impact on the global economy.”

West’s vigorous plan to counter Chinese influence in the Pacific