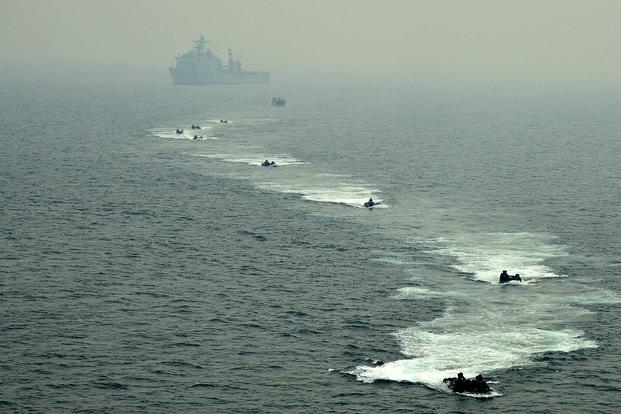 South China Sea has been a scene of increasing Sino-US tensions for the past one decade. US government and media have often describe China as an assertive power that is trying to browbeat US allies in the region. Chinese media have discussed the US as a bully that is creating tensions to contain China even in its immediate neighborhood. The role of British maritime power in 19th century that reduced Chinese emperors to mere vassals is remembered as national humiliation. Within this context, Chinese navy’s seizure of an unmanned US naval drone has rung alarm bells in Washington and its allies across the region.

US sources claim that Chinese navy audaciously picked up the US drone from within international waters close to US ally, Philippines. And that this is a signal of Chinese assertiveness in South China sea. Chinese government’s counter view is that US drone was seized inside Chinese waters and this kind of penetration for surveillance into Chinese territory is a worrisome sign of US bellicosity.

US View on Chinese Actions

However according to a report in New York Times, by Jane Perlez, “in the eyes of America’s friends in Asia, the brazen maneuver to launch an operation against an American Navy vessel in international waters in the South China Sea has raised questions” and many amongst the US allies see this as a deliberate taunt to President-elect Donald J. Trump, who had earlier challenged the One China policy on Taiwan and had vowed to deal forcefully with Beijing in trade and other issues.

After some discussions at the National Security Council, in Washington, the Obama administration demanded from China to return the US drone. On Saturday, China said it would comply with the request. But US sources are concerned that Chinese have not specified when and how the drone will be returned. Chinese have merely said that it will be returned at an appropriate time in an appropriate manner.

American analysts fear that China will be emboldened by having carried out an act that amounted to hybrid warfare, under a threshold that has not provoked the US response.

“Allies and observers will find it hard not to conclude this represents another diminishment of American authority in the region,” said Douglas H. Paal, the vice president for studies at the Carnegie Endowment for International Peace.

US sources claim that the Chinese grabbed the drone not only in international waters but outside even the “nine-dash line” that China uses as a marker for its claims in the South China Sea. US analysts fear that, with this action, Beijing is making the point forcibly that the entire South China Sea is its preserve. United States, however, considers it entirely legal to conduct military and intelligence operations in waters within 200 miles of the Philippines.

Increasing Chinese Assertiveness in past decade

US analysts are worried that in the last dozen years, China has steadily showed off its growing military prowess to the countries around the South China Sea. And that this incident will only reinforce the fears of the US allies in the region. Region absorbs trillions of dollars of world trade and China considers this area important for its strategic access to the Western Pacific and the Indian Ocean. Its is already working on its much trumpeted ‘One Belt One Road” initiative under which its constructing a trade corridor through its traditional ally, Pakistan, connecting western China with the Arabian ocean, at the port of Gawadar.

US analysts argue that as China has built up its navy and its submarine fleet in the last decade, it has also emphasized what it calls its “inherent” right to dominate the regional seas, and to challenge the presence of the United States, its allies and partners in Asia. Chinese sources, on the other hand, insist that the United States is following an increasingly aggressive policy close to Chinese shores to keep China under pressure.

Too many, in the US, this event reminds them of a similar incident in 2001. Immediately after President George W. Bush came to office, an American spy aircraft, an EP-3, was forced to land on Hainan Island after colliding with a Chinese fighter jet. The Chinese stripped the plane of its assets and returned it broken down to its parts and packed in boxes. US sources fear that the same will now happen to the naval drone. When Black Hawk helicopter was downed in Abottabad, during the raid to kill Osama Bin Laden in 2011, Pakistanis had first allowed Chinese to examine the parts of broken down Black Hawk, before returning it to the US.

US analysts fear that regional leaders like President Rodrigo Duterte of the Philippines will feel validated in a pivot away from the United States toward China. And Chinese assertiveness will create pressures upon Japan, and Vietnam and other countries reaching as far away as Australia who look towards the United States for security. But Chinese sources are arguing that the United States is deliberately building up a scenario of confrontation where none exists.

US analysts argue that under a new assertive and muscular vision, China is trying to take control of the waters from Indonesia to Brunei, to Malaysia, the Philippines and up to Japan.

Trump threatens to block funding to WHO for being China-centric