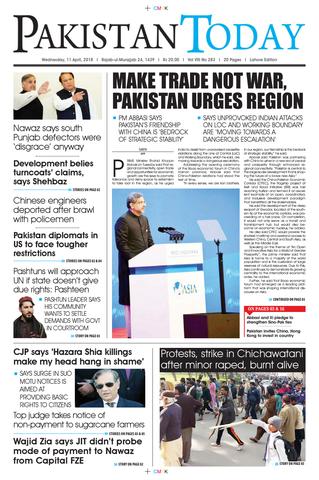 Chief Justice of Pakistan, Mian Saqib Nisar, took Suo Motu notice of the rape and the murder of an eight-year-old girl in Chichawatni Tehsil of Sahiwal.

The top judge – who is actively pursuing cases of public importance, sparking concerns about judicial activism – has demanded a report of the incident from Punjab’s Inspector General of Police Captain (r) Arif Nawaz within the 24 hours.

Read more: Little Zainabs will continue to be raped, murdered & dumped on…

The case relates to Noor Fatima, who had left her home to buy sweets on Sunday but did not return for a while following which her family and neighbors started searching for her.

Tragically, Fatima was found in a street in an unconscious state and was covered in burns. The second grader was rushed to Tehsil Headquarters (THQ) Hospital, from where she was referred to Jinnah Hospital in Lahore due to her precarious condition.

The doctors have stated that the victim received 70 to 80 percent burns.  The girl died during her treatment on Monday night, triggering outrage in the area. A full strike was observed on Tuesday, the day of her funeral. The protesters demanded immediate and stern action against the unknown suspects.

Read more: Chief Justice of Pakistan on a mission to reform the justice…

Surprisingly, Sahiwal District Police Officer (DPO) Atif Ikram held an altogether different view regarding the incident claiming that the victim ‘was neither raped nor murdered’.

The police officer claimed that no one had set Fatima on fire and the fireworks, the girl bought from the shop went off. They further added that some women in the area tried to douse the fire and took the girl, whom he considered mentally unstable, to their house and later handed her to her family.

The police observation seems startling and opposed to the public viewpoint.  However, they have vowed to arrest the unknown culprits soon.

The police registered a complaint against the unknown persons under Section 302 (premeditated murder) of the Pakistan Penal Code, but rape charges have not been listed due to the pending forensic report.

Despite Ikram’s assertion, City police station Station House Officer (SHO) Qazi Basit said the police were still investigating the ‘fireworks’ angle of the case. However, according to sources police had taken 10 people into custody for questioning.

Punjab Chief Minister, Shahbaz Sharif, had also taken notice of the murder – as a standard practice of his conflict management mechanism – and formed an investigation team comprising of four members.

Though the case is being widely discussed in mainstream and social media, proceedings of the case are being concealed and officials are hesitant to reveal any information to the journalists.

The cases of sexual violence in the Muslim majority state are mushrooming and the most noticeable incident of the year was the brutal rape and murder of Zainab Ansari from Kasur.

After the incident, the top judge took notice following which ‘Imran’ was arrested and a subsequent trial was launched with Imran facing a death sentence for four times.

The incident also triggered demands that the accuser should be hanged publicly to set a precedent, however, the proposal is still languishing in power corridors, with Zainab’s family demanding public hanging.

Read more: Another ‘Zainab’ raped and killed in Jaranwala: An epidemic of child…

The top judge not only took notice of Zainab’s murder but also launched investigations into the explosive revelations made by television anchor Dr. Shaid Masood that Imran had links with a sitting federal minister and operated approximately thirty-seven bank accounts. Masood begged the judge to look into the matter claiming that Imran was part of an international pornographic wing. However, in front of a plethora of media personalities, the anchor failed to present any evidence as he appeared before the top judge at the Lahore Registry on January 28, 2018.

The top court also formed another Joint Investigative Team specifically to look into the alarming claims made by Dr. Shahid Masood on air, however, after a few hearings, it was substantiated that there was no substance to what Masood claimed.

Read more: Zainab atrocity brings to light other rape cases in the country

The non-factual claims of Dr. Shahid Masood cost him a three-month blackout as the apex court rejected his apology. However, the anchor still advocates his point of view regarding the existence of pornographic rings.

It seems that the accuser in the Noor Fatima case, who is still at large, would now be nabbed in few days. As the police chief would be presenting a report before the Supreme Court on Friday.