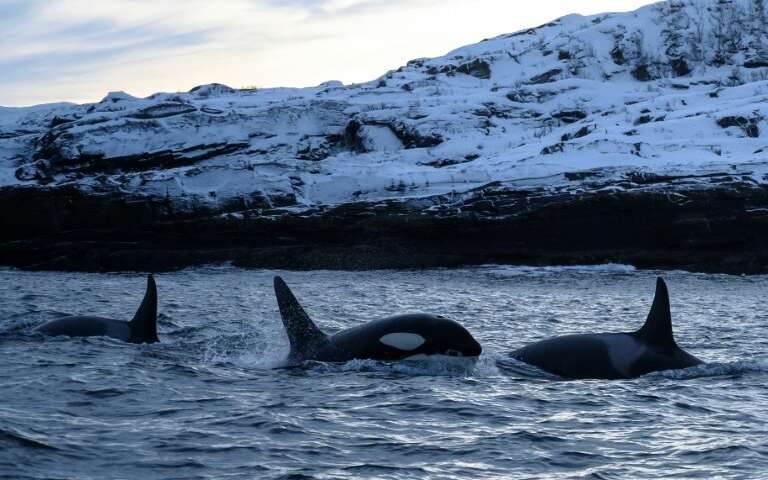 Paying no attention to nearby divers, a killer whale and her calf hunting for food frolic in a snowy Norwegian fjord. Their favorite meal, herring, abounds, but climate change means both predator and prey must increasingly migrate further north.

The clear and calm waters of Reisafjorden, in Norway’s Far North, have in recent years become the winter playground of the Scandinavian country’s killer whale population. At three degrees Celsius (37 Fahrenheit), the cold water is perfect for the herring which, ahead of the spawning season in February and March, have fattened up and make a tasty dish for the hungry killer whales, also known as orcas.

In addition to global warming, fishing and growing numbers of tourists who flock to the region for whale watching and diving pose a threat to the killer whales, says Robert de Latour.

As if they were performing an underwater ballet, the whales encircle a school of herring, forcing them up to the surface before slapping the water with their large tail fins to stun them. “Then they all share the feast,” eating only the best parts of the fish: the eggs, meat, and semen, explains Pierre Robert de Latour, founder of the organization Undersea Soft Encounter Alliance, on board a whale-watching vessel.

“It’s food that’s easy to hunt, available in great quantities, and very high in calories,” he says. But in the past 20 years, the herring migrated 300 kilometers (190 miles) north, leaving the Lofoten Islands in search of waters that remain under six degrees Celsius the temperature required for them to reproduce.

The Norwegian killer whales, which only occasionally feast on seals or smaller whales, have followed the herring. “We believe that the global warming which is responsible for the rising water temperatures has pushed the herring further north,” said Robert de Latour.

“In the long term, they’re going to move even further north. If the stocks were to diminish it would be an environmental catastrophe for whales, orcas, seabirds and cod,” he warns.

For now, the killer whale population along Norway’s coast appears to be thriving. Robert de Latour estimates their number at around 1,500, twice what it was two decades ago. The area “is a real nursery, thanks to the abundant resources,” he says. Some researchers say there may even be up to 3,000 orcas in the region, which runs from Norway’s northern mainland up to the Svalbard archipelago and along Greenland’s eastern coast, which has become more accessible as its ice sheet recedes.

After a massive international campaign, Keiko was released into the wild in Iceland, before he headed for Norway one of the only countries in the world that hunts whales, albeit not killer whales.

In addition to global warming, fishing and growing numbers of tourists who flock to the region for whale watching and diving pose a threat to the killer whales, says Robert de Latour.

But, notes Tore Haug of Norway’s Institute of Marine Research in Tromso, “killer whales and fishing vessels targetting herring have co-occurred on the herring fishing grounds for decades,” and that hasn’t prevented the whale stocks from growing.

Ecotourism is booming in the region. It’s not unusual for several boats carrying dozens of amateur divers to converge in the same fjord, with both boats and divers coming within just a few meters (feet) of the giant mammals.

“Norwegian authorities aim to implement some recommended regulations of such activities,” Haug said. “Whale watching is a good way of raising awareness and educating people about these animals and their life in the oceans, but too much could cause some problems,” said Robert de Latour, himself a nature guide.

Fifteen years ago, Hollywood’s most famous killer whale died in a Norwegian fjord. Keiko, a male orca captured in 1979 off Iceland around the age of two, spent most of his life in water theme parks before starring in the 1993 hit movie “Free Willy”.

After a massive international campaign, Keiko was released into the wild in Iceland, before he headed for Norway one of the only countries in the world that hunts whales, albeit not killer whales. He died in December 2003, at the age of 27.

UK will go into an election, but only if EU delays Brexit