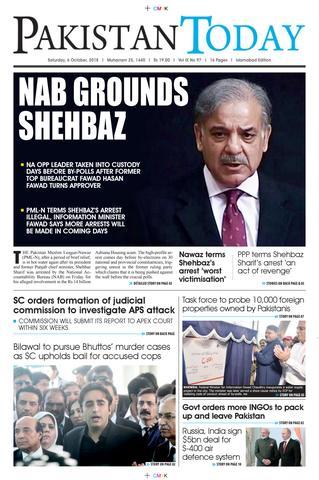 Qaiser Amin Butt, a director of Paragon City (Pvt) Limited has become an approver against PMLN’s leader Khawaja Saad Rafique in the Paragon and Ashiana Housing case. This turn in the case could as well seal the fate of many in the PML-N High Command.

This caused a loss of Rs6 million to the national exchequer. Lahore Casa Developers is a proxy of Paragon City, which is owned by Rafique.

Butt appeared before a judicial magistrate Ahmad Raza and stated that he had started his property business in 1998 and joined PMLN leader Khawaja Saad Rafique in 2002 who introduced Nadeem Zia to Butt and told him that Zia would work with him.

Butt further said that his business started in 2006 with his 50 percent share but later Nadeem Zia became a shareholder of 92 percent of the business. Butt alleged that he was deprived of his shares as he had 50 percent partnership in the business. Qaiser had been arrested in the infamous Paragon Housing Society scandal in which top government functionaries and PMLN leadership are involved.

According to NAB, the Paragon Housing Society doesn’t have LDA’s approval. Butt along with Nadeem Zia and others launched the housing scheme, on the basis of forged and fabricated documents. Butt, the director of said society was allegedly unlawfully running the scheme; he aided Nadeem Zia and other in cheating people by issuing allotment letter of commercial and residential plots on the basis of land that is not the property of Paragon housing Society. Thus the accused has illegally collected funds from the general public.

NAB has booked Khawaja Saad Rafique and his brother Salman Rafique under three cases pertaining to Paragon housing scam, the Ashiana Housing Scheme and corruption in railways. The Lahore High Court has extended the interim bail of Khawaja brothers in the same Paragon Housing Society scandal till December 5.

The noose has been tightening against Khawaja Saad Rafique, who has been getting an extension in pre-arrest bail for months now.

Being partners in a Paragon housing scheme, both the accused reportedly benefited from Ashiyana Iqbal housing scheme through Paragon housing scheme. The Bureau had launched an investigation into the scandal after protests by victims. Former Lahore Development Authority DG Ahad Cheema and others are already in the NAB custody over the corruption allegations.

The opposition leader, PMLN’s Shahbaz Sharif has already been in the custody of NAB for his involvement in the Ashiana housing scam. He allegedly canceled the contract of a company that won the bidding for the Ashiana-e-Iqbal Housing scheme and awarded it to another company, Lahore Casa Developers.

This caused a loss of Rs6 million to the national exchequer. Lahore Casa Developers is a proxy of Paragon City, which is owned by Rafique.

The noose has been tightening against Khawaja Saad Rafique, who has been getting an extension in pre-arrest bail for months now. His arrest could put the leadership of the PML-N in a quandary as there will be a lack of seasoned leaders in Parliament. The PML-N is already noticeable for its diffused behavior in parliament after the arrest of its leader Shahbaz Sharif.

PM Khan has categorically repeated that no one is above the law and his government will see corrupts meeting the fate they deserve. Top PMLN and PPP leadership including Nawaz Sharif, Shahbaz Sharif, Ishaq Dar, Asif Ali Zardari, is already facing corruption charges. No wonder Khawaja Asif fears arrest too.