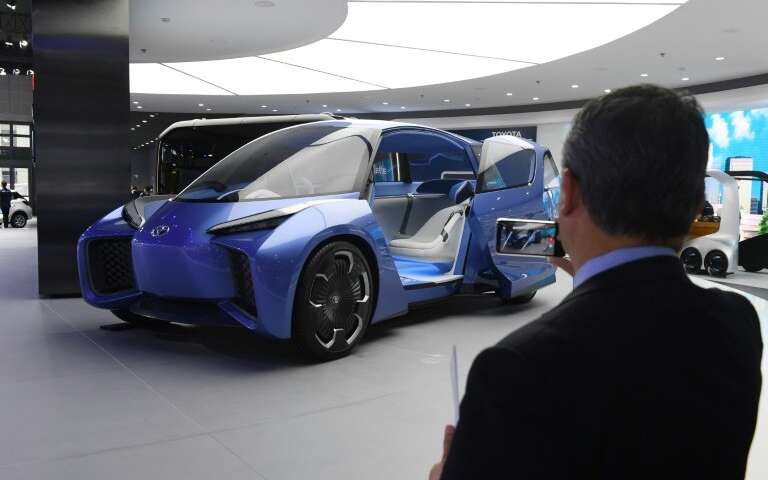 Global automakers are positioning for a brave new world of on-demand transport that will require a car of the future — hyper-connected, autonomous, and shared — and China may become the concept’s laboratory. With ride-hailing services booming and car-sharing not far behind, the need for vehicles tailored to these and other evolving mobility solutions is one of the hottest topics among global automakers gathered for this week’s Shanghai Auto Show.

Nearly all agree that there is no better proving ground than China: its gigantic cities are desperate for answers to gridlock and its population is noted for its ready embrace of high-tech new services. To take advantage of this, manufacturers are competing not only to sell conventional and electric vehicles in the world’s biggest auto market, but also to develop new technologies and even specific interiors designed for the on-demand world.

Chinese authorities are encouraging service firms to build their own fleets, partly to spur the industry and push forward the futuristic transport concept.

“We cannot just develop electric cars. They will have to be smart, interconnected and of course shared,” Zhao Guoqing, vice president of Chinese auto giant Great Wall Motors, said on the auto show’s sidelines. Discussion of China and ride-hailing inevitably involves Didi Chuxing, the country’s omnipresent answer to Uber.

The eagerness of Chinese travellers to hail rides with a smartphone click has unleashed a colossal market: on-demand transport reached $28 billion in turnover in China last year, or about half of global volume, and is expected to double by 2022, according to data firm Statista. Didi accounts for about 90 percent of the Chinese market.

Read more: KIA introduces two new cars and they’re a bit too much

The on-demand potential is bringing automakers and service providers together. Last year, Didi unveiled an alliance of Chinese and foreign manufacturers including Renault, Toyota and Volkswagen, dedicated to exploring ways forward.

And in February, Chinese technology giants Alibaba and Tencent joined hands with several manufacturers to develop a future platform for on-demand transport. “We can no longer be a conventional manufacturer, we must offer mobility solutions, connectivity,” Stephan Wollenstein, director of Volkswagen China, told reporters.

Although a relative newcomer to China’s automotive market, French brand Renault is plunging ahead: its local joint venture with Chinese manufacturer Brilliance Auto delivered 600 personal minivans to Didi in February. “Didi wants to develop such vehicles with many carmakers, which are more adapted to (Didi’s) business, redesigned around the passenger,” said Michael Dong, vice president of Renault-Brilliance-Jinbei.

For one thing, most passenger cars today are designed to squeeze in a family, and thus feature limited space in the back because that’s where the kids normally sit, said Lawrence Petizon, an analyst with AlixPartners. But for ride-hailing or car-sharing, more space is needed in the back to accommodate grown-up passengers.

“The family car is not the right answer,” he said. Didi drivers typically supply their own vehicles, but Chinese authorities are encouraging service firms to build their own fleets, partly to spur the industry and push forward the futuristic transport concept.

Some manufacturers are even dipping their toes into ride-hailing, with Germany’s BMW offering a high-end service in the southwestern Chinese city of Chengdu, and Volkswagen and Mercedes-Benz doing so in Shanghai. “Admittedly, the volumes ordered are still insufficient for mass production but the potential is enormous,” says Dong.

The idea is not confined to China. Daimler and BMW announced in February they would jointly invest “more than one billion euros” to deepen cooperation between their Car2Go and DriveNow services in Europe, in which cars are available for short-term point-to-point use.

Didi unveiled an alliance of Chinese and foreign manufacturers including Renault, Toyota and Volkswagen, dedicated to exploring ways forward.

One thing that seems to certain to eventually change is how cars are bought and sold. “Car manufacturers will no longer provide customers with cars via a one-time sale, but rather with a brand that connects them to the users on a daily basis through the mobility services they offer,” said a recent report by Eurogroup Consulting.

This automotive evolution is expected to accelerate the development of autonomous vehicles, which are already viewed as the future of overall car transport but seem especially suited for urban car-sharing services. Valeo, the French manufacturer of ultrasonic sensors, cameras, and navigational technology, said it received orders totalling one billion euros last year related to the development of “robot-taxis”.

Francois Marion, president of Valeo China, said the global advent of driverless cars is just around the bend. “They will hit the road in carefully charted urban environments, with dedicated lanes on the streets, connected infrastructures guiding them, and programmed itineraries,” he said of the futuristic vision.

“And the companies operating them will always be able to intervene if anything happens to one of the vehicles.” Valeo also is working with Meituan, China’s leader in meal deliveries, to develop a robotic vehicle.