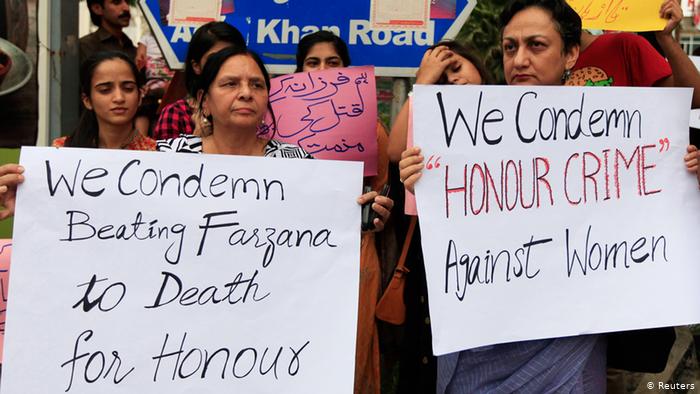 On December 1, a man and a woman were killed in the name of honor in Batyari village, Tank. The same day, the Pakistan Supreme Court expressed it’s fears that the five girls involved in a 2010 dancing video scandal might not be alive.

In the instant case in Tank, victim’s mother-in-law told the police that she had heard the voice of a man in her daughter-in-law’s room at midnight and she then informed her husband about this. They locked the door and alerted their son who, along with another person, reached home in the morning and killed the women and a man named Obaidullah. FIR has been registered and police has started investigation. This is how Pakistan’s English paper, Dawn has covered it.

Kohistan video case, referred to by the Supreme Court (SC), made headlines in 2012 when it was reported that two boys and five girls were allegedly killed by members of their tribe after a mobile phone video of them dancing at a wedding in a remote village emerged on social media. The Supreme Court took suo motu notice on this issue. But the case was subsequently closed by the then Chief Justice, Iftikhar Chaudhary, when the court was informed that the girls were still alive. Dr Farzana Bari, a human rights activist and director of the gender studies department of Quaid-i-Azam University later filed an application to confirm if the girls in the “Kohistan video” case were indeed alive. She stated in her witness statement that, “Photos of the girls taken during the commission session were given to a Reuters’ journalist, Katharine Houreld, who got the matching done through a renowned independent British agency ‘Digital Barriers’. It was found in the said report that the photos of the girls, who were made to appear before the commission, did not match the images of the girls appearing in the said video.”

The SC issued directions on Nov. 27, to district and sessions judge along with the local district police officers and a senior woman police officer to investigate the matter. The commission has reported that the girls involved in a 2010 video scandal might not be alive. Honor killing is a phenomenon throughout the developing world but we see a disproportionately large number of cases in India and Pakistan. According to Honour Based Violence Awareness Network (HBV) the estimated number of cases of honor killing occurring internationally is 5000 per year and 1000 of them are happening in Pakistan alone-and about 1000 each year in India. Human Right Commission of Pakistan (HRCP) database recorded 987 cases of honor crimes in 2015 with 1096 female victims and 88 male victims out of which at least 170 were minors. In 470 cases ages of the victims were not known or reported.

As per the federal law ministry’s data for 2013, there were 66 cases of honor killing in Punjab, 315 in Sindh, 47 in K-P and 28 in Balochistan. Similarly 477 such cases were reported in 2014. 80 of those cases belonged to Punjab, 287 to Sindh, 78 to K-P and 32 to Balochistan. The credibility of official figures on honor killings is not very high because they often go unreported or are passed off as suicide or natural deaths by family members.

Up till recently Pakistani law provided liberty to victim’s family to pardon the murderer if they wished. The Criminal Law (Amendment) Act 2014 declared honor killing a criminal offense but was poorly enforced. The Anti-Honour Killing Laws (Criminal Amendment Bill) 2015 was originally piloted by Senator Sughra Imam, a PPP legislator. Senate passed the bill in March 2015 but it lapsed because it was not taken up by the National assembly in time. Finally, it was given approval in a joint sitting of parliament on Oct. 6, 2016. After the passage of the bill the culprit is no longer able to evade punishment. Even if the victim’s family forgives, life sentence will be awarded to the honor killers. Criminal can only be pardoned of death penalty.

Nawaz Sharif said on this occasion, “I congratulate the Parliament, the NGOs, civil society, academia, media and all those who worked hard and supported us in the passage of this legislation.”

But honor killing is still a widespread phenomenon practiced in Pakistani society. Hundreds of women are killed due to violent customary practices in the name of so-called honor.  It is due to the belief that the victim has brought bad reputation upon the family and honor can be restored with the death of the victim. The preparators, so far, enjoyed protection due to loopholes in Pakistani legal structure. In addition, mind set of male dominated judiciary and police contributed to the matter by supporting and sympathizing with the culprits. It has yet to be seen if the new laws brought against honor killings will reverse the barbaric trend.

Previous articleTrump’s team pulls the carpet from under ‘terrific Nawaz’
Next articlePakistan’s Diplomatic Offensive to build pressure on Narendra Modi?

Shahid Sattar - 18 September 2021
Within the petroleum sector, LNG imports are the subsector that can be substantially mitigated by taking a range of actions. Minimizing import dependence on hydrocarbons, in particular, should be a primary objective to ensure export-led economic growth in Pakistan.