With as many as 340 confirmed cases of those infected with the corona virus in Pakistan as of Thursday 19th, many hysterical media anchors and elite society bigwigs have demanded a complete lockdown of Pakistan.

Armed with the aplomb of limited factual evidence and virtually no concern for what may befall the many millions of daily wage earners, such influencers have been hounding the federal government to impose forced isolation for millions of families.

In a country like Pakistan which does not have and presently cannot afford a sophisticated social welfare system comparable to developed economies, forcing the poorest section of society out of work could prove more catastrophic than all the potential ravages of COVID-19.

Many of those calling for lockdown in Pakistan belong to the elite who seem to have little concern for that many millions will die among the poorest if their daily wages are stopped. Pakistan does not & can’t afford a social welfare system of developed countries

The choices the government therefore faces are grim. In trying to mitigate the worst consequences of the pandemic the options lie between a complete lockdown, in order slowdown the spread of the pandemic; or partial containment where the wheels of economy continue, but runs the risk of the virus spreading faster among a larger percentage of population than under the first alternative.

An economic implosion as result of a lockdown would not only mean mass scale unemployment of the poorest sections of society, but potentially also disrupt essentials like fuel and food, and therefore lead to widespread malnutrition and increased incidence of other diseases. With the absence of social welfare facilities such a scenario could imply starvation and a larger number of fatalities than would have been the case with the pandemic spreading in the first place. Between the extremes the government has to carefully modulate its response not to meet the demands of the elite, but rather to ensure the welfare of the vast majority of poor in Pakistan.

Curiously, the same elite section of society and the media who were screaming for students to brought back from China are today demanding complete lockdown.

Interestingly many of same group are howling in anguish against the CAA measures to restrict entry into Pakistan by air flights to those bearing certificate of COVID free.  It may have something to do with the fact that the affluent are most affected by the flight restrictions, while its impact on the daily wage earners is minimal.

Shocking decision by Civil Aviation Authority that all international passenger including Pakistanis coming back home must get a Corona Test. where in the world a test is done without symptoms? How come other countries will fulfil this wishful testing? Who will pay hell of amount? pic.twitter.com/2gKFGMPYhP

So 80plus #CoronaVirus cases. Why like KSA all flights not discontinued? Still no complete lockdown, citizens going 4 tests being refused in LHR/Isbd if they havent travelled abroad recently; ventilators shortage.We need to clear this mess.Bring in Chinese experts/equipment

This surely must be withdrawn !! Is this even practical ? It’s crazy for several reasons 1. No one can just go and get at will a CV test done 2. You can’t get CV test result done within 3 days. Actually govt must check ppl on arrival. pic.twitter.com/Vhmi33ebAY

The response of the elite, as always, in Pakistan is to focus on this global crisis through their own selfish lens, rather than how the vast majority of poor might be impacted. It is therefore not surprising that the privileged are very concerned about PSX falling, and making noises for a stock exchange bailout, even if the number of investors directly impacted are less than 50,000.

Most such well healed investors and speculators in the stock market are unlikely to suffer mortally even if KSE100 were to fall below 10,000. The liberal English-speaking elite who would have screamed blue murder if the Aurat March had been in anyway restricted (which took place as the pandemic was developing), but go hoarse demanding closure of mosques and places of worship that most of the poor attend. Consistency be dammed!

Numbers are pulled out of thin air to make claims about millions dyeing even if 50% of the population were to be infected. There’s little empirical evidence to support that. Superimposing Pakistan’s demographics from 2007 and the data on fatality rates among different age cohorts, the latest Research on CoronaVirus by Imperial college (see Table1) below, the estimated fatalities would appear to be as high as 100,000 (Table 2). 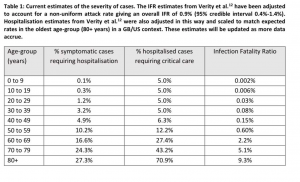 If we assumed much higher fatality rates than suggested by the Imperial College, the number could is likely to reach anything between 500,000 to 600,000. Given the sanctity of human life any number too high, but in making policy decisions all governments have to sometimes weigh the consequences of their actions between impossibly and ordinarily unacceptable alternatives. In the present scenario the choice could be between at worse hundreds of thousands dying as a result of the pandemic  versus the many millions among the poor dying due to malnutrition and other diseases as a result of a complete lockdown.

Table 2: Expected fatality if 100% of population infect with COVID

Before making hysteric demand those clamoring for a total lockdown may want to consider that it could also result in a complete breakdown of the food supply chain. That has all the possibility of causing a manmade famine, and consequently tens of millions starving. Starvations itself results in spread of epidemics and millions perish.

read more: How can Pakistan use the Coronavirus pandemic for its benefit?

It is worth also noting that South Korea ($29,700, GDP per capita), which was one of the first epicenters of COVID, did not opt for a complete lockdown. It has nevertheless still managed to severely curtail the spread of the virus such that new cases per day has fallen from peak of about a thousand to presently below 60.

Those insisting for complete lockdown should also appreciate that there’s the additional problem of violence and crime. In developing countries, where people have little savings they can’t afford to sit idle at home. In case of extreme need, some may resort to crime to feed themselves.

In a global crisis such as the one humanity collectively faces today, it is incumbent on the privileged elite, who might actually be the most contagious vectors given that they travel extensively as well as large numbers of interaction to isolate themselves. It may be that that the poor masses that require protection from them. Moreover, the affluent can always afford to stay home. The same luxury does not apply to the poor.

Javed Hassan is investment banker who has worked in London, Hong Kong, and Karachi. He tweets as @javedhassan. The views expressed in this article are author’s own and do not necessarily reflect the editorial policy of GVS.

Atia Ali Kazmi - August 3, 2020
Southern Asia’s politics is being intensely driven by the varying dynamics and developments of China-Pakistan Economic Corridor. Even a single project’s take-off in Pakistan...

Microsoft seeks to acquire TikTok after talks with Trump

Will China collapse for lack of inclusive institutions?

Coronavirus: Is Olympics being canceled?

Coronavirus Fear: Is School Closure the only Solution?