Coronavirus during Eid: The Impact on Celebrations

The Coronavirus lockdown leads to a more low-key Eid for Muslims around the world. The usual hustle-bustle of Eid has been replaced by a more somber affair, as fears of infection have rendered Muslims unable to hold celebratory gatherings and even Eid prayers. 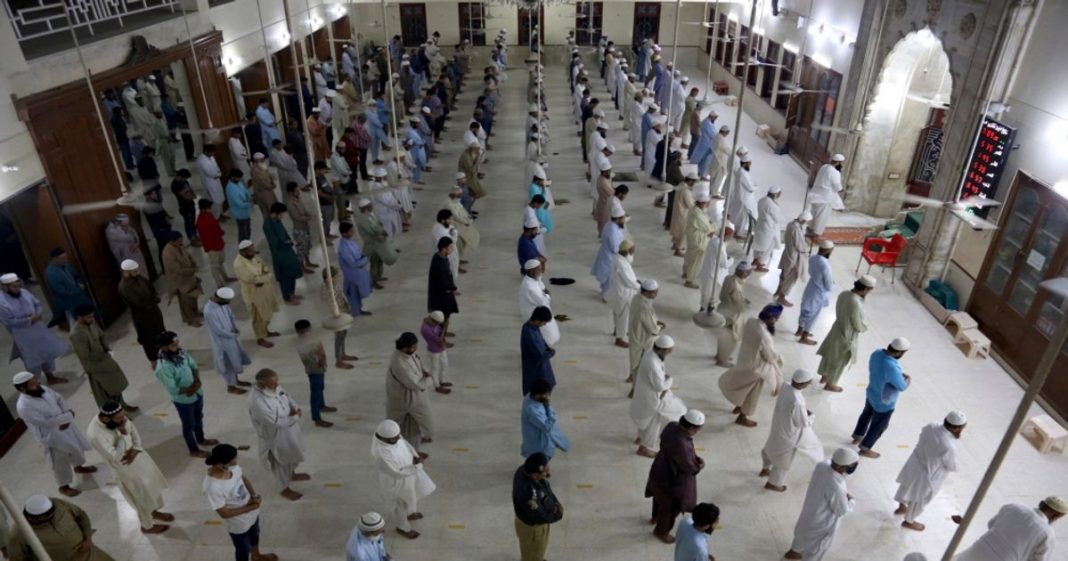 Muslims around the world began marking a sombre Eid al-Fitr Sunday, many under coronavirus lockdown, but lax restrictions offered respite to worshippers in some countries despite fears of skyrocketing infections.

The three-day festival, which marks the end of the holy month of Ramadan, is traditionally celebrated with mosque prayers, family feasts and shopping for new clothes, gifts and sweet treats.

But this year, the celebration is overshadowed by the fast-spreading coronavirus, with many countries tightening lockdown restrictions after a partial easing during Ramadan led to a sharp spike in infections.

Impact of Coronavirus on Eid Celebrations in Pakistan

As part of precautionary measures against Covid-19, the Sindh government on Thursday imposed a ban on swimming and bathing in sea and canals on the eve of Eidul-Fitr. Considering the request of commissioners Karachi and Hyderabad, the home department has decided to impose a ban on bathing and swimming on the eve of the upcoming Eid.

The Lahore High Court (LHC) on Thursday also turned down a plea for permission to open parks and other recreational spots across the province on the occasion of Eidul Fitr.

The holiday began on a sombre note after a Pakistan International Airline flight crashed Friday in the southern city of Karachi, killing 97 people including many who were travelling to see family for the holiday.

The English daily Dawn said the crash, along with the pandemic, had robbed Pakistan of “whatever little joy had been left at the prospect of Eid festivities”.

Lockdowns imposed for Coronavirus during Eid in most countries

Further dampening the festive spirit, many countries — from Saudi Arabia to Egypt, Turkey and Syria — have banned mass prayer gatherings to limit the spread of the disease.

Saudi Arabia, home to Islam’s holiest sites, began a five-day round-the-clock curfew from Saturday after infections more than quadrupled since the start of Ramadan to over 72,000 — the highest in the Gulf.

Mecca’s Grand Mosque has been almost devoid of worshippers since March, with a stunning emptiness enveloping the sacred Kaaba — the large cube-shaped structure towards which Muslims around the world pray.

But on Sunday, an imam stood on a podium while Saudi security forces, some wearing masks, positioned themselves between rows of worshippers who gathered before the Kaaba for Eid prayers.

A small number of worshippers gather this morning before the Kaaba at the Grand Mosque in #Mecca to attend the Eid al-Fitr prayers amid #coronavirus global lockdown.https://t.co/8WjtVmBIpk pic.twitter.com/QQ4Lg9QGHP— Al Arabiya English (@AlArabiya_Eng) May 24, 2020

Loosened restrictions on lockdowns in some countries

“Eid is not Eid with the atmosphere of coronavirus — people feel a sense of fear,” worshipper Akram Taher said.

In Afghanistan, the Taliban announced a three-day ceasefire to mark Eid al-Fitr in a surprise move following months of bloody fighting with Afghan forces after the signing of a landmark agreement with the United States. Interestingly, they dismissed a government call for a Ramadan ceasefire in Afghanistan, saying a truce is “not rational” as they ramped up attacks on government forces.

The streets of Kabul were mostly empty as part of a strict lockdown, but some people did venture out and greet each other — some from a distance and others hugging and shaking hands despite calls for social distancing.

At Jerusalem’s Al-Aqsa mosque, Islam’s third-holiest site after Mecca and Medina, prayers were not permitted inside, although the site is expected to reopen after the Eid holiday.

The mosque remains closed because of the coronavirus pandemic but Palestinian residents of Jerusalem went to the holy site to pray as close to it as possible. Scuffles broke out between Israeli security forces and worshippers gathering around the mosque at dawn, although prayers eventually went ahead outside, an AFP photographer said.

In Somalia, at least five people were killed and more than 20 wounded in a blast during Eid festivities, police said.

The blast occurred as a crowd of people were dancing and singing, a witness said, but the cause of the explosion was unclear.

In Indian-administered Kashmir, another trouble spot, Eid celebrations were muted under the coronavirus restrictions and as authorities tightened the screws after a spate of clashes between government forces and rebels. No Eid prayers were offered for the second consecutive time in major mosques and shrines of Kashmir as police enforced restrictions in most parts of the valley including Srinagar city, officials said.

Celebrating despite fears of a ‘new peak’ of Coronavirus during Eid

Ahead of the holiday, Muslims across Asia — from Indonesia to Pakistan, Malaysia and Afghanistan — had thronged markets to shop, flouting coronavirus guidelines and sometimes even police attempts to disperse large crowds.

“For over two months my children were homebound,” said mother of four Ishrat Jahan at a bustling market in the Pakistani city of Rawalpindi.

“This feast is for the kids, and if they can’t celebrate it with new garments, there is no point in us working so hard throughout the year.”

In Indonesia — the world’s most populous Muslim nation — people turned to smugglers and fake travel documents to get around bans on the annual end-of-Ramadan travel that could send infections soaring.

In the conservative province of Aceh, large groups prayed together with few masks and little social distancing as Eid began, and the Baiturrahman Grand Mosque in the provincial capital was packed.

“I did feel worried but as a Muslim, I still had to perform mass Eid prayers as a form of gratitude to Allah,” one worshipper, Arsi, said.

COVID-19 death tolls across the Middle East and Asia have been lower than in Europe and the United States, but numbers are rising steadily, sparking fears the virus may overwhelm often underfunded healthcare systems.

Coronavirus: the reason for a lacklustre Eid

Iran, which has experienced the Middle East’s deadliest outbreak, called on its citizens to avoid travel during Eid as it battles to control the virus.

The United Arab Emirates has tightened its lockdown which had been relaxed during Ramadan, but that did not stop some families from planning getaways to luxury beachfront hotels.

But in many countries, Muslims steeled themselves for frugal celebrations amid growing financial distress, including falling oil prices that plunged the Gulf region into its worst economic crisis in decades.

In the Syrian capital Damascus, Eid shoppers rummaged through flea markets for clothes at bargain prices as the war-ravaged and sanctions-hit country grappled with a much more entrenched economic crisis.

“The flea market is the only place I can buy something new to wear for the Eid holidays,” 28-year-old Sham Alloush said.

“Had it not been for this place, I wouldn’t have been able to buy new clothes at all.”

Victims of war: 23 civilians killed in US airstrike