Pakistan’s textile orders valuing US$1.3 Billion have been postponed or cancelled. On the global front, in 2020, COVID-19 will wipe off more than $300 billion from the global apparel market, a nearly 25% decline from last year. 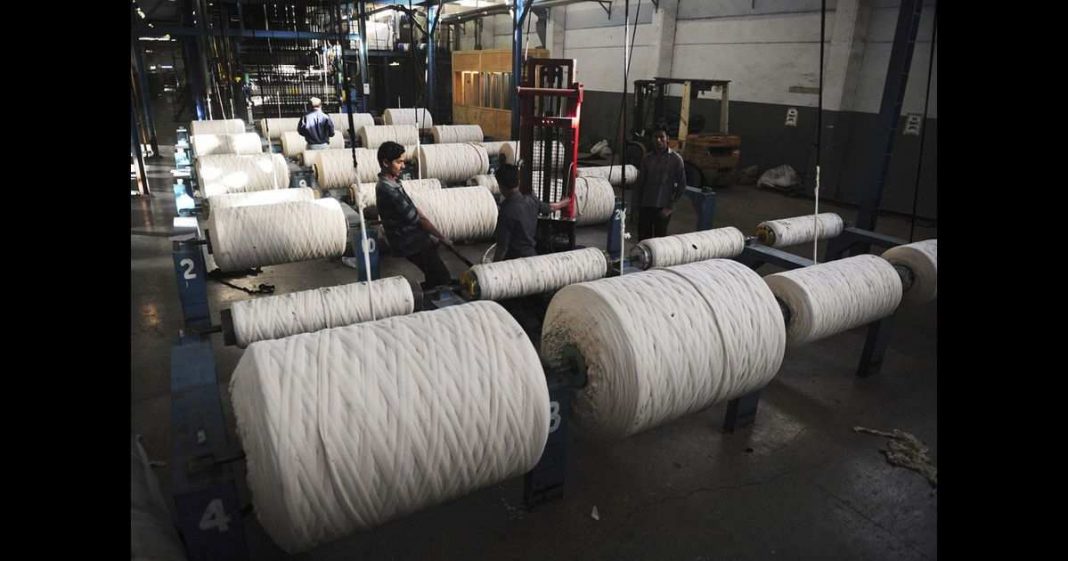 The current situation with Pakistani Textiles is rather precarious. In April 2020, textile exports declined by 65% to $404 million, against exports of $11,139 million during the same month in the previous year. May 2020 is not looking good either as nearly 75% of the present installed capacity within the textile industry is based on exports. This erosion of such volumes, by any stretch of the imagination, makes it to be an alarming situation.

The falling textile exports are likely to have serious implications in the coming days, both on the trade deficit equation and also on the unemployment level in the country, post-COVID-19. The industry accounts for nearly 67% of national exports, 12% of GDP and 40% of Industrial Employment. Hence, it is imperative that it gets back on its feet with all cylinders firing, sooner rather than later.

Read more: Is the government going to open industries & markets on May 10?

Impact of COVID-19 on global markets

On the global front, according to industry estimates, in 2020 COVID-19 will wipe off more than $300 billion from the global apparel market, a nearly 25% decline from last year. The United States will account for 42% of this loss. Apparel demand from other worst-hit Western countries is also expected to drop by around 30% this year. In 2019 the global apparel market was worth around $200 billion, a figure that is now not expected to decrease till 2023.

Furthermore, the US retail sales dropped almost twice as much in April 2020 than in March, as its economy saw its first full month where most businesses were completely closed because of COVID-19 lockdown. During the process, clothing retailers were particularly hard hit.

With the EU and USA being the two largest markets respectively, there have been a very high number of cases for Pakistani exporters where the customers have either cancelled orders or simply reneged on their contracts. Since most exports are transacted on CAD or CA (Credit) terms, this poses to be a huge problem with no real leverage on the US and EU companies backing out of their commitments. The overall demand, both domestic & international, as we know, is in any case subdued due to COVID-19 and respective lockdowns almost in every country.

Meanwhile, to make matters worse, both domestic and global yarn and cotton prices have crashed, which is never a good sign for the sector, because it adds to the uncertainty. It is estimated that Pakistan’s textile orders valuing US$1.3 Billion have so far been postponed or cancelled. Major buying chains of textile products namely Inditex Group, JC Penney, Mango, H&M, Kohls, GAP, Zara, Levis, Bed, Bath & Beyond, Nike, Peacock, American Eagle, IKEA have all deferred or cancelled their orders in addition to delays in paying for shipments that are either on waters or have already reached their destinations.

Add to this the issue arising specifically from the buyers of products relating to the hoteling and tourism industry, where most have just outrightly reneged from their orders/agreements claiming that they see no hope of revival of the tourism industry in the near future. Pakistan’s total annual exports to the EU countries and the USA exceeds $10 billion, which means that even by conservative accounts, the various deferments or cancellations already done has lessened the amount to almost $2.5 billion – a sum likely to be lost or stuck-up visibly for at least the next six months.

Future of the Pakistani textile industry

So what does this mean for Pakistan’s export-oriented textile industry and what are the solutions, if any? The mere continuity of restrictions (local & global) in general for a longer period is fraught with risks to the textile industry of Pakistan. This situation will lead to serious cash flow and liquidity constraints. The cash flow crisis is likely to be so severe that many companies may find it impossible to maintain operations resulting in both bankruptcies and the massive layoff of workers.

Even by conservative estimates, this recession and collapse of the aggregate demand of the world are likely to be far more severe than what was witnessed in 2008-2009. Meaning, in essence, what this implies is that the main issue that will be faced by the Pakistani Textile Exporting Companies is of “liquidity”.

Pakistani textile market: how to curtail the impact of COVID-19

Everyone knows, that in the international markets once a customer is lost, it tends to be very difficult to win it back, especially in the short term.

A timely state support to simply ensure that exporters remain solvent is going to be critical and if one was to list the measures that the government needs to announce quickly, then in the opinion of this author, the list should look something like this, if not necessarily in the same order:

While surely a lot will depend on how quickly the EU and USA markets recover and by when would the traditional customers of Pakistani Textiles be able to resume buying in a meaningful way, but at the same time a lot will also depend on the Pakistani government on how serious it is to save the textile exporting industry from being dismantled and to what extent it is willing to go in helping them to ride out this critical period till such time when markets gradually return to normalcy!

Dr Kamal Monnoo is a political economist. He is an honorary Consul-General of the Czech Republic in Punjab, and a member Board of Governors of Islamabad Policy Research Institute. (IPRI) He is an author of two books ‘A Study of WTO’, and ‘Economic Management in Pakistan.’ He can be reached at kamal. monnoo@gmail.com. The views expressed in this article are the author’s own and do not necessarily reflect the editorial policy of Global Village Space.